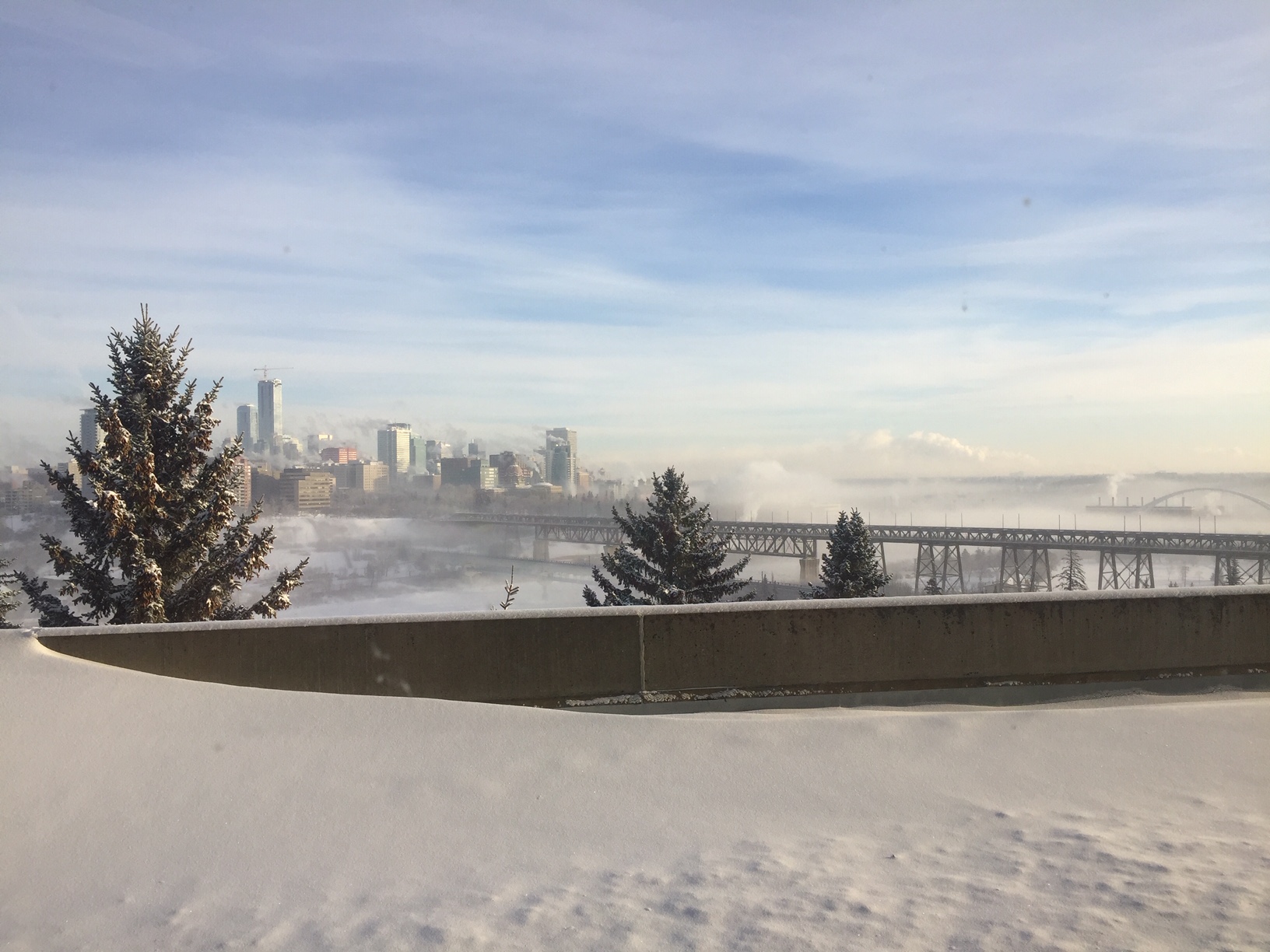 Sunny and deadly! The view outside my office in Humanities

It was -33C this morning when I went to work, the coldest day in Edmonton in a decade. Just three blocks to the bus, but that was enough. I had double socks, double mitts, two sweaters, plus leggings under pants. And then a snood for my neck, a hood (pulled tight) over my head, and a scarf wrapped around the whole mess. I could still feel the frigid air slice through every layer like a hot knife through butter, but it was OK for the short walk.

I hate this. The weather has been below -25C since Thursday last week (it’s now Tuesday). The previous weekend, it was 7C above! And we’ve had about 20 cm of snow.

It used to be that if the temperature was this cold, it would be under blue, snowless skies, but today is the first day we’ve seen the sun. It’s been truly miserable. I haven’t seen Tom for days. Usually we get together on Friday and the weekend, but neither one of us budged from our respective homes. 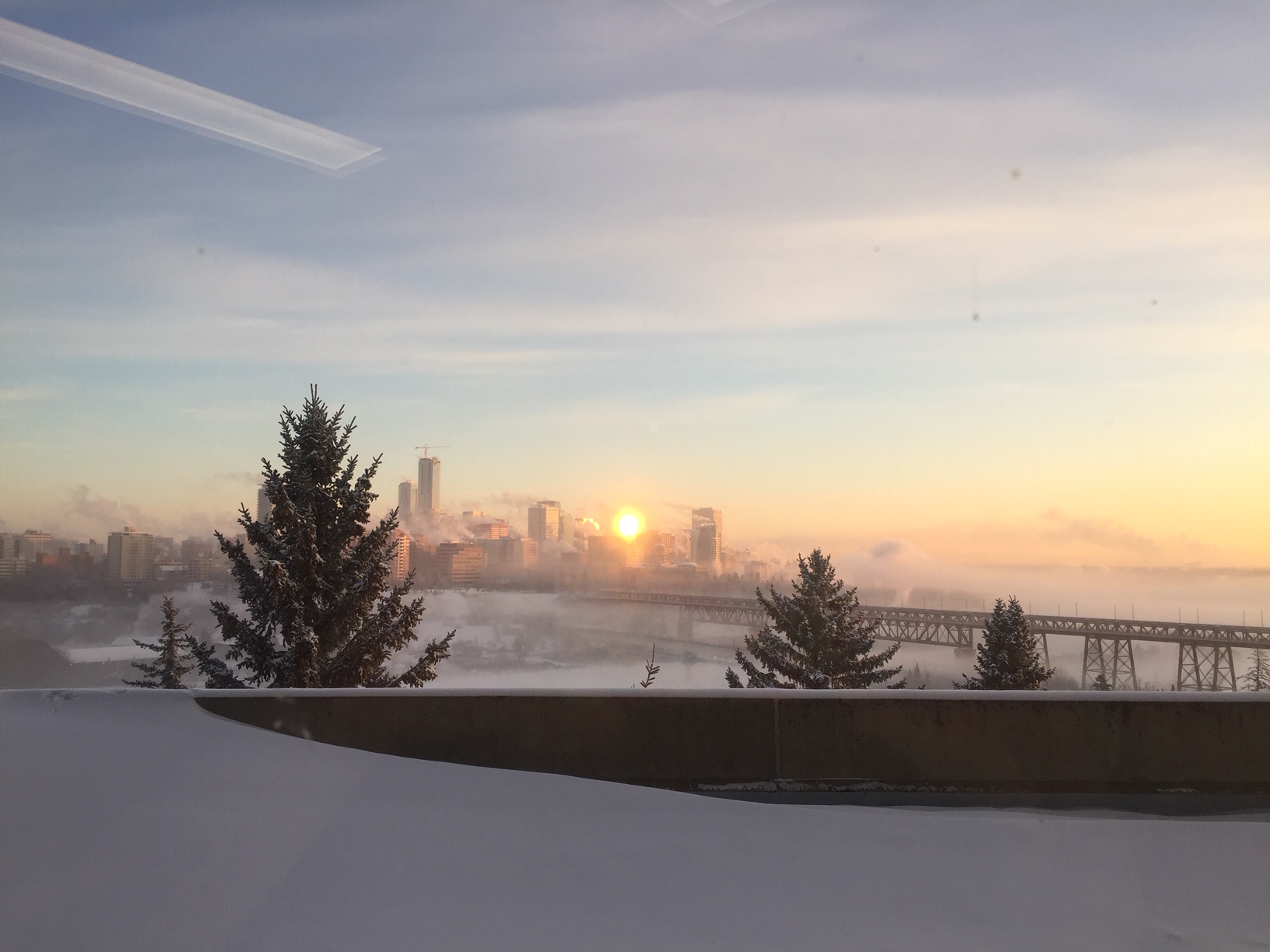 Outside my office in Humanities around 8:30 am

And, my furnace broke on Saturday. I decided to take public transit to my hair appointment that morning because I didn’t want to drive on the snow-covered streets, and when I got home there was a power failure just as I was walking through the door. The power was out for two hours in Oliver and surrounding area, and it got really cold in my place. When the power was restored, the furnace fan came back on but not the furnace. It took until Monday morning to identify and resolve it, and I’m not even sure if it is resolved. They did replace a broken part (the heat pump with the little propeller thingy which in the old pump had totally disappeared), but it’s so cold outside, and my windows are so big and plentiful and single-paned, it’s just not possible to keep the temperature up. That’s my theory anyway. This is the first February in my Oliver home, and the first real cold snap, so it’s all new.

So other than work, I’ve done nothing, and seen no one. It’s very isolating. I miss Tom. I miss not being afraid of my furnace. I miss driving. I miss being truly warm in my apartment. At least I have a roof over my head and multiple duvets.

The good news is that I am going to Scottsdale on Friday. I can’t believe how lucky I am. Sharon will be down there with Stella for the month, Joanne is there right now with Steve, my cousins Cathy and Larry will be there for a few days, and when Joanne and I leave, Vic will join his wife and dog for another week. That condo of theirs has been a real gift. This is the first time I’ve gone for a whole week. Last time I went, in February 2017, we packed a lot in in four days. One thing is for sure, it won’t be -33C! And I will be walking. A LOT. 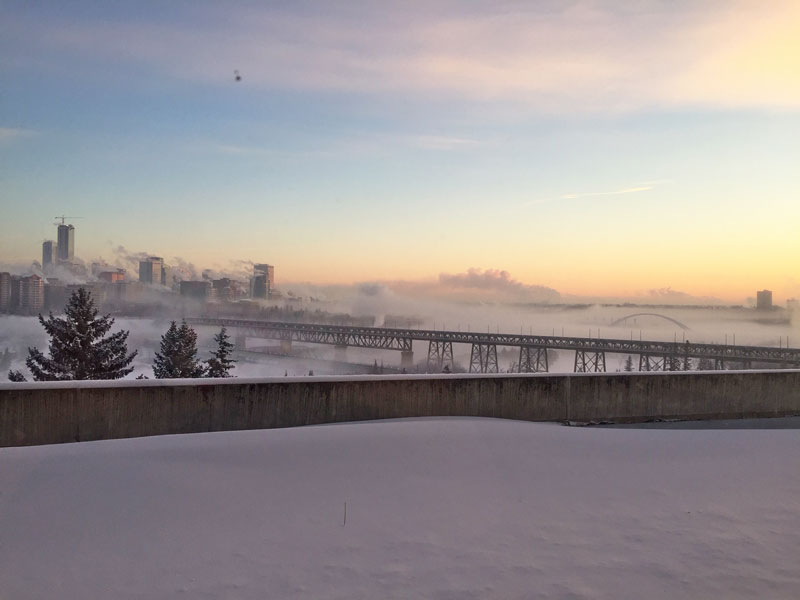 Outside the corner office in Humanities, around 8 am.