I was in paradise, otherwise known as Scottsdale, Arizona, from February 8-15. It was a much-needed reprieve from a month that has seen life-sucking, record-breaking temperatures in Edmonton. According to local weather prognosticators, our city has only been this cold for this long two other times in the last 50 years (2nd longest in the last 30 years), with extreme cold warnings issued almost every day since the beginning of February. (ADDENDUM March 1: We did it! We suffered through the coldest February in the last 40 years! The average temperature for the month has been -19.7 C)

Did I mention I was in paradise for a week?

Sharon was in Scottsdale with Stella for her usual month of holiday. Joanne and Steve traveled at the same time, and I showed up a week later (sans Tom, who won’t travel to the US). On the same day I arrived, my cousin Cathy and her husband Larry also arrived from Winnipeg (via Palm Springs) for a couple of days. For 24 hours there were six people in Sharon and Vic’s condo, plus one large dog. It was a blast!

By mid-week, it was just the sisters, and Stella – an honourary if rather hirsute sibling.

This was the first time that I’ve been down to Scottsdale for more than just a few days. I don’t have a ton of holidays built up since switching jobs, but this seemed like exactly the right thing to do with one of my weeks. How often do I get to spend time with family like this, on holiday? Never.

The weather was on the cool side for most of my stay (around 15C), but we had a few days at plus 20C. It didn’t really matter. It always feels like some kind of miracle to sit on a plane for a few hours, only to disembark in an entirely different climate. One with palm trees, cacti and air that doesn’t want to kill me.

It took a long time for my suitcase to show up, so we were late back to condo. Larry had bought pizza for everyone, which was very kind, and oddly, very apropos. Earlier, while I was still on the plane, the seat belt warning suddenly came on. There was no turbulence, but at that moment the cabin filled with the smell of mushroom pizza. Maybe it was a way of keeping the passengers strapped down while the crew enjoyed a slice or two? No judgement, although my free packet of tiny pretzels suddenly seemed very inadequate.

The next day, after a walk with Stella around the golf course, we all headed to Old Town for a parade, or as it locally known, the Parada del Sol. The day wasn’t exactly sunny, but what it lacked in sol, it more than made up for in Americana, including marching bands, horses and flags. Lots of flags. No MAGA hats, thank god. It was interesting and a nice introduction to Scottsdale life.

Cousins Cathy and Larry at the parade

Sharon and Stella taking a break at the parade

Steve flew back to Edmonton around dinnertime, and we just hung around for the rest of the evening, drinking margaritas, before taking Stella for her final walk, which usually involves a trip down to the pond to see if the night heron was stationed at its usual spot. It was.

The nice thing about walking Stella in Scottsdale, other than walking Stella, is that the birds are very different, and therefore, the ambient sounds very different. No magpies. No chickadees. None of our usual over-winterers. They have grackles, lots of them, hummingbirds, mockingbirds, Gila woodpeckers, starlings, quail, cormorants, egrets, herons, cardinals, some Canada geese (which I warned not to return to Edmonton just yet) and many other birds that we just don’t see, or hear, in Edmonton – at least not at this time of the year, if ever. It was wonderful. A feast for the ears, and one of the biggest pleasures of traveling to this part of the world. 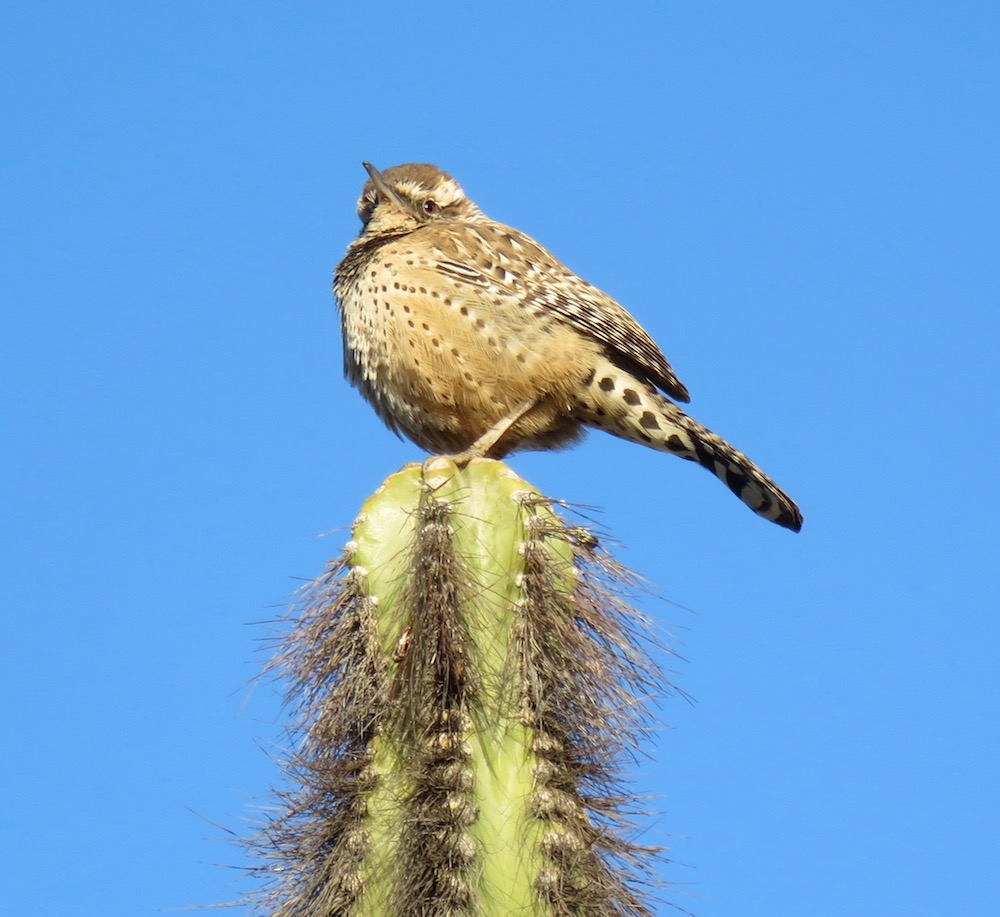 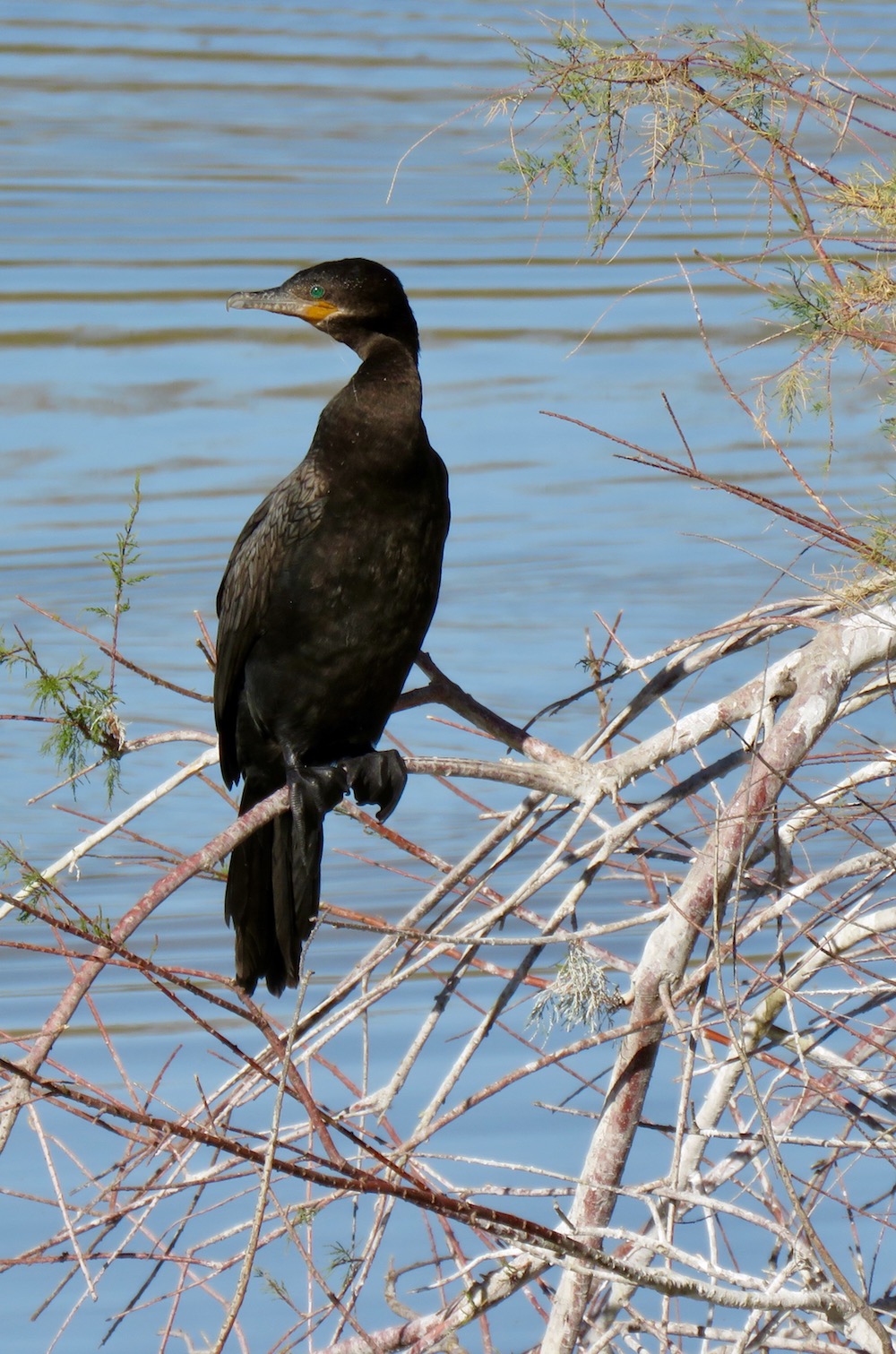 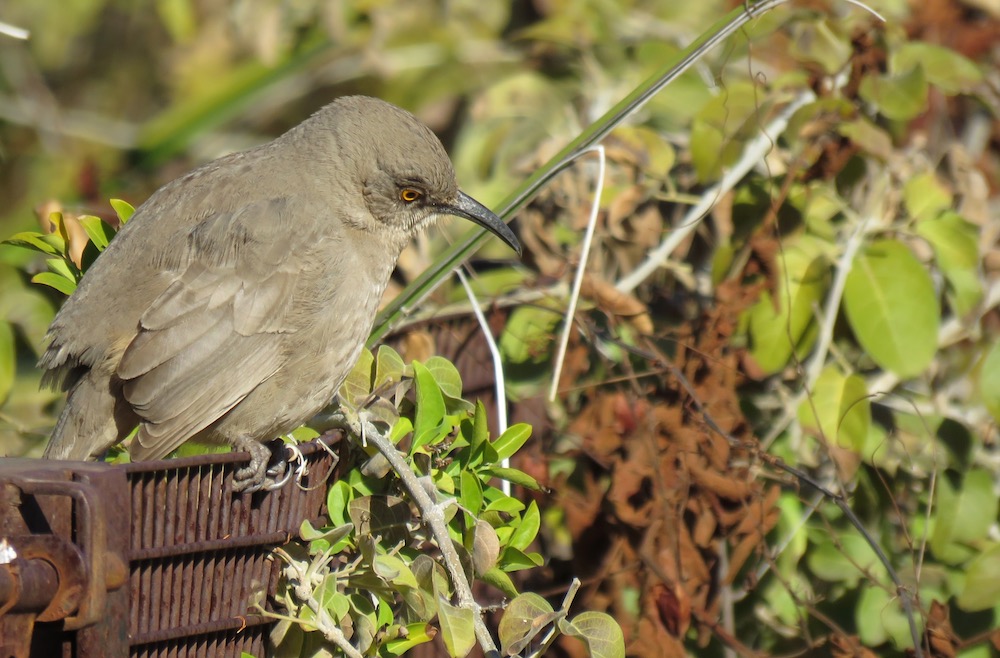 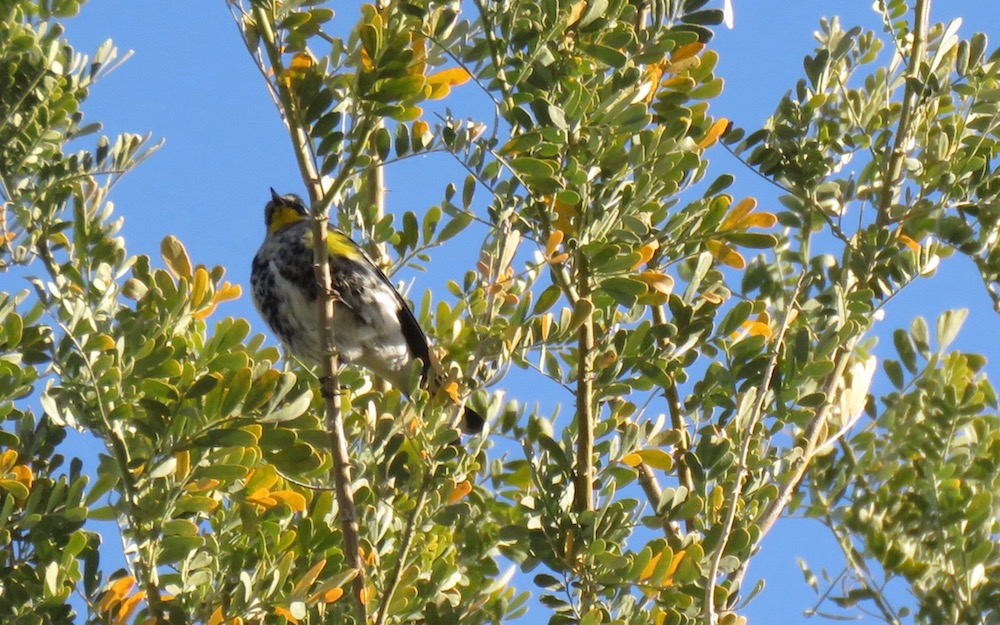 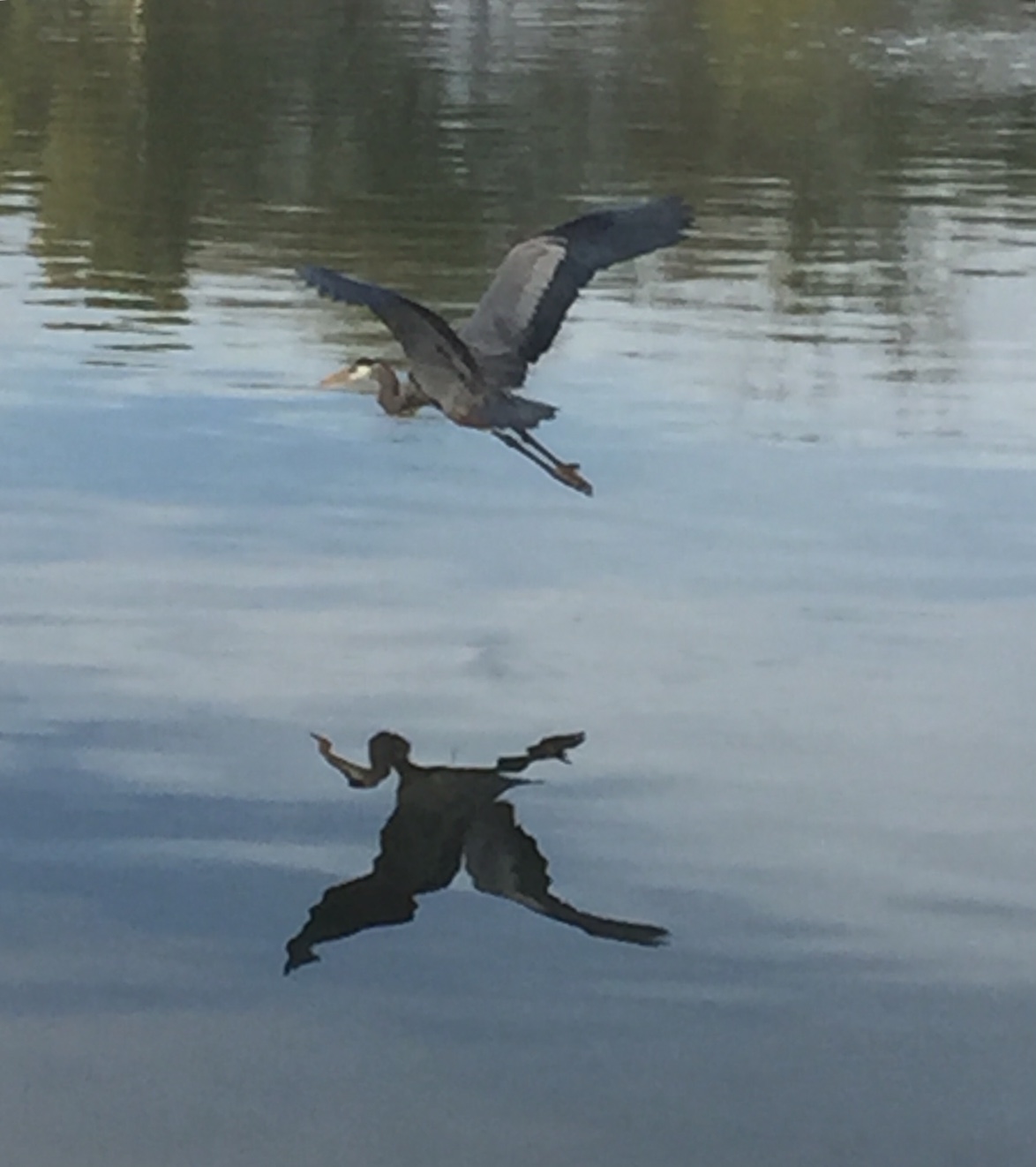 The landscape also speaks to me. I love the desert. I love the flatness spiked by saguaro cacti and terra cotta mountains. I love the smell of the air, the flat roofs, the shiny cars, and the ice-free sidewalks. In fact, the only thing I stepped gingerly around was a lovely little snail.

In the middle of a harsh winter, it is phenomenally cheering to be in the presence of living things like flowers and grass, and the huge variety of bird life. This place is surely a cure for seasonal effective disorder, or at least, a temporary break. I’m not sure that I suffer from SAD exactly, but the daily anxiety of walking on slippery surfaces and driving in snow storms is mentally and physically exhausting. And, it was so nice to say goodbye to the layers of heavy clothing and micro-spiked boots for a week.

We did lots of things, especially walking. One warm day we took Stella out for a hike to the Gilbert Water Ranch, which was extremely nice. A flat trek, with lots of dust, gravel trails (hence the dust), egrets, bunches of tiny scurrying bunnies, and wading birds like the Black-Necked Stilt or as I called it, the Black-Stilted Neck. Stella had a blast running after the bunnies (on leash), and to her credit, my shoulder eventually popped back into its socket. 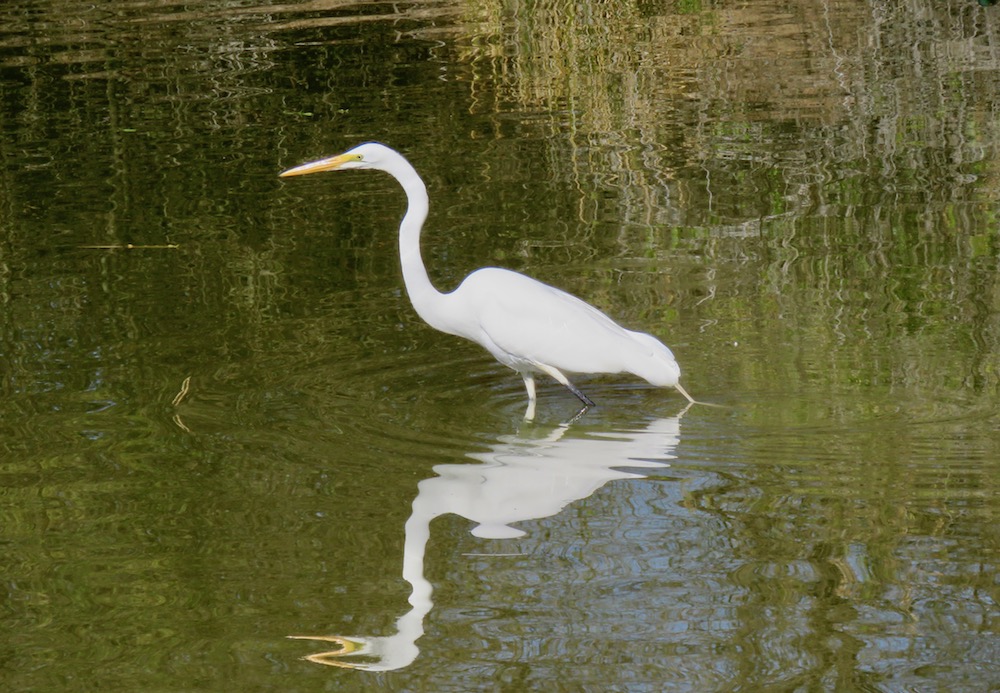 Upon reflection, I have no egrets 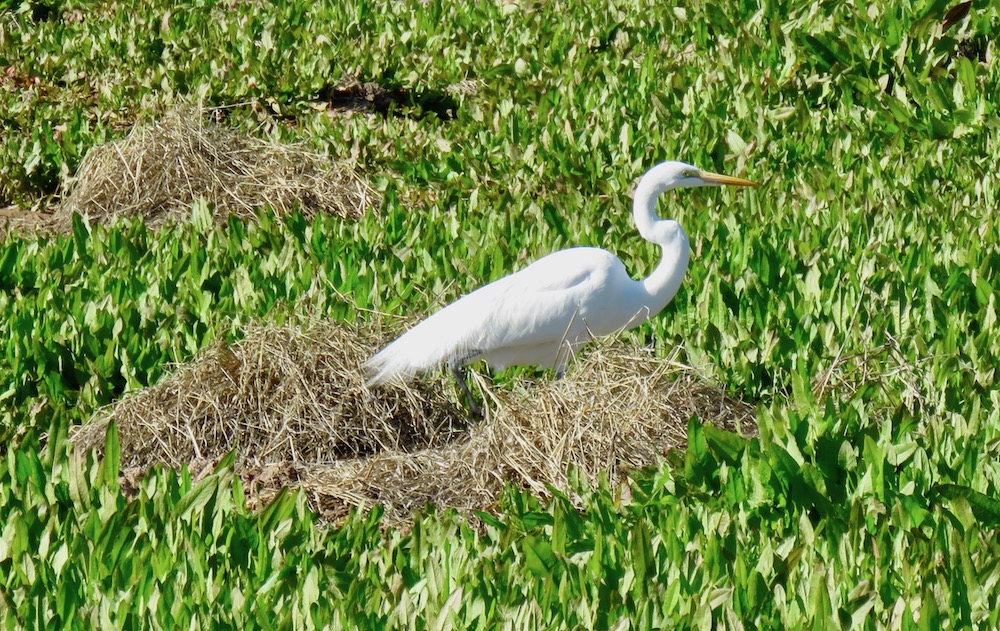 I really enjoyed the Queen Creek Olive Mill, which Joanne, Sharon and I visited on the Wednesday. I had bruschetta sampler plate, and it was outstanding. And then we all loved the boutique store, with olive oils and balsamic vinegars made on site. I bought a few things. Maybe a lot of things.

I also loved the Heard Museum in Phoenix, which is dedicated to the American Indian. We went there on my last full day, which was raining, and I fell in love with the Hopi Katsina dolls, of which they have hundreds. All very weird. When we got home, Sharon and I sat in the hot tub for half an hour in the rain. It was surprisingly pleasant. 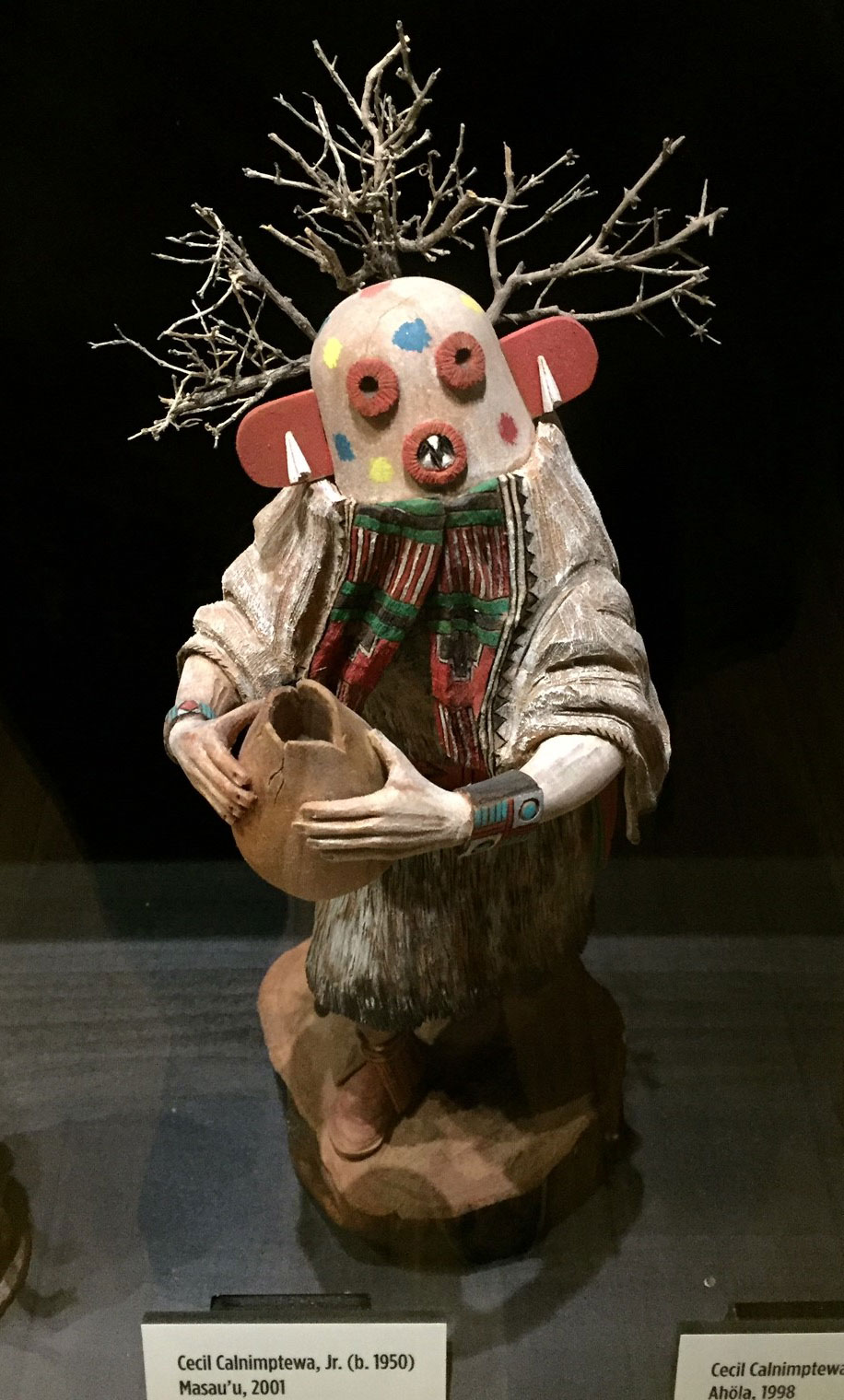 And of course, the Desert Botanical Garden – which we visited twice. On Sunday night, we all went to see their Electric Desert exhibit, which is exactly as it sounds. The whole place was lit up like a disco, only pricklier. It was beautiful, kind of like being underwater at a coral reef. Even the mountain had light images undulating across its surface. Whoever runs this place is endlessly creative with their annual feature exhibits. One note, I was absolutely frozen, which I know sounds weird considering it was about 11C, but I was not dressed for a desert night in February. Long pants would have helped, and the sandals were also a mistake. I wasn’t going to die from the cold, however, and that’s the difference. 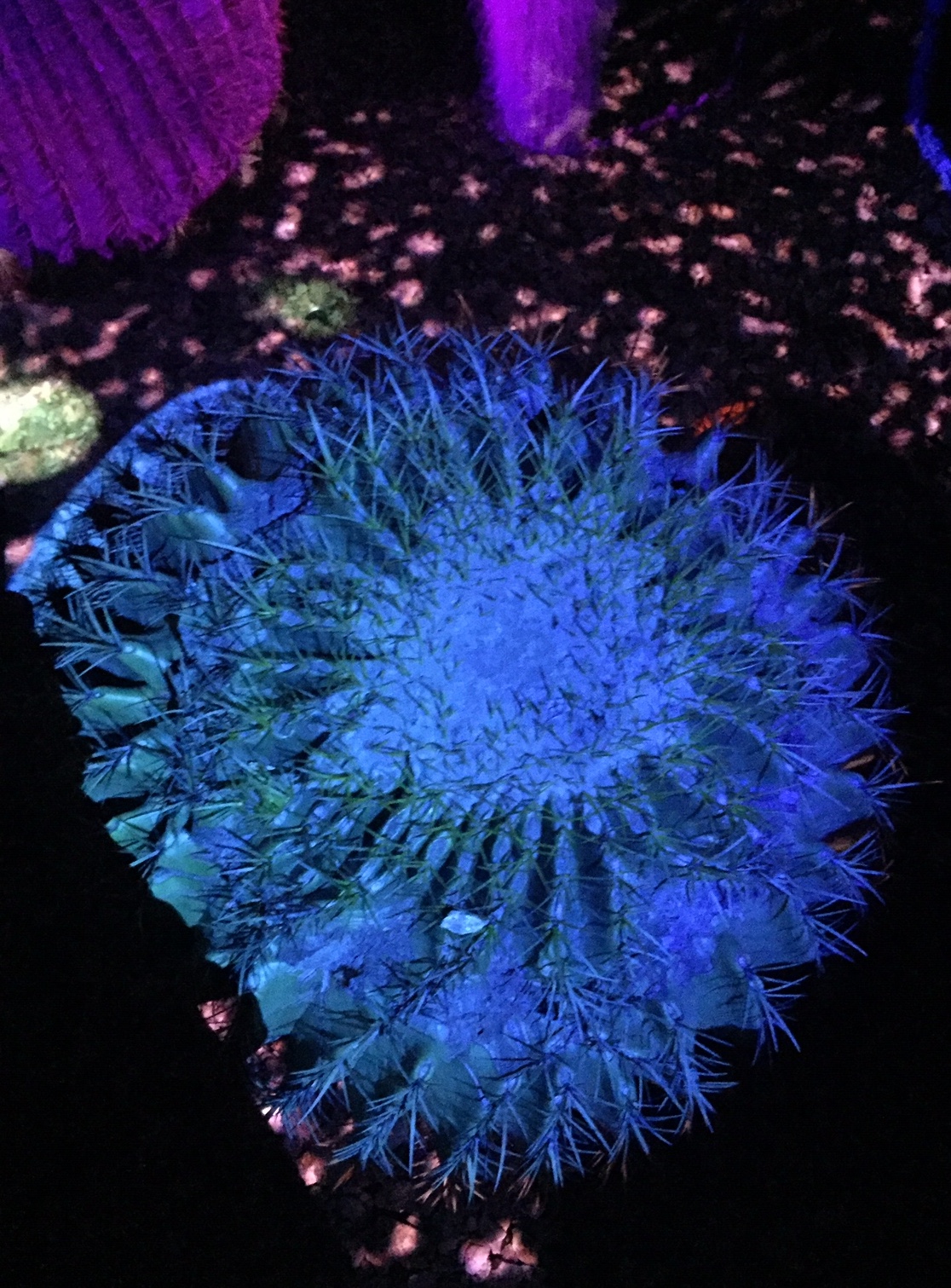 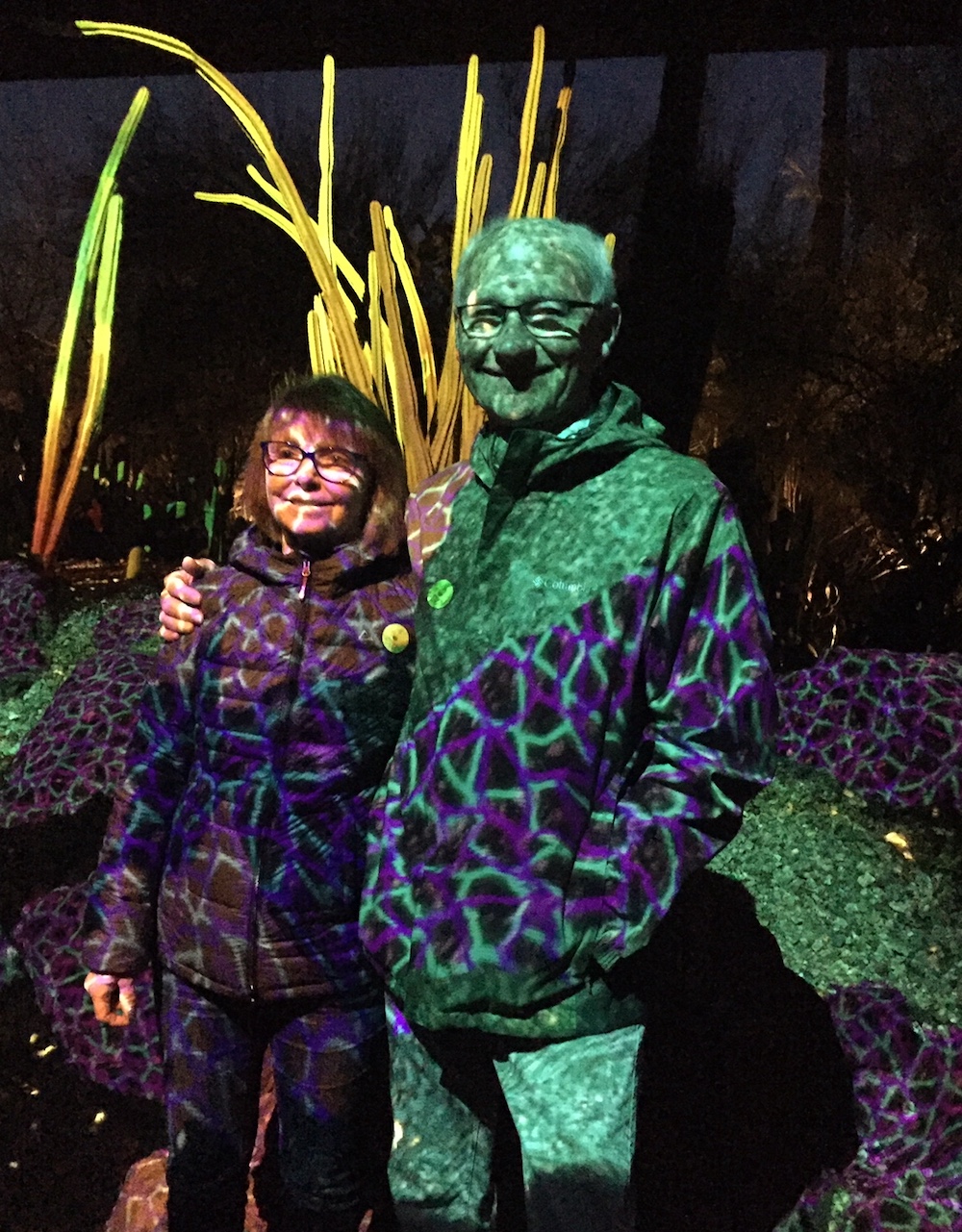 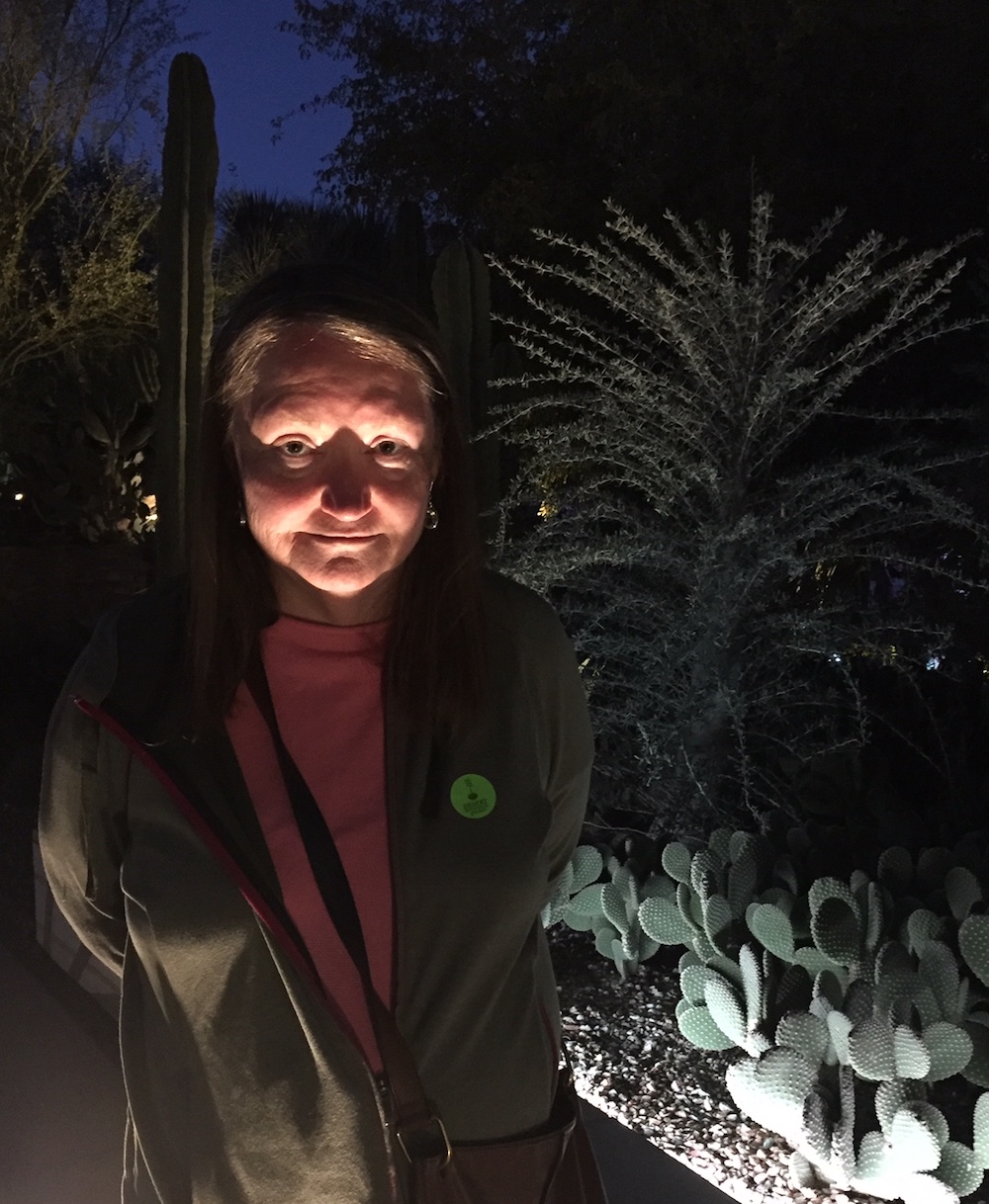 The next morning, Sharon, Larry and I were back at the garden with the birders. Saw some cool birds, some of which I was able to capture on my camera, others not so much.

The Boyce Thompson Arboretum was also a treat. I thought I had been there with Dad and Shirley way back in the 90s, but it must have been some other arboretum (or Are-borea-torium, as my dad pronounced it) because it wasn’t familiar at all. Lots of little winding trails and far more lush than the botanical garden. It was hot outside too, which was awesome. Stella enjoyed it as well, although whoever was holding her leash had to make sure she didn’t walk into cacti. As Joanne pointed out, some of the locations looked like the battle scene between Kirk and the Gorn on Star Trek. No gorns, but we did see turtles laying on a rock in the sun. That’s a first. We had a picnic lunch in the tree grove. Can’t remember what they were, but they were huge. And apparently, full of cardinals. 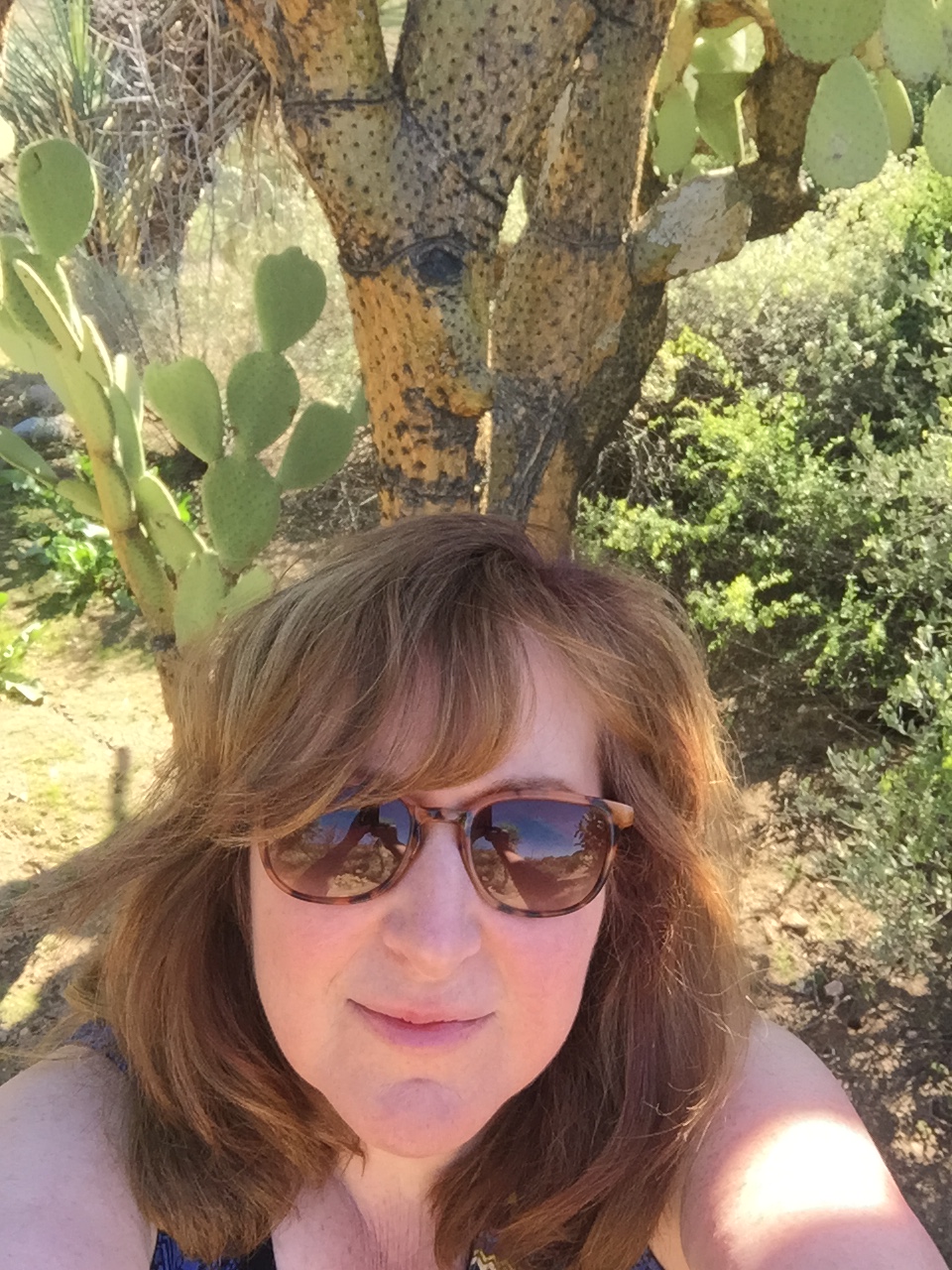 Me at Boyce Arboretum

Happy Valentine’s to you too, succulent! 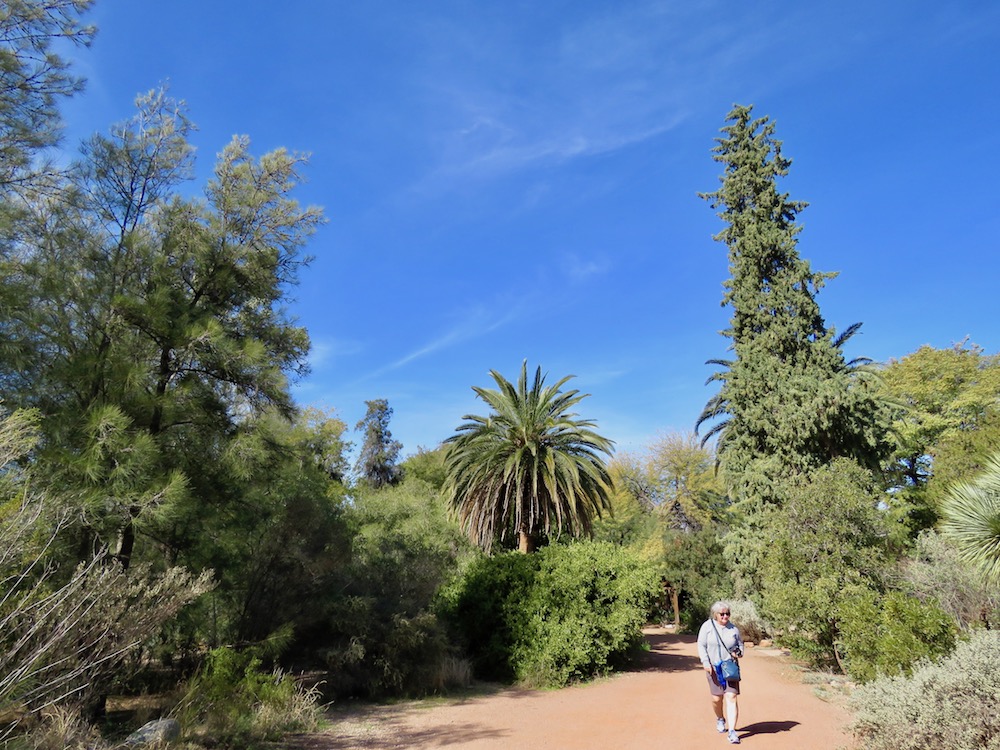 Throughout the trip, I felt enormous gratitude toward for my sister and brother-in-law for kindly purchasing this condo in Scottsdale in 2013, and for opening its doors to family and friends. And especially, for the opportunity to spend some time with my sisters in total relaxation. Sharon had to do all the driving since their car is a standard, but I think…I hope…she was relaxed. Stella certainly was relaxed, when she wasn’t on high alert in the car, or hyper-focused on her favourite blue ball, which, by the way, I accidentally threw over a wall and lost. My sporting abilities continue to amaze. 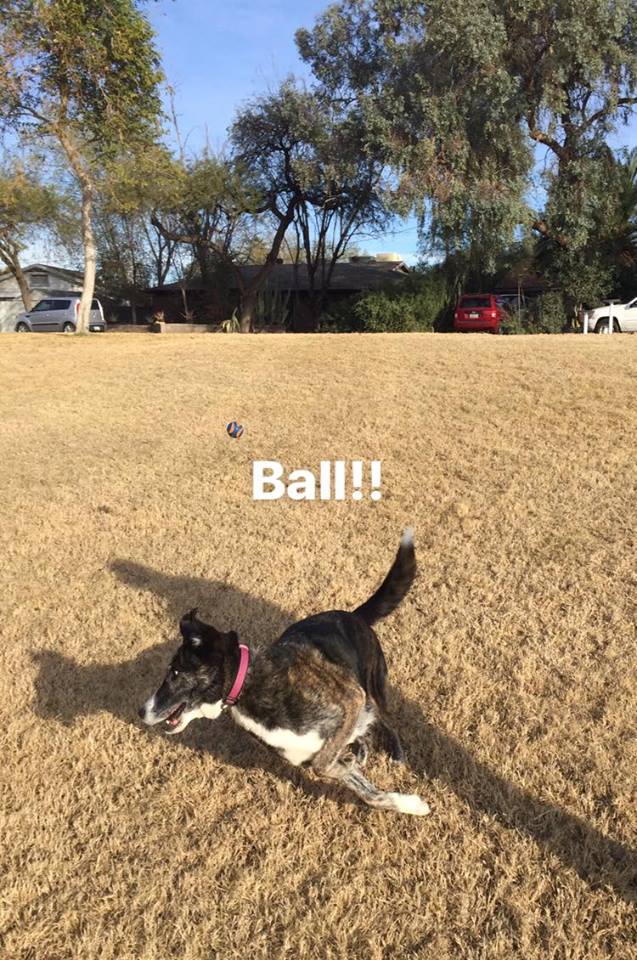 I was sad to go, and if I had been a better planner, I would have stayed for another couple of days. Once the plane was in the air for about 20 minutes, the landscape became white, and we landed in Edmonton in a white-out snow storm.

As the Westjet spokesman said, “As you step out the door of this plane, please remember, you asked us to fly you here.”

Nevertheless, it was a great time. Thanks Sharon and Vic and Joanne and Steve and Cathy and Larry and Stella!! 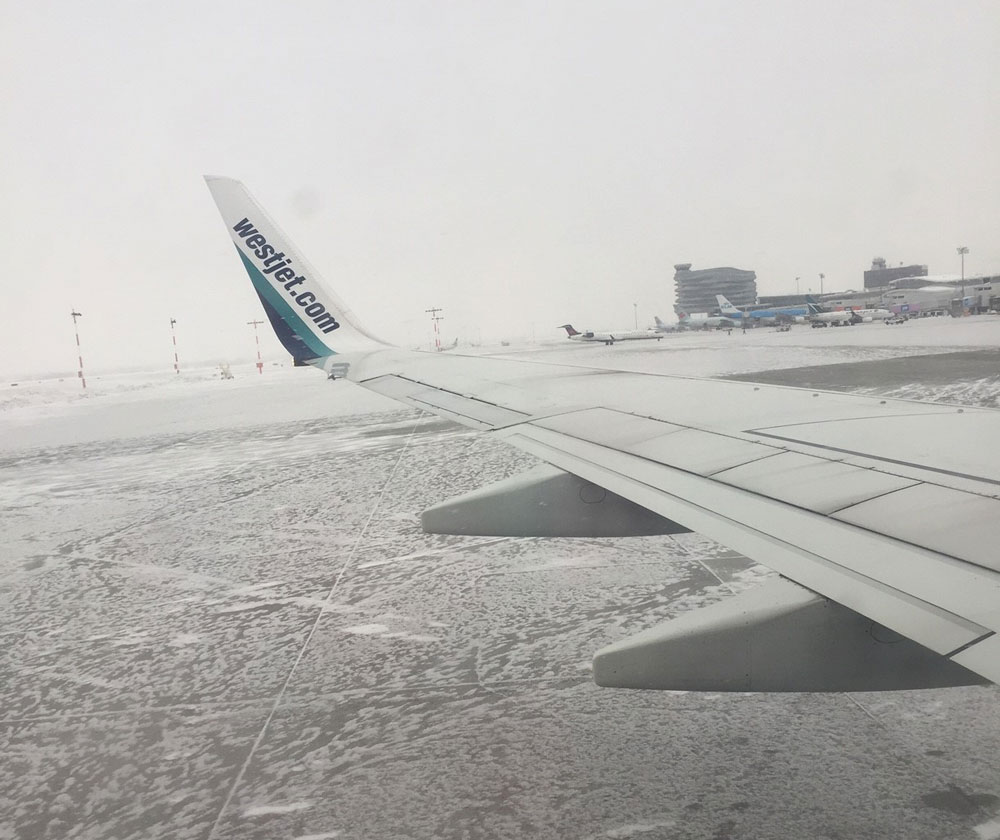