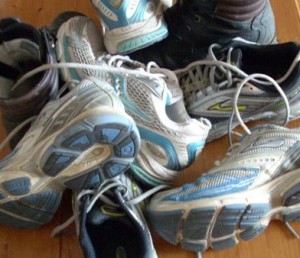 Hello, my name is Donna McKinnon, and this is a blog about walking, and specifically walking in Edmonton’s beautiful river valley trail system.

Just for the record, I suck at every sport I’ve ever tried. I have neither the interest, nor the capability to move my body in ways that will most certainly result in my death, disfigurement or more likely, my humiliation. However, I’m a great walker. Not to brag, but I’ve been doing it since I was a year old, and I believe I’ve now fully mastered the skill.

In February 1994, I started walking  home from work, which at that time was an independent bookstore located downtown. It took two bus rides and 25 minutes to get from door to door, even though I lived just across the river in a neighbourhood that straddles Millcreek and Strathcona. I started walking for the usual reasons: a healthier heart and a little less squishiness, but in addition to this, I longed for a more relaxed commute and a way to avoid the drunks and mumbling crazies who at bus stops (and elsewhere), seemed to gravitate toward me.

For these reasons, I started walking, but I continued walking for another 16 years for things I did not foresee or expect to receive. Initially, my route crossed over the High Level Bridge and then straight down Saskatchewan Drive. It took 55 minutes and it was a slog, even though there were no hills or stairs. In six weeks, I had that down to 35 minutes. And then in April of 1994, the City announced it was closing the High Level Bridge for repairs for an entire year. My choice was to reacquaint myself with my compadres at the bus stop, or find a way home through the river valley. I chose the latter, and that’s when my life changed.