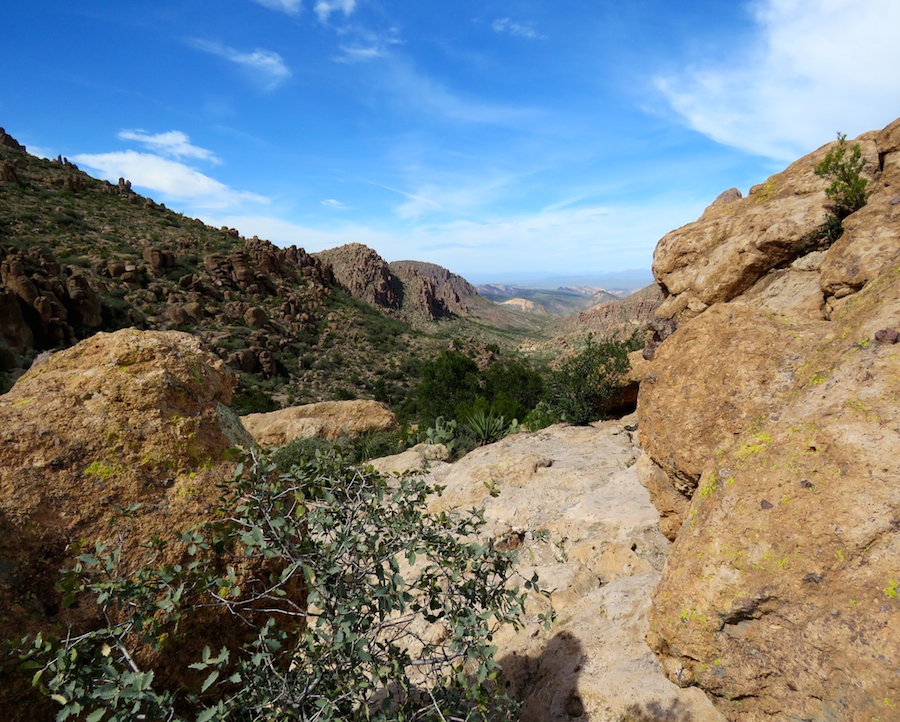 Too late. I have already complained, and I am about to explain.

I spent four days in Scottsdale, from Thursday, February 16 to late Sunday. It was a wonderful. All of it. Even the parts I complained about and will now attempt to explain. It was a relief to leave, however briefly, a Maggie-less house. Nice also, to be under the sun (for two of the four days) and next to saguaro cacti, which always seem so human to me. And to see my sister Sharon, who has been on vacay for a month.

My cousin Cathy and her husband Larry were also down in Arizona, so it was a great family visit on top of a much-needed desert holiday. Shortly after arriving at the condo, Sharon and I took off to her home away from home, the Desert Botanical Garden. It’s a beautiful place. The breadth of plant life (mostly succulents) in Arizona in combination with the flat landscape and the afterthought mountains continue to amaze. It’s truly a gorgeous place and I’m always happy to be walking among the pricklies, even if now some of those pricklies are actual pricks (of the Trump variety). 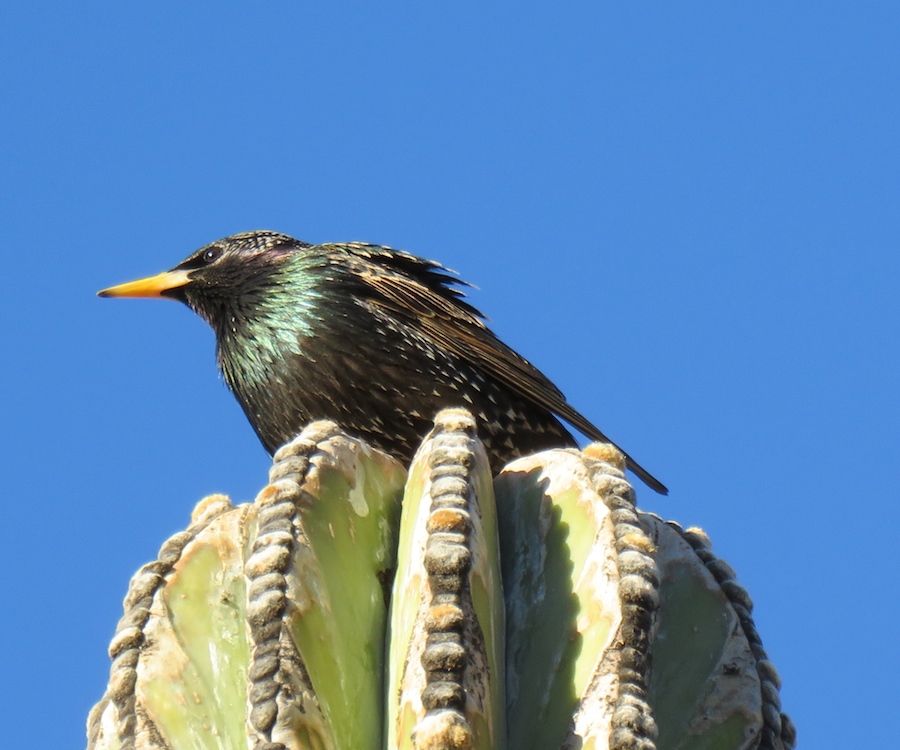 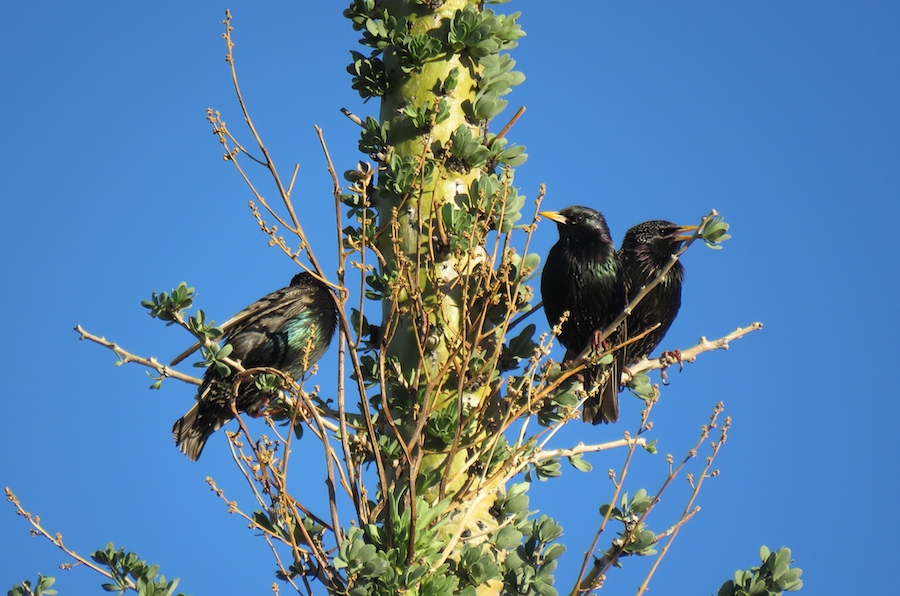 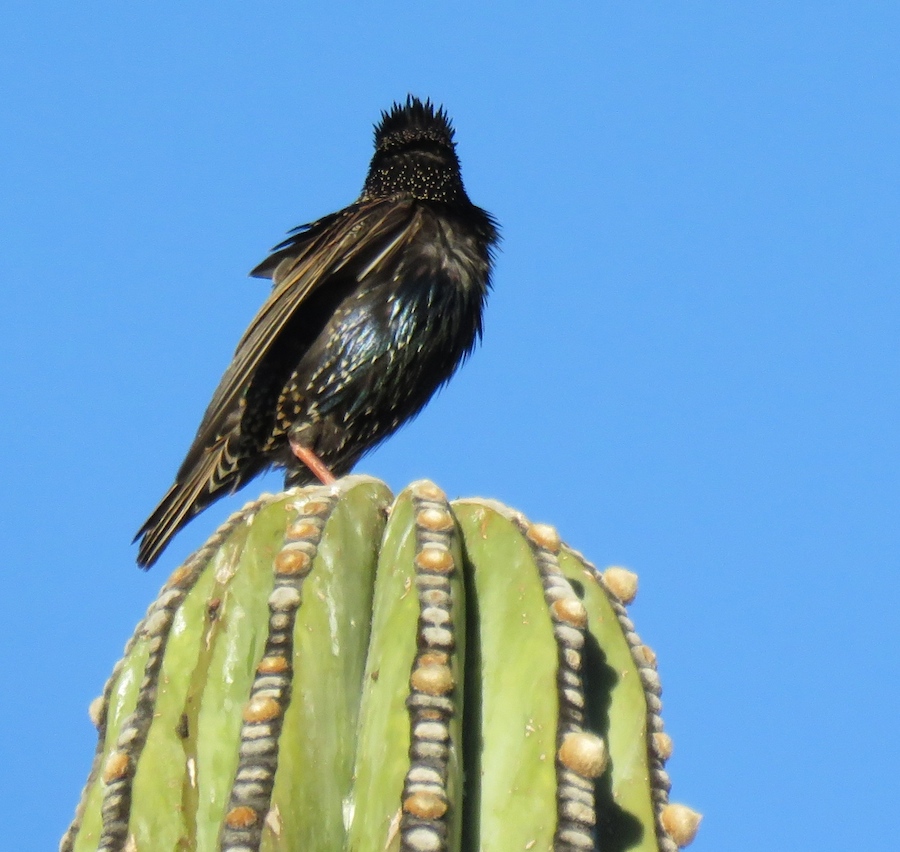 Turns out, on previous visits I had totally missed entire sections of the garden. In my defense, it’s huge, with lots of twists and turns and a great gift shop. Many photo opportunities, especially birds. Apparently there are also snakes, lizards and roadrunners, but I have yet to see any of those. On this trip, I saw mostly starlings, which are a spotty bird with a lovely green sheen. They enjoy sitting on the tops of cacti. Either they have good padding or they are very, very dumb. And, I would imagine, sore. Also, lots of quail and pigeons, although down here they call them doves. 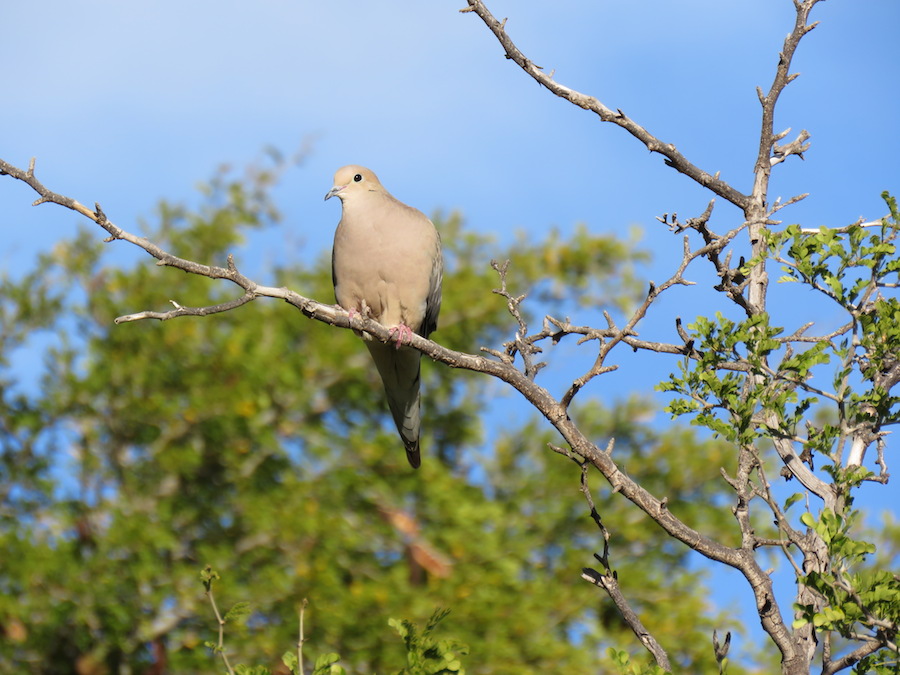 We did all the usual stuff. Walked to Old Town. Ate Mexican. Drank latte’s at the Coffee Bean. I had a particularly nice phone conversation with Tom while sitting on a lounge by the pool as dusk approached. Very balmy. Very relaxing.

One of my goals for this trip was to do some hiking. Sharon and Vic have hiked all around the Phoenix area, but I have not. Sharon picked her favourite hike in the Superstition mountains, about half an hour outside of Scottsdale. As we approached the trail, it looked harmless enough. The surrounding landscape was beautiful. Mostly flat right up to the mountain range, with lots of cacti. A scene plucked out of a western movie set. Within 15 minutes, however, things got rocky. Really rocky. It turns out this trail is mostly loose rock and boulders, which apparently is called a scramble. By definition, if you need your hands to make headway up a steep gradient, you’re scrambling. I would add, if you need your hands and your ass to make headway up (or down) a steep gradient, then you’ve made a terrible mistake. I have never hiked up a scramble before. My acquaintance with the word had, up to that point, involved eggs. By the end of it, my brain, and parts of my body, were well and truly scrambled. I was a full English breakfast. 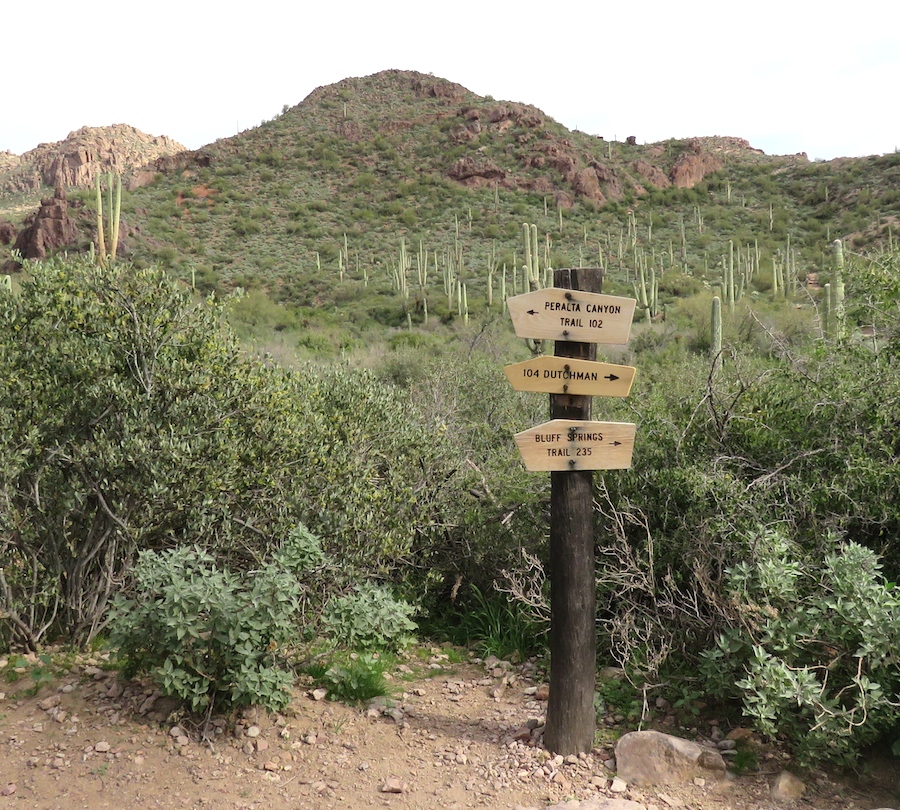 The trail of tears 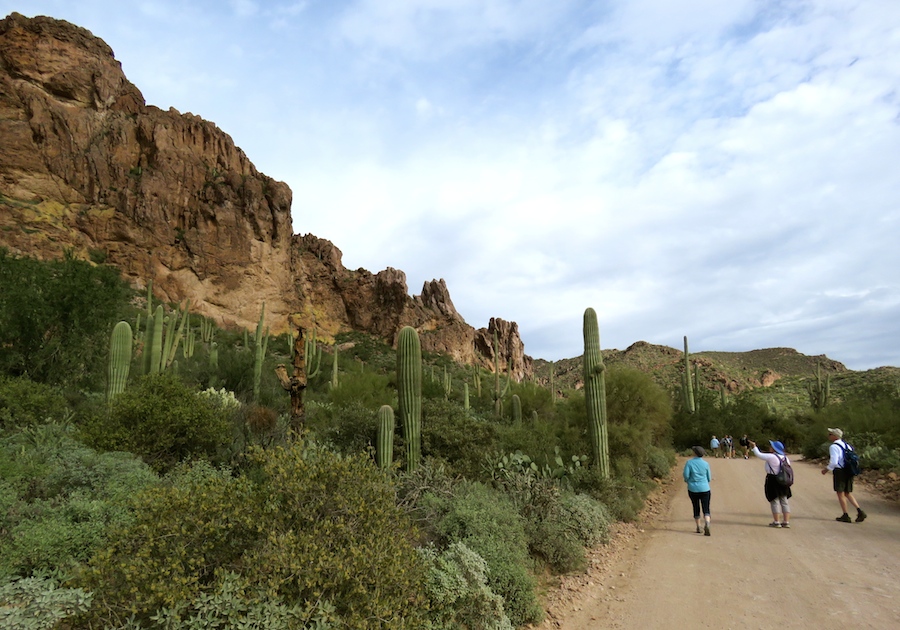 Part of the superstition mountain range

For most of the walk, my eyes were glued to the trail, because I was sure if I broke concentration, I was going to fall. Some of the passes were quite narrow, with uneven, rocky footing. It wasn’t the physical exertion of climbing to 5,000 ft so much as the psychological trauma of anticipating my immediate demise and/or blood spurting and/or bone breaking injury, or the injuries of others. I’m not usually such a whiny little bitch, but I was spooked. When I did stop, the scenery was magnificent! Every time I looked up the peaks of the mountains to our left and right were closer. We had started the walk under cloudy skies, but as we ascended, the skies cleared and the contrast between the red rocks and the blue sky was stunning.

Cathy and Larry, Weaver’s Needle behind 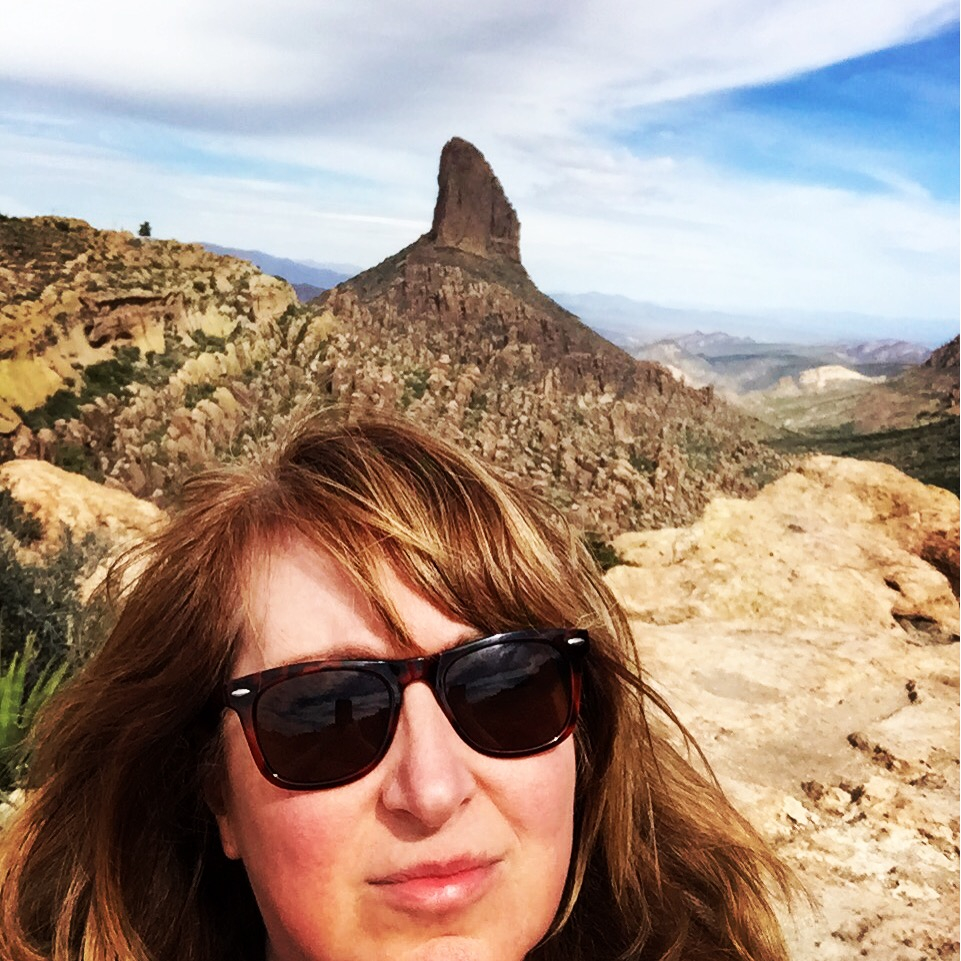 Me, apparently alive, in front of Weaver’s Needle

I think my fear has something to do with my lack of fitness. I used to be very fit, and I think there is a confidence that goes with a well-performing body. Also a lighter body. Five hours of hiking would tire anyone, but the mental exhaustion was kind of a surprise. I spent most of the hike wondering if my body would keep me upright. (It is known to be untrustworthy in that regard.) I started chanting ‘the earth will hold me up, the earth will hold me up,” and somehow, it did. I tripped a few times but didn’t face plant. I’m glad I made it, but I’m more than a little surprised and yeah, maybe a little ashamed that I complained throughout. That’s not me. At least not when I’m in nature. It’s supposed to my element. Walking is my thing. Who is this Donna?? 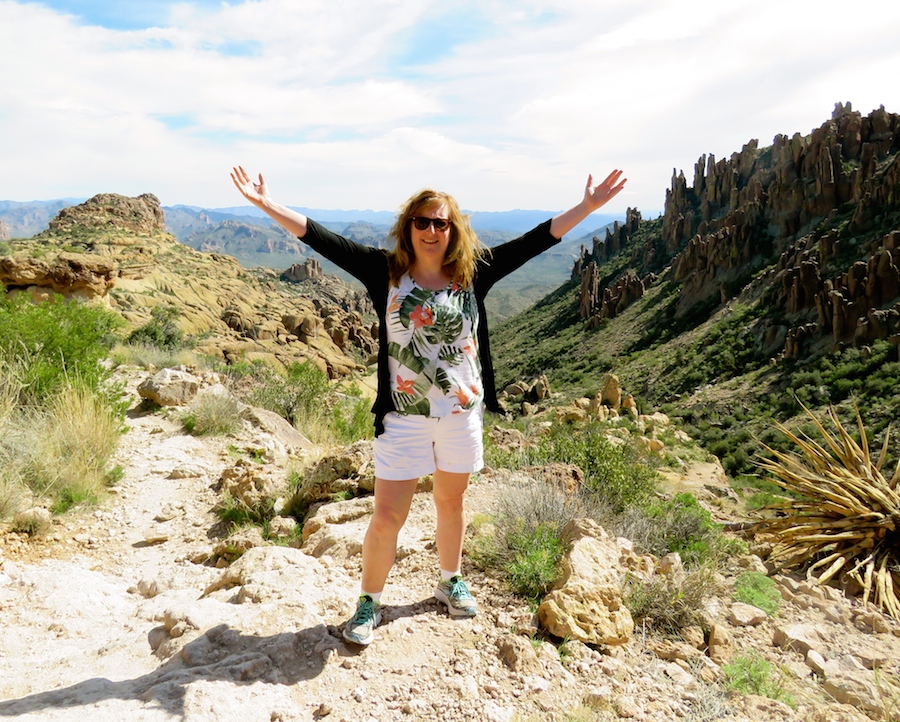 Behold, the splendor of nature in all its bouldery magnificence!

It’s OK not to like scrambles. If the trail had been clearer and the boulders less homicidal, I think it would have been different. But even at peak fitness, I’m not an agile person. I don’t look for ways to go up or down hills on my ass, and I don’t like going full old-lady down a trail, grabbing every branch for dear life, including the occasional cactus. I was probably being overly-cautious, and sometimes that can be as dangerous as being reckless (like the douche we passed running up the hill, and then down). Whatever I was doing with my body, and certainly with my mouth, it made me look like an asshole, a million miles from where I used to be just a few years ago. I don’t like being that afraid, and I also felt bad that I made my sister feel like she had taken me on an un-fun hike. It was fun, in hindsight, and the scenery was (probably) worth it. My cousins who are more than ten years older than me had no problem, and they loved it! Sharon, who is managing a health crisis rather admirably, had no problem. We were all tired, but I was the only one complaining. Nice. 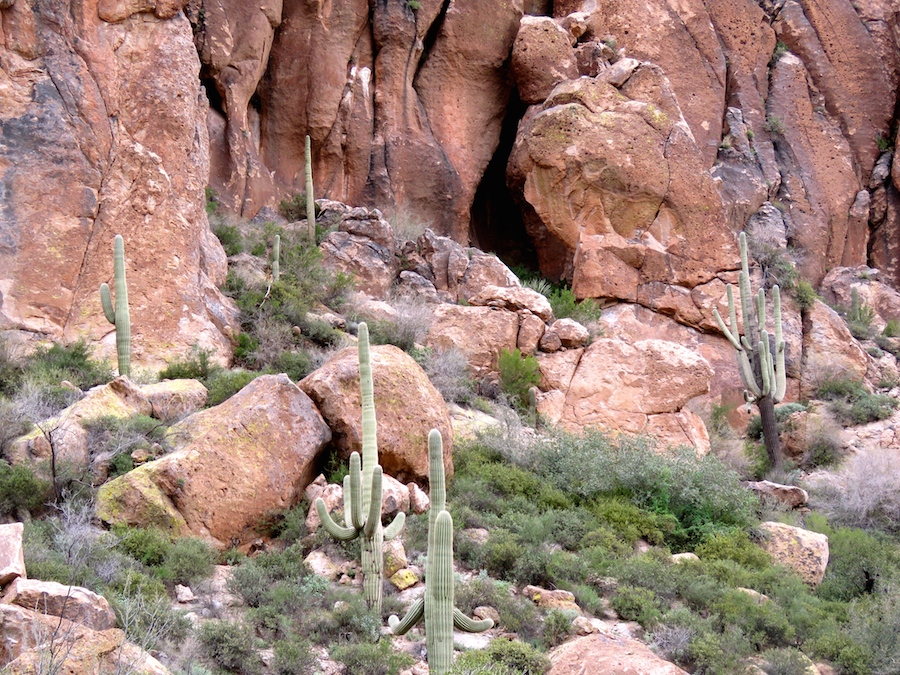 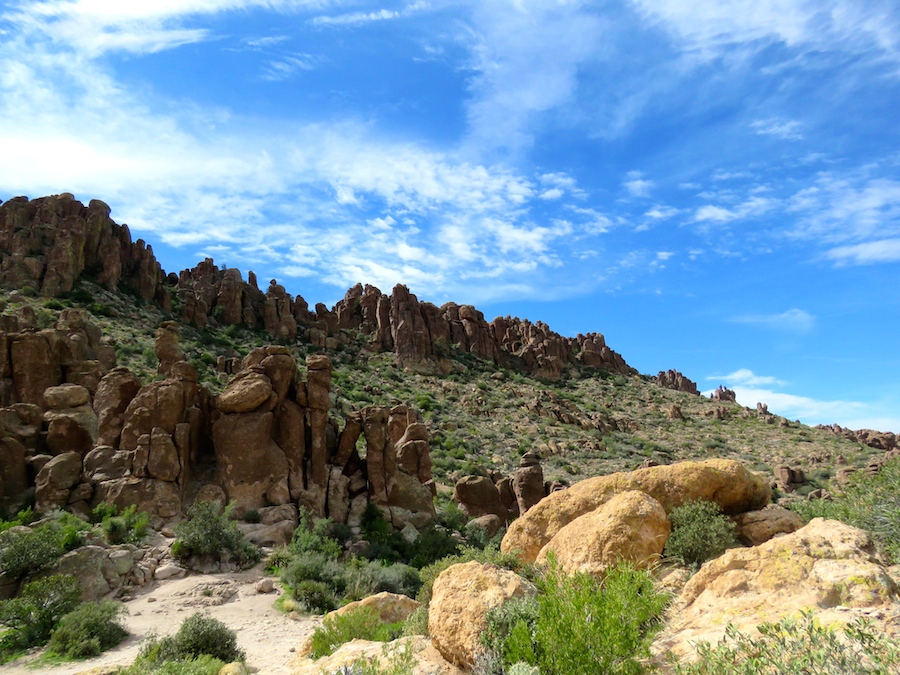 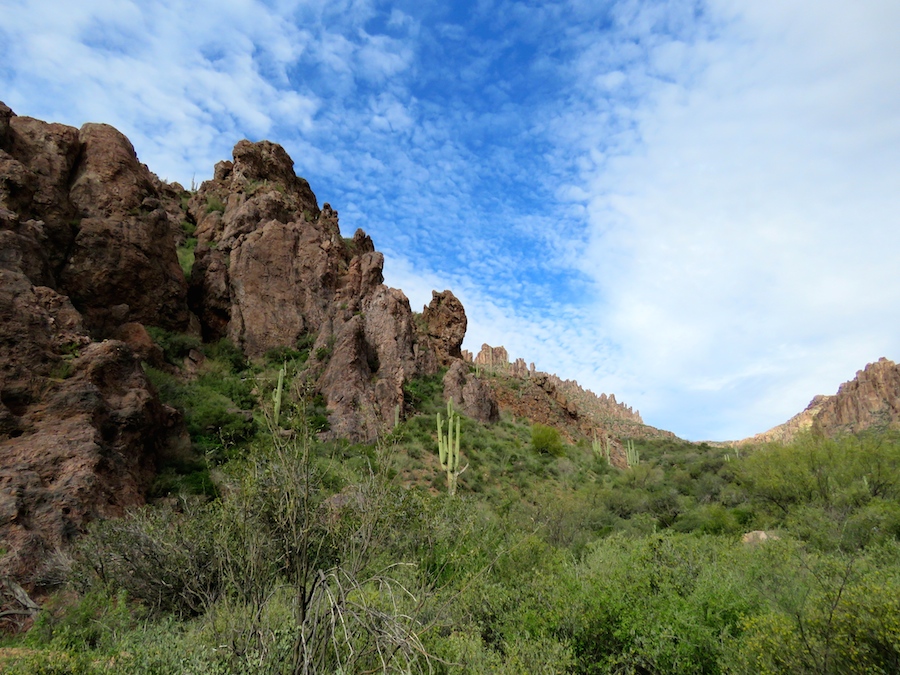 After we arrived back in the ‘hood, with great difficulty I got out of the car and got myself a latte, and then we all spent the next hour exchanging skins cells in the hot tub. That helped. I wasn’t too stiff the next day, but still felt bad about the whole thing. My inability to deal with the scramble, and my inability to keep my mouth shut about it felt at odds with how I perceive myself. On the other hand, maybe I am a whiny little bitch. I am certainly out of shape.

The rest of the vacation featured few dangers, and very little complaining. Who could complain in that landscape? It did rain on the Saturday, and parts of Sunday, but along with the ease that comes with warm summery temperatures, I also miss rain in winter. We don’t get a lot of it in drought-prone Edmonton and the sound and smell is always so calming. It was wonderful falling asleep to the sound of rain on Saturday night. We also enjoyed walking around the partially flooded golf course on Sunday, watching the cormorants air-dry their wings and just being immersed in green. We followed that up with a great dinner at The Blind Pig, one of Sharon and Vic’s favourites, which had a live country band. Lively atmosphere and the salsa was incredible. And then a direct flight home.

My takeaway? Winter holidays are great, even if they are short. Also, more exercise, more walking and more nature. Fewer boulders. 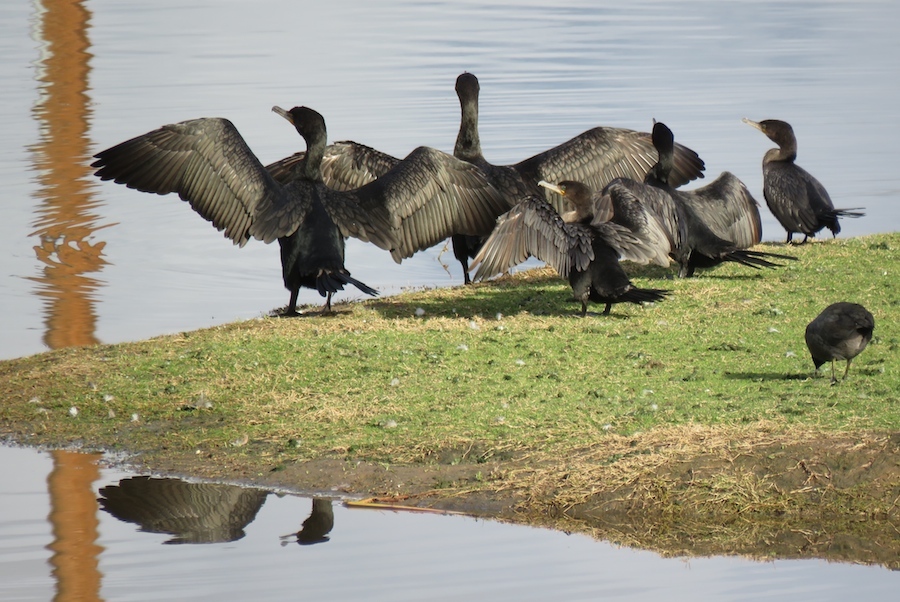 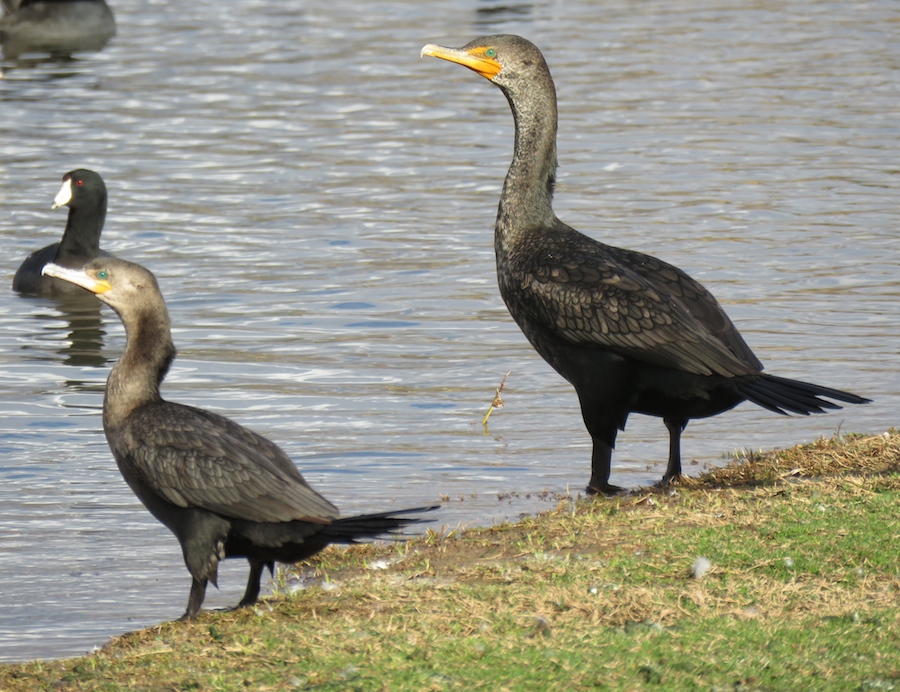 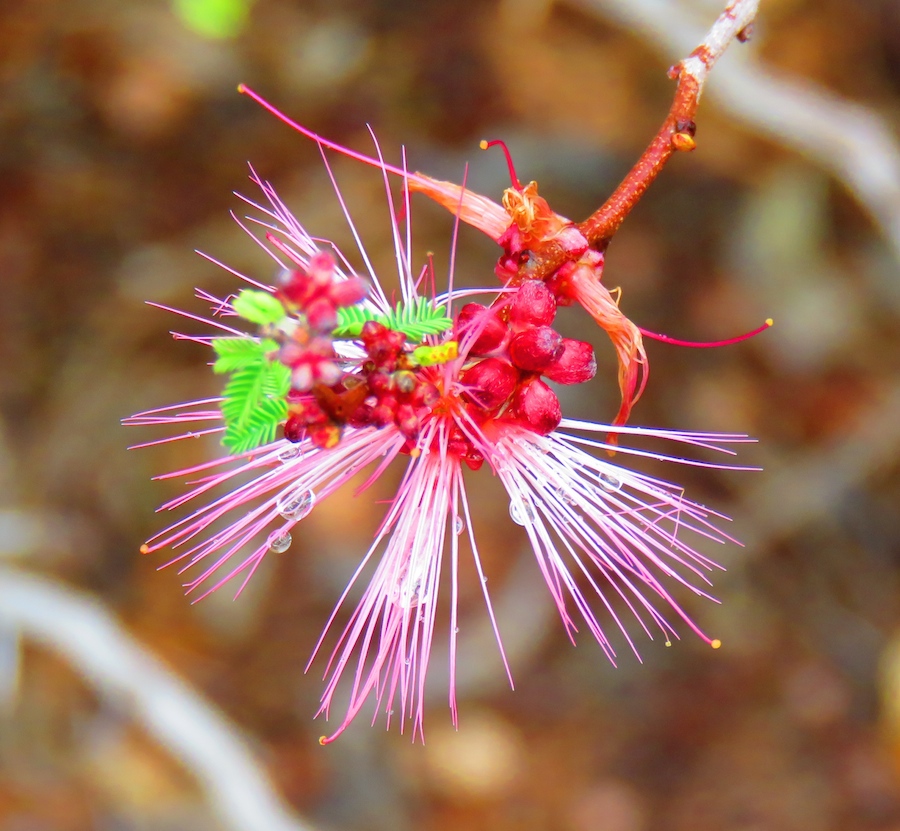 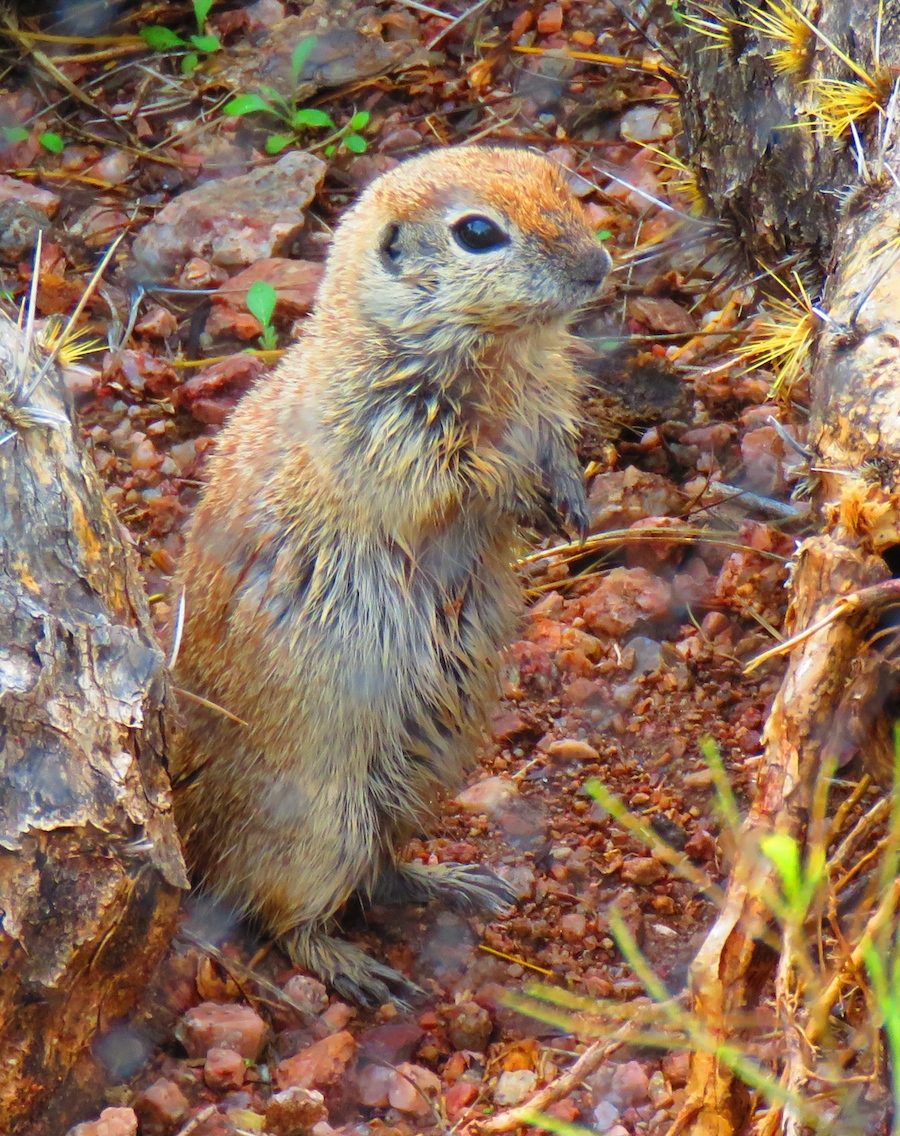 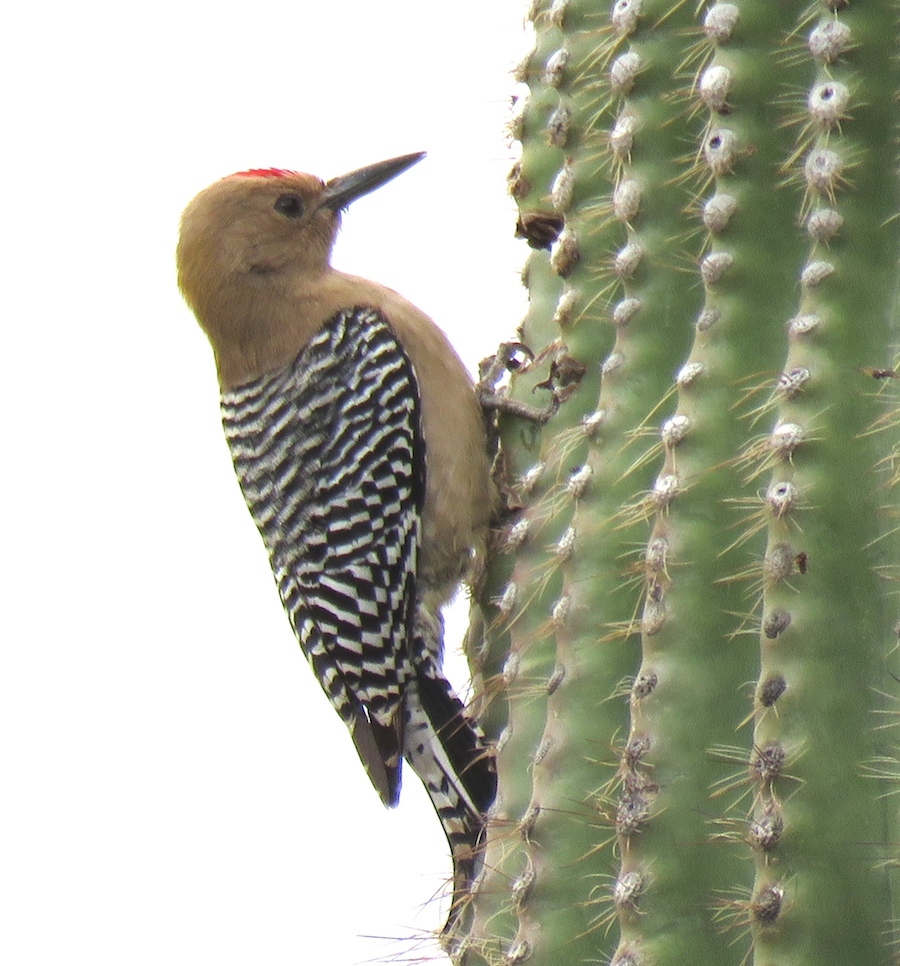