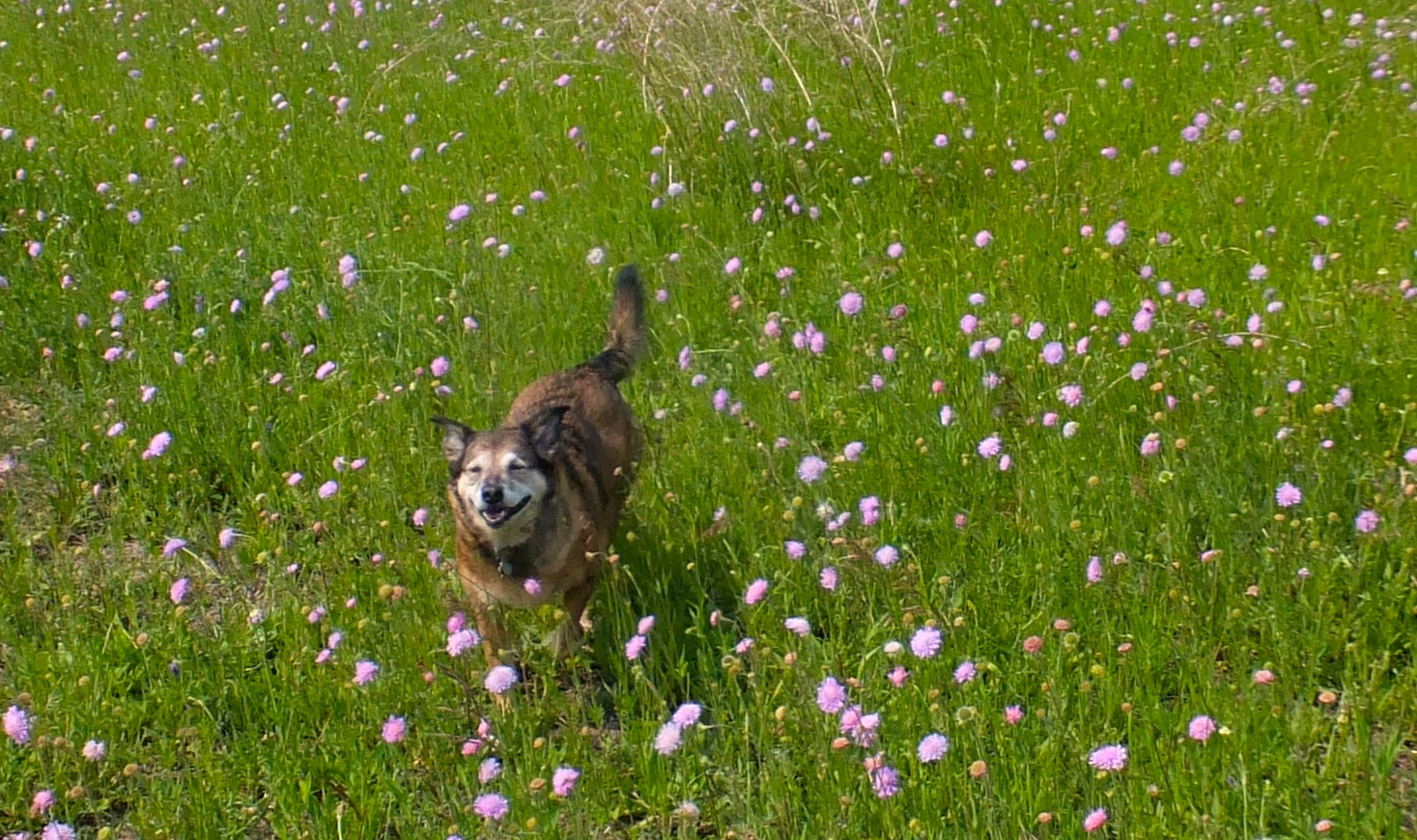 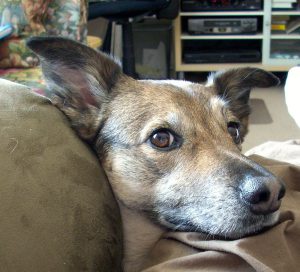 Hello want to go for a walk?

Maggie wasn’t even my dog.

At the end of summer in 2011, I moved into my sister’s basement for what I thought would be about a year while they were on sabbatical – ostensibly to help with my two nieces, who were 18 and 20 at the time, and their dog Maggie. I have always been a dog person and I loved Maggie. I had been their designated dog sitter for years, and thankfully, my sister and brother-in-law traveled a lot. Every post-Christmas ski trip. Every summer holiday. A weekend here and there.

Maggie and I, in the woods.

She was a champion walker and my best dog pal. My snack buddy. My frequent bed partner. My mood lifter. On Tuesday, she passed away. Fourteen and a half years old. An old dog, yes, and very arthritic, but up until her last week, happy to frolic in the park behind the house; eager to eat rabbit shit and smell every pee hole in the snow. To the very end, a dedicated blanket messer-upper and family room ‘tapper’ (she liked to go around the room and tap the surface of things with her paw). The best part of my day was when I was walked up the street after work and my sister would open the door and Maggie would come running down the driveway. Always joyful. She was a joyful dog. 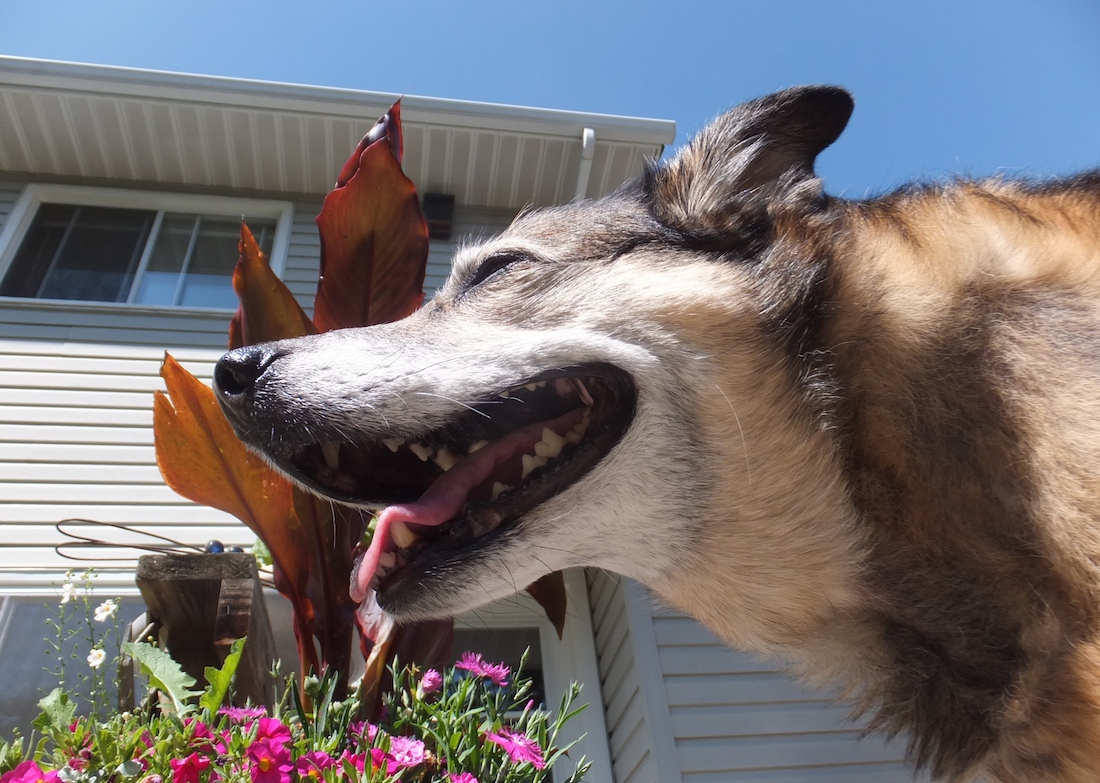 She had been in decline for a couple of years. Early in her life, she was full of energy, or as Sharon described it, full of the hybrid vigour that comes with being a mutt. I remember once, when she was still quite young, I was dog sitting during a couple of weeks of incredibly hot and humid weather. I got up at 5:00 to walk her for an hour in the cool of the ravine, and then left her in the house all day while I went to work, and then walked her again for another hour or more later in the evening. She needed it. I’m not sure I did (especially at 5:00 in the morning). We both loved to go for walks. We could walk for hours. 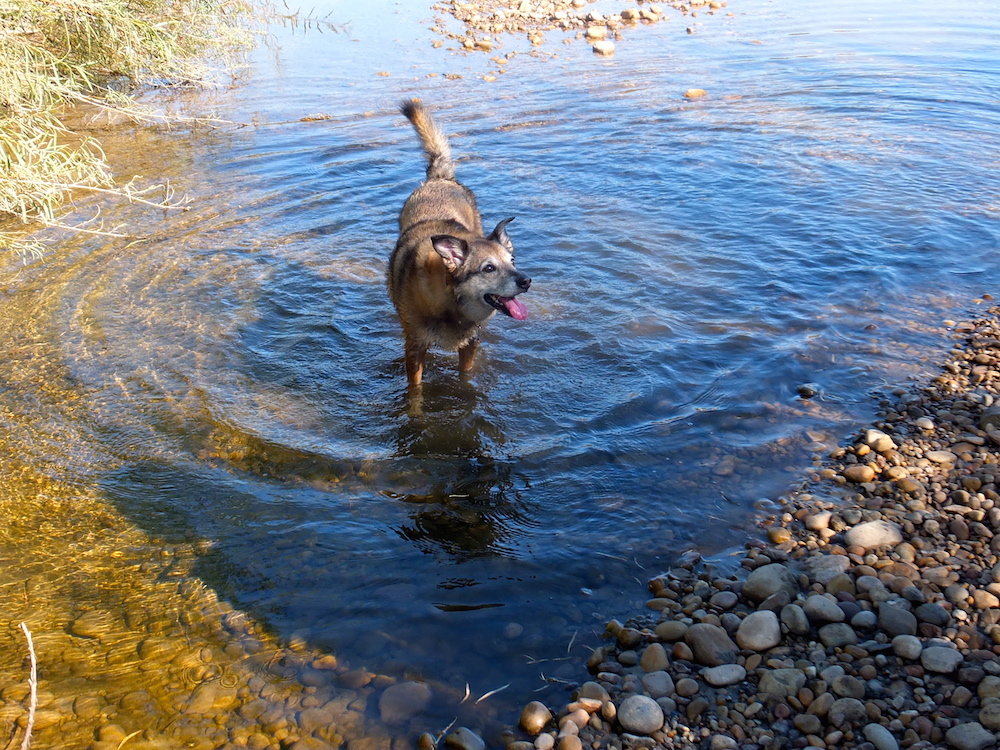 About three years ago, she began to hesitate, slowly at first. Sometimes she refused to go up a hill. Some days she would walk more slowly than usual. Sometimes she’d just stop. Our walks gradually became shorter, more destination oriented. We would drive her to Terwillegar off-leash because she loved the river, or the creek, or any pool or bog or puddle. She had a habit of sitting down in the water, no matter how dirty or shallow or icy. It always made us laugh, and I think she knew that. 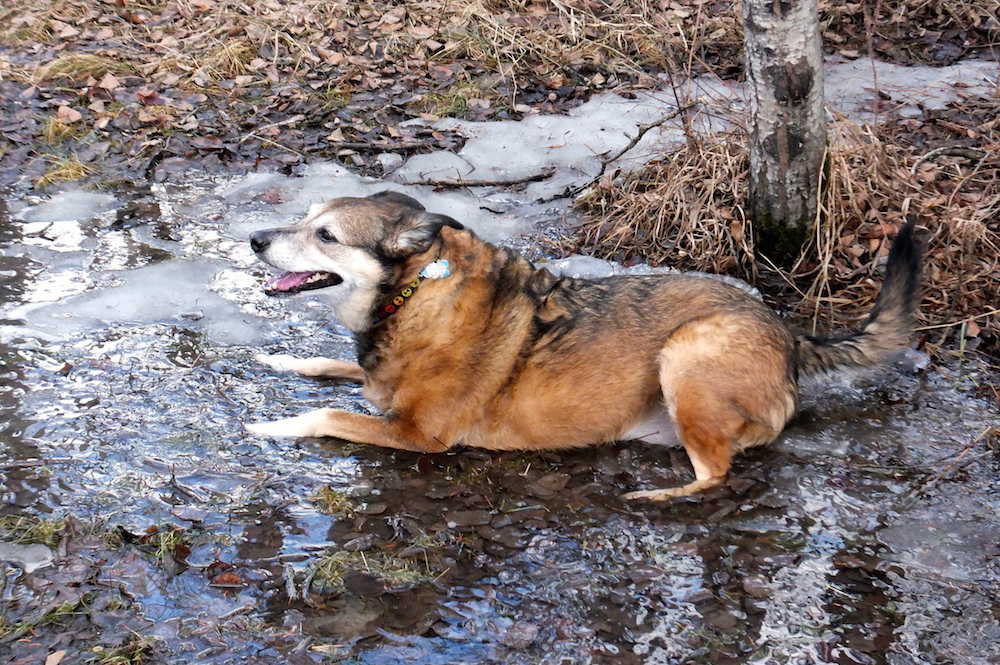 Any water will do

I had been a solo walker for many years. I was used to walking at a fast pace, with few or no stops. Walking with Maggie over the years, but especially these last five years, I learned to walk more slowly. To stop and listen and drink in the landscape while she nosed about in the bush. I even wrote a post once about her snout. Such an admirable snout. 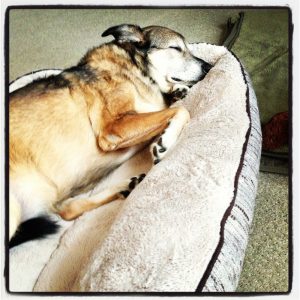 One of my favourite memories of Maggie did not involve walking but sitting on the stairs of the deck. She would sit beside me and I’d put my arm around her. She’d lean in a bit, her hot fur weight against me. I could smell her doggy scent, hear her light panting. Occasionally she’d look around and give me a quick lick on the face. I was truly present in those moments. Just sitting there, with her. We did that a lot. Not my dog but yet so deeply bonded. To be in the company of a dog, especially a dog like her, is really something.

In the last couple of years of her life, she was prescribed many medications: for her fading eyesight and her aging heart and her arthritis, creeping inexorably down her back and legs. Cubes of glucosamine, or as the kids called it, her medicinal jujubes. I was in charge (or at least, I took charge) of administering these concoctions. “Shooting” her and “pilling” her, multiple times a day. Making sure she ate something with her pills. Making sure her water bowl was full. Even now, five days since she’s been gone, I can’t stop looking over where her dish should be, anxious that she doesn’t have any water. 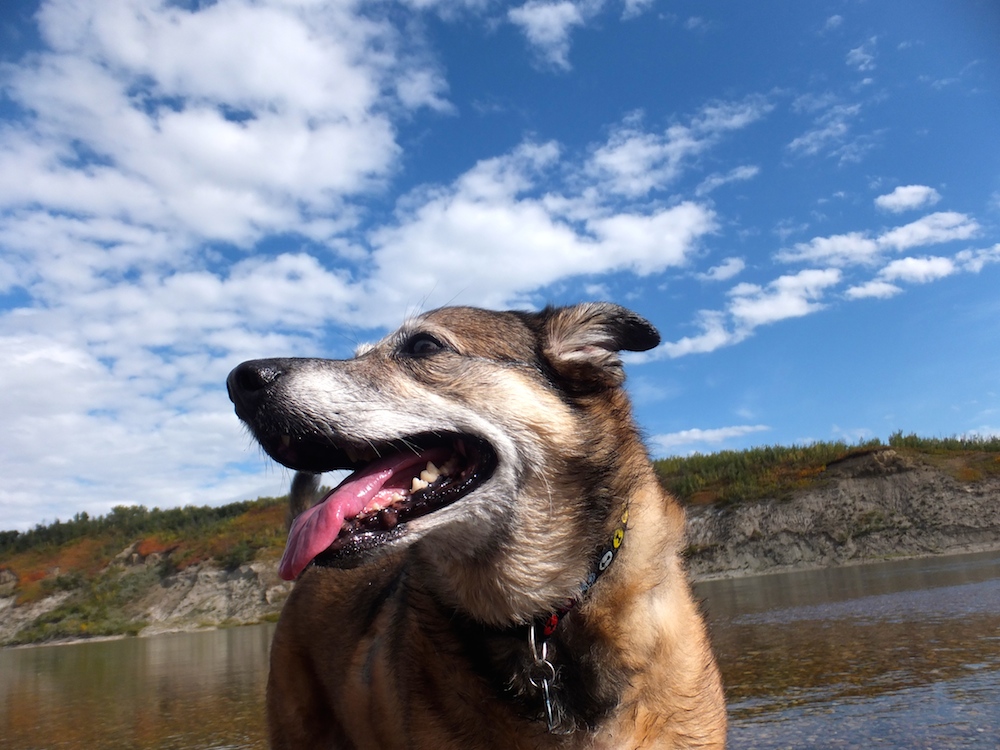 Last week Maggie was having more trouble than usual getting up. She was wobbly and sometimes she fell, and once she fell off my bed. She seemed to be listing to one side, her right side, and she just didn’t seem herself. She stopped eating her kibble, and few of her snacks. Milk bones were left untouched on the floor. She was also drooling, which was unlike her. Maggie was a barker and a licker, not a drooler. But also the most gentle dog that I’ve ever known.

She did not have a mean bone in her body. 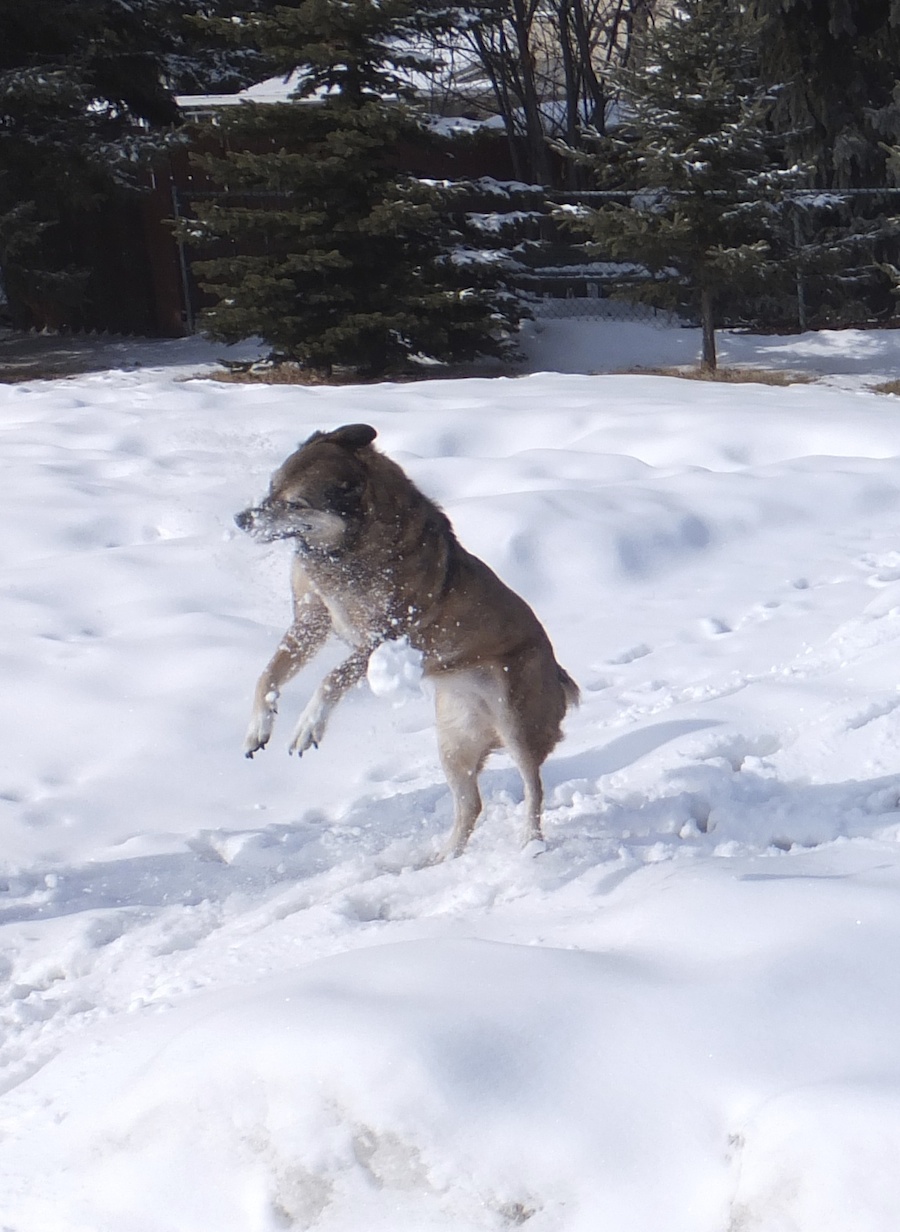 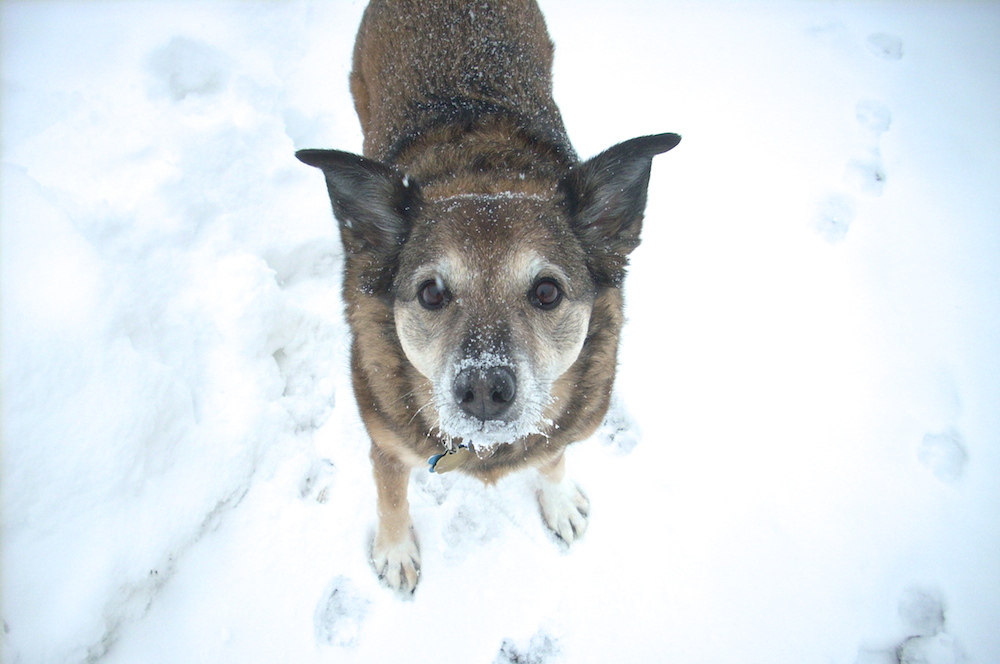 The day she passed, Kate called me at work. Maggie had fallen and could not get up. When I arrived home half an hour later, Maggie was on the floor in the hallway wrapped in a blanket, wagging her tail and lifting her head. She tried really hard to get up. I told her it was OK. We put her bed into the back of the car and drove her to the vet. My other sister Joanne joined us there. (Sharon, her beloved mum, was in Scottsdale and her dad in Australia.) I ran my fingers through her fur and kissed her and told her I loved her. On the table she leaned very hard into me. All three of us were crying. The vet and the assistants were all very kind. They knew Maggie and loved her too. The vet even kissed her, which I will always remember. He said, this is the day. She had suffered a stroke, probably several, and had another one in the doctor’s office after they had taken her away to give her a sedative. He brought us into the room with her and she was calm. Her eyes were closed. We were there when he administered the final drug and she passed away. It was hard and peaceful. 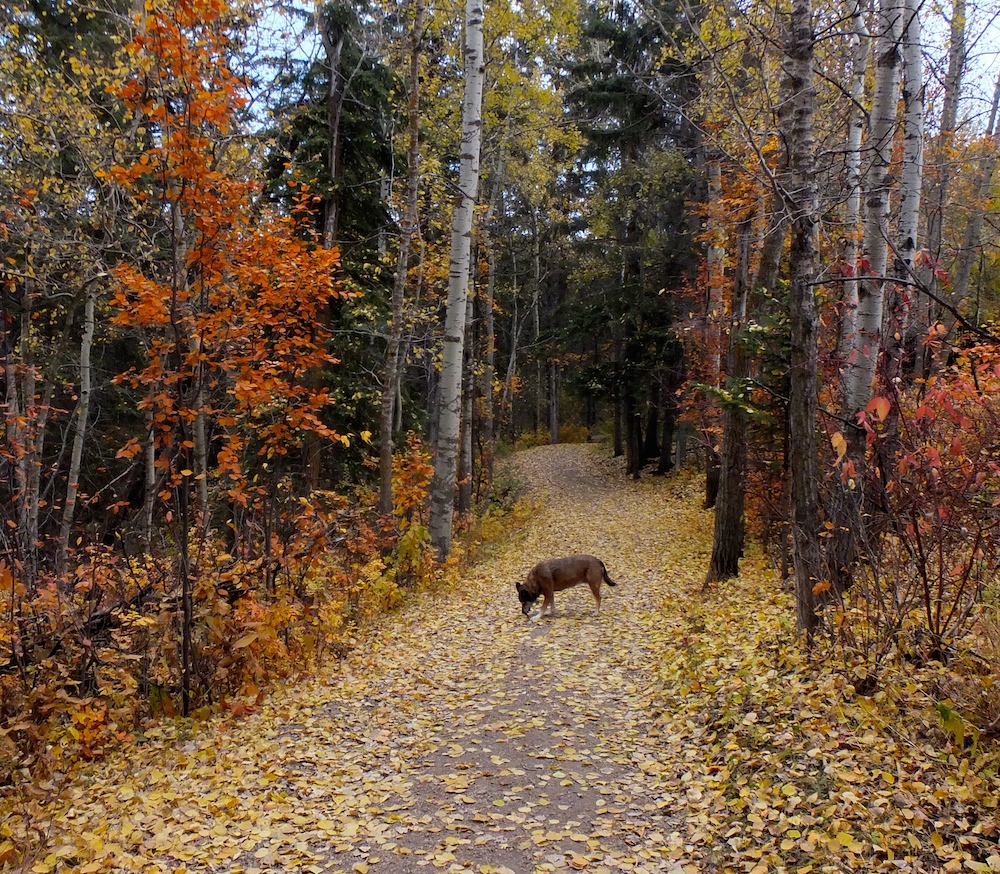 I am thankful that so many of our walks have been recorded in this blog. All the photographs and wonderful memories. Maggie had a long and happy life for a dog, somewhere in the vicinity of 80-90 human years. I knew her days were coming to an end, we all did, but that didn’t prepare any of us for what feels like a sudden absence. This week hasn’t been easy. I see her everywhere. All of my routines have been disrupted. I miss her snoring. I miss her happy barks when one of her pack members arrived home. I miss her helicopter tail. I miss the tap of her paws on tile. I feel badly for Sharon and Vic, who just happened to be away on the day. I am glad, however, that it wasn’t in the middle of the night. We were there with her, and for her, and her suffering was short. 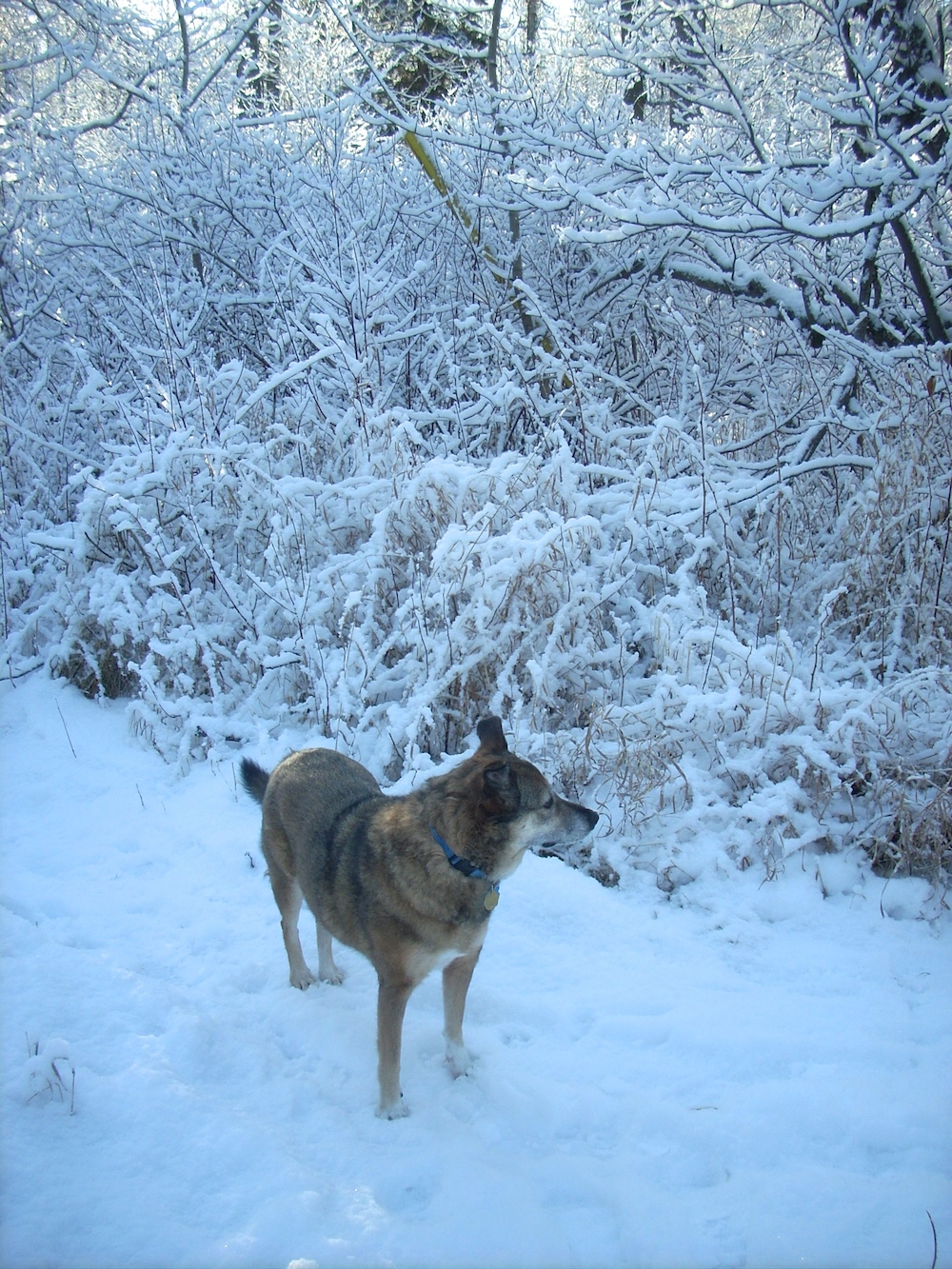 A weird thing happened. When our family dog Happy died in 1983, Cyndi Lauper’s song Time After Time, a hit on radio at the time, became inextricably tied to the memory of her death. To this day, the song, and in particular the lyrics, always makes me think of Happy, lagging behind on walks, peaceful and slow in old age. I was not as close to Happy as I was to Maggie, but I did love her. When we got home on Tuesday from the vet, steeped in grief, I went downstairs to my bathroom and turned on the radio. It was playing Time After Time.

Sometimes you picture me
I’m walking too far ahead
You’re calling to me, I can’t hear
What you’ve said
Then you say, go slow
I fall behind
The second hand unwinds 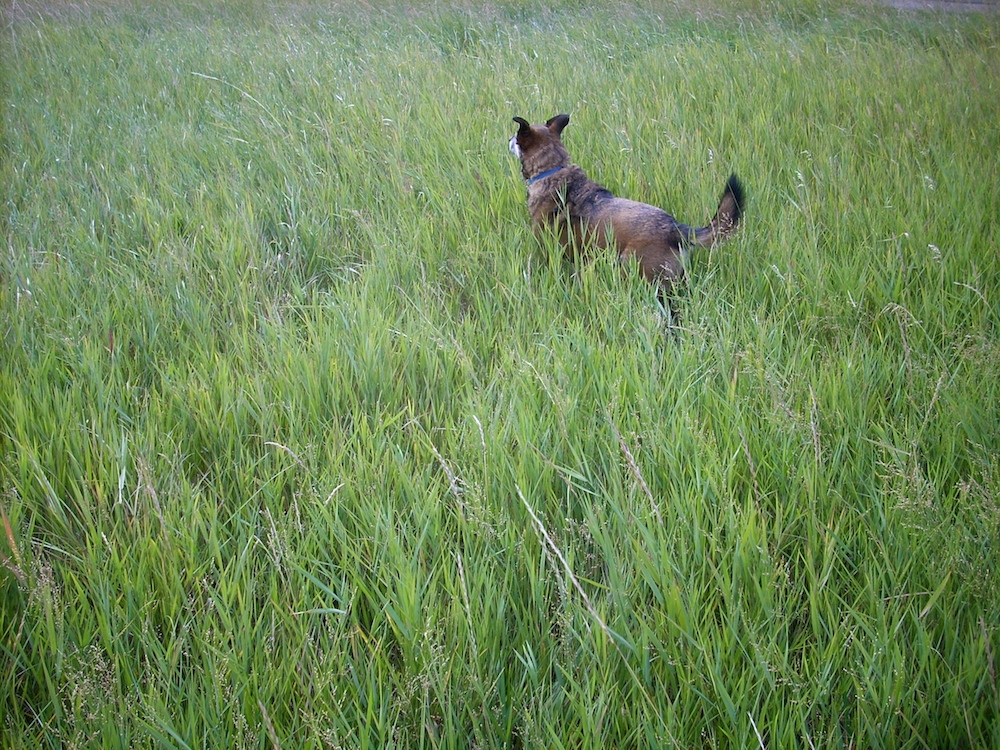 11 replies on “Goodbye my friend”