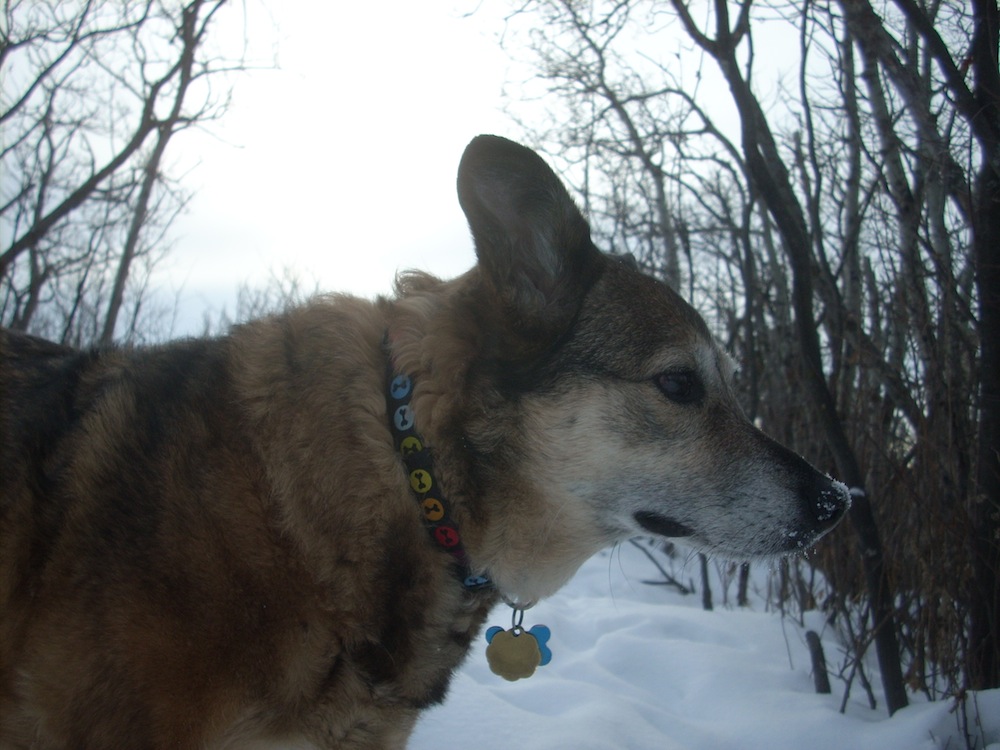 Hurry up you idiot, Maggie thinks…

Almost. Maybe not, but close. Dropped off at the Whitemud Creek trailhead in Westbrook. Lovely day. A little bit overcast, with the promise of blue here and there in the clouds. The first part of the walk was warm and soft underfoot after a brief snowfall in the early afternoon. Instead of veering right as we had been doing since the south access was closed in July, we veered left and took the trail down the hill toward the ‘first’ bridge. At the end of the trail, near the stairs, I saw a guy and his dog emerge out of the woods and noticed, for the first time, a path leading south. How hard could it be…I thought.

An hour later, I’m glad I escaped with my life. Perhaps the threat to life and limb is a bit of an exaggeration, but parts of that trail were very steep, and very narrow. I am SO GLAD I wore my cramp-ons, which I’m sure played a huge role in keeping me upright, and most importantly, alive. Without a word of a lie, the path in some places was the width of my foot, with nothing between me and a sheer drop to the frozen creek but a few twigs, some fresh snow, and several clenched orifices. Maggie seemed to be encouraging me from the other side, but I might have mistaken this sentiment for impatience. There were about five of these narrowed areas, many of them on dips in the trail, which only added velocity to my near-death experience(s.) The rest of the walk was fine, although the up and down continued until we emerged on the sidewalk at the top of the hill. Generally speaking, it’s the kind of trail I prefer, being in the woods and largely untrodden, but I’m kind of a chicken when it comes to falling (which I do often) and dying (not as of yet.)

Last walk before I return to work tomorrow. Still too dark after work for much of a walk, but at least we’re on the other side of the solstice. Should have walked more over my holidays.