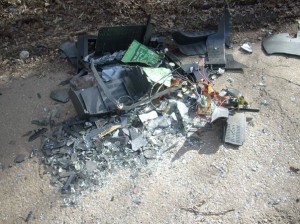 Not able to walk through the McKinney/Muttart corridor today. The area is being investigated by KARE, the police unit in charge of missing people, especially prostitutes. Specifically, they’re looking at Henrietta Muir Park. I almost always feel safe in the river valley, but this tiny park east of the River Queen dock and south of the Cloverdale walking bridge does make me a little nervous. It seems to attract the slightly unsavoury, but it does have a drinking fountain and it’s fringed by the Horticultural Society flower beds, so it’s not all bad. I mostly ignore it.

Unfortunately, this is not the only piece of bad news out of the river valley this weekend. A soldier named Richard Curnow went missing while on a run between Hawrelak and Kinsmen. Hard to say what happened, but I’m almost certain the river path near Emily Murphy Park is still covered in thick ice. It takes a very long time for it to melt because of the steady run-off from the hill and the trail’s isolation from the sun. About ten years ago I slipped on the ice and fell into the river, but that was in winter and the water was frozen. I hate it when things like this happens in the river valley. It’s such a benevolent space, and yet all kinds of human stuff, bad stuff, can happen down there. Not often, but sometimes. In the end, it’s reassuring to know that nature endures.

A pleasant walk today, but many dodges, including Scona Road. I may start walking to work. I used to do this, and it might be time to start again. Good hair  is overrated. I guess.