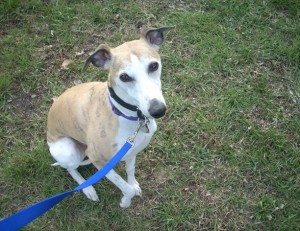 Well, one, actually. And it wasn’t a long walk, just a ‘business’ walk on behalf of his otherwise engaged owner. Still, he was friendly with the other dogs, avoided the rabbits, and was in all ways an affable walking partner. This is a dog that was born to run, but is also a champion napper. Happily, he was content to walk around the ball field a couple of times, pose for a few pictures, slurp a mouthful of water, and head up to bed to wait for his mum. Good doggie.

After I tucked him in, I continued on my walk, which was largely uneventful until I reached the top of Scona Hill. The sidewalk is still open, but showing signs of its imminent demise. As I made my way up the hill in my usual oblivious state, a dog wandered by on my right side. No owner, no collar. I looked ahead and saw a woman, so I asked if it was her dog. She shrugged her shoulders. The mid-size, reddish dog was sniffing around the construction materials and not looking particularly concerned about the rush hour traffic a few feet from his nose. I walked up to the woman, who was incidentally holding a bottle of windex and some paper towels in her hands, and she explained that while she was cleaning windows, she saw the dog run across the road. Without dropping a single cleaning product, she ran after the stray, but the dog was unresponsive to her calls. I offered to try, so I wandered over to where the dog had been and whistled but he had already disappeared into the ravine. I walked farther down the hill and called for him, but the dog was gone. Obviously, he was determined to take advantage of his (hopefully) short-lived freedom.

The woman and I chatted on the way back to her house (with the partially clean windows) about stray dogs in the neighbourhood and how we both hoped this particular stray would have his adventure and then head back home. And then we talked about our cats.

So, my hour long walk took about 90 minutes but what it lacked in speed it more than made up for in dogs. I do hope that wandering mutt is OK. Best of luck, doggie.