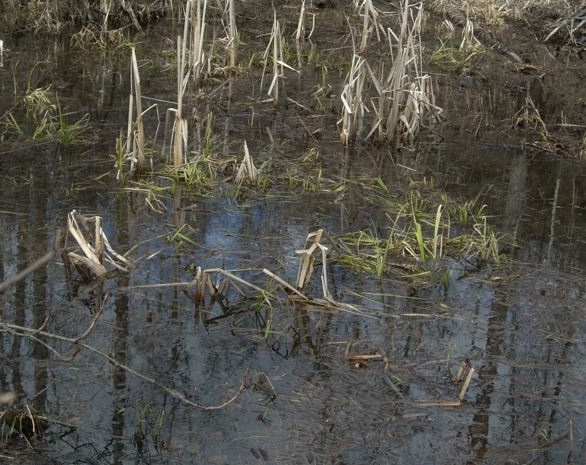 The Mill Creek frog bog is at full-croak! Last year, early spring was droughty, and the bog never filled up. This year, it’s never been empty. On my way home from a long walk this afternoon, I heard that strange cracking sound coming from the bog, and I knew my froggies were back. I stood on the edge watching the rippling water, and the occasional frog head poking up above the reeds, being ever so grateful I was in the right place at the right time. I should really geek-out and start carrying binoculars as it was impossible to make out their individual froggy faces, but there seemed to be a great many of the tiny amphibians, all vying for the attention of the aloof girl frogs. At least I think that’s what’s happening. Why else would they be singing their little off-key hearts out? About ten minutes into the concert, a magpie swooped in and landed on a nearby branch. The almost deafeningly-loud bog went dead quiet. Nice to know I’m not preceived as a threat, but they sure know an enemy when they see one, if they actually saw the magpie, of course. Maybe they just heard it, or perhaps, there is a sentry frog watching out for the local predators. Anyway, I waved my hand and the magpie flew away. Five minutes later, the bog was still quiet. A sign that I should leave too? Might as well. A bog without frogs is just a slough.

**Addendum to this entry: A few days after this post, CBC’s Radio Active played an interview with Brian Keating about the Boreal Chorus Frogs, which are the very fellows profiled in this bog blog. It was very thrilling to hear this guy, who shares my enthusiasm for these little froggies, but unlike me, has some education to back up his opinions. Here is the interview.

The good news continued. Godzilla is back spewing water in his terracotta pot in my neighbourhoood, so spring is well and truly here. Looks like he’s had well-deserved buff & shine; his eyes have never looked so beautifully radioactive. Welcome back, brother. 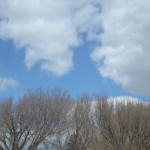 The weather can’t quite decide what it wants to do today. Alternately, I was cold, or too hot and wishing I’d worn shorts. The sun, when it was out, was very warm, but there’s a lot of clouds in the sky and yesterday it rained. I really do need to graduate to capris, or shorts, and pack away the leggings for the year. There is very little snow, and the paths have largely dried up. Three weeks from now, it will be a transformed landscape, but for now, brown prevails.

Walked over to McKinney through the lower path in Mill Creek. Quite often I see ducks in the water by the intake valve, but not today. Even the North Saskatchewan was missing it’s usual contingent of sqawking seagulls. The island is submerged under the fast-moving river, so their perch is temporarily gone. No geese either. Just robins. And frogs. The woods sounded very lovely today.