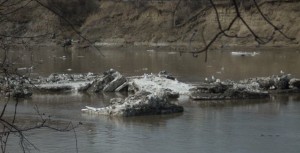 A perfectly lovely, albeit lengthy walk. About two and a half hours, the last fifteen of which I was jonesing for a cab. Sadly, none showed up.

Got off work a couple of hours early, so I continued on my quest to undo the intermittent sloth (and sickness) of late winter/early spring. Might be overdoing it a bit, but it’s been so splendid, weatherwise! Walked up to the legislature and then downtown to McKinney. Over the footbridge, I spotted some giant ice blocks floating down the river which had knocked themselves into an impromptu island, populated by a flock of squawking seagulls. In spite of my fatigue and ridiculously heavy backpack, I decided to take a slight detour to see if I could get a close-up shot of the glacial aviary. Turns out, my go-to path adjacent to the river was blocked by frost fence and sludge.

You Shall Not Pass!

The fence was hardly a barrier (ahem), but the muck was pretty bad, and this being an unmanicured path, no one removes the detritus leftover from a harsh winter. It was almost impassable, in other words, but I managed to dip in a few feet and take a some shots. The gulls were very loud, probably missing their land island buried somewhere beneath the ice and water.

Really gotta find my summer clothes. I baked in my leggings and jacket, and probably looked a little dorky. As per usual.