A fabulous, spectacular, gorgeous, sunny, life-saving, fat-busting, mood-lifting, gob-smackingly lovely walk. So needed, and yet so avoided, for reasons of frigidity, storminess, barfiness, and general miserableness. Fell once, but that was OK. Had to wear my hat and several layers of clothing, but that was OK too. The quantity and quality of snow suggests January, but the position of the brilliant sun is all March. In fact, when I looked over the Cloverdale Pedestrian Bridge I saw the unmistakable footprints of Mr and Mrs Goose, back for another year. I could have sworn I saw two geese flying in the sky a couple of weeks ago near Connor’s Hill, but I chalked it up to hyperthermia. Too soon, and  yet, here is the proof: two sets of goosefeet, like a double pearl necklace strung between the Cloverdale and the Low Level Bridges. Well, I suppose actually seeing them would be the proof. Last year, my first sighting was March 14th, so it’s gotta be them. My Louise McKinney Park geese. Come home.

I also saw a pileated woodpecker in the woods near Skunk Hollow, but it was too far away to get that ‘pileated ‘pecker thrill’ that comes with a close-up viewing of those strange birds. 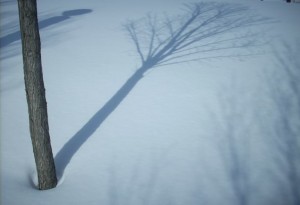 A shadow of its former self

Skunk Hollow was at the end of my walk. I started in Mill Creek, which was particularly pristine after yet another snow ‘episode’ yesterday. Colour variations in the landscape were almost non-existent, obliterated by the bright noon sun, the cloudless blue sky, and the sparkling white of the snow. It’s later in the afternoon when the sun is lower that the snow goes purple.

I hope that this is the start of a trend, both in the warmer temperatures, and a more consistent pattern of walking. Distance walking, not those short little jaunts down Saskatchewan Drive. Within ten minutes of being outside, I felt better. Perhaps not like a million bucks, but maybe a quarter mil. That’s good for now.