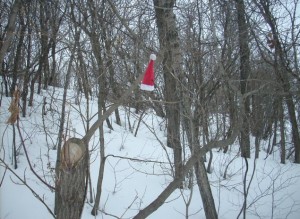 You should see the mittens

…or howls, or yips, or whatever that sound was coming from deep within the woods today. Almost as soon as I stepped foot onto the trails in Mill Creek, I heard the coyote. It’s not an uncommon sound down there, but this one sounded urgent, even plaintive. Coyotes, I assume, have a variety of vocalizations at their disposal, but the one I hear most often is a version of what I heard today: a kind of hyena-like yipping, albeit not quite so loud, and stressed. I changed course and started following the sound, but after about ten minutes I lost hope of breaching the gap. The coyote was walking away from me as fast as I was walking toward it. So, I turned back. A minor diversion that could have been interesting.

I spent about a half an hour trying to convince myself to go for a walk before I actually put on my gear and hauled ass out the door. It’s grey and cold today, and my short walk to the Strathcona Farmer’s Market this morning was unpleasant; a brutal wind directed right at my face parts for the entire duration. However, it was worth the loss of the uppermost layers of my skin for the green peppers, which to my great delight, have returned to the stand of my favourite veggie procurer. Anyway, I was not particularly pumped about venturing outside again, but this time, I wore a hat, which helped. Other than the coyote, it was pretty uneventful. Got mauled by a large poodle in south Mill Creek, which was sort of fun. One of those really big poodles. The person was apologetic, but really, it was the most action I’ve had in a long time, so no harm.

Spotted a tiny, red hat on a branch in the woods near the pool. Either someone has a severe case of microcephaly (but is nevertheless rather jolly), or Mill Creek has elves. Maybe that’s what made coyote howl. Bagged himself an elf. I imagine it’s a pretty skimpy meal, more like an apéritif. Nothing else to report. White skies, white snow, none of the promised warmth. Still, better than sitting inside and feeling sorry for myself. If only I could howl like that coyote.