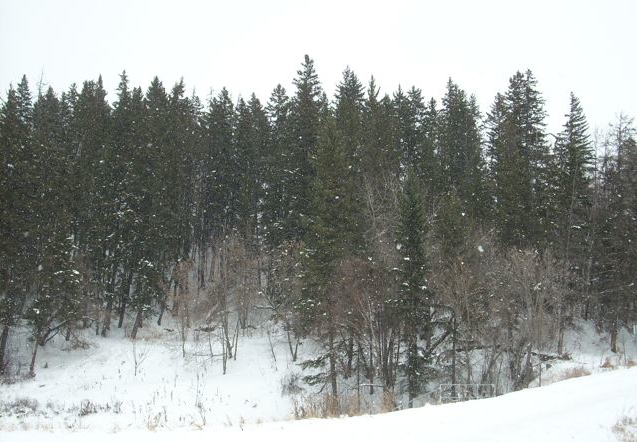 Bad timing, perhaps. I walked to Whyte Avenue this morning and sky was overcast and unremarkable. Little did I know the clouds were withholding a fortune in snowflakes, waiting…I think, for my first step into Mill Creek in the early afternoon. Really, it’s like being caught in a rainstorm…there’s nothing to do but enjoy it. And I did. The scenery was just stunning, all of it, everywhere. The deep green-grey of the spruce and pine trees, their individual shapes dissolved by a thousand million snowflakes. The almost blinding white of the valleys and hills, the snow thick enough to conceal all but the tips of the tallest grasses. Sometimes I had to blink a few times to see the trails, 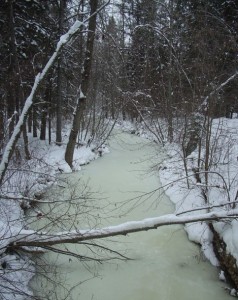 A creek made of lime slushie

the packed snow almost invisible against the stuff undisturbed by foot or ski. Most surprising was the creek, free of snow, but turned an impossibly bright toxic green, which was quite spectacular against the subdued colours along the banks. Can’t explain it, and the picture I took did not capture the day-glo strangeness of the colour.

I stopped several times to warm up my camera in my hands, which didn’t help. I left several achingly beautiful scenes unphotographed, simply because my overly sensitive lens refused to expose itself to the cold. It would peak out for a second, and then abruptly retreat back into itself, like a turtle. An introverted turtle. Most annoying. Even though my efforts to warm the camera proved futile, I kept trying, and each time I stopped, the sounds of the ravine came flooding into my ears. Sparrows and chickadees singing and foraging in the trees and bushes, oblivious to or maybe just not minding the snowfall. And how do do describe the sound that snowflakes, a million weightless snowflakes make as they alight on branches? It’s something, but what? A fluttering? The softest of rains, the quietest hum, heard at a distance? I could hear the birds, and I could hear the traffic from 99th and the river valley, but there was something else, and it was the indescribable sound of a snowstorm.

This was the last walk of my holidays. Back to work tomorrow, and back to late afternoon, early evening walks. Mostly in the dark, although we have gained about twenty minutes at the end of the day. As usual for the Christmas break, I didn’t walk as often as I would have liked, but the horrifying cold and the fear of amputated extremities kept me inside. It’s warmed up considerably as of a few days ago, and I’ve been able to take advantage of the good weather. This includes today, in the falling snow.