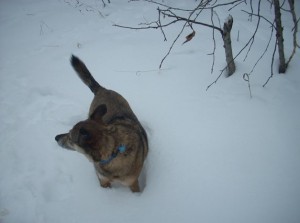 Have you seen my paws?

2011. Shouldn’t I be wearing a jet-pack, instead of a fleece? Nothing futuristic about a fleece and mittens. The first walk of 2011 (and the last four days.) Not bad, and sort of good, in parts. At the beginning, the wind seemed as if it wanted to rip the first layer of skin off my ears (I forgot my hat), but by the time Maggie and I reached the ravine, it was pleasant enough. Maggie was certainly happy to be outside, plowing the snow with her snout. She lifted a foot or two during the first five minutes of our walk, but I think her discomfort had more to do with the salt on the sidewalk than the cold, which has ‘warmed’ up to a balmy -8C, from -17C yesterday. I had hoped to do a lot of walking in Whitemud Creek while dog-sitting, but it’s been bitingly cold. The dog and I have been going stir-crazy, so we ventured out briefly yesterday. A quick romp in the park, and Maggie was done. Back home to more sleeping (her) and more eating (me.) I’m glad it’s warming up. I’m becoming unrecognizable. 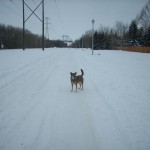 One of two Maggies, by the powerline

There was a bit of a melee at the power line, which leads to the ravine, but no blood, and no arrests. A big yellow lab tackled us (several times), in a playful way. Turns out, she too was named Maggie, so every time I tried to pull my Maggie away, the other dog thought I was calling her. With all that heft and hair, the dog was impervious to the cold, and not particularly obedient, but I think Maggie enjoyed the brief, non-human contact. Pee-mail has its limits.

Once we hit the ravine, it started to snow. Maggie could barely contain her excitement at being outside after so many days locked up in the house with a cat (mine) who somehow manages to make her feel unwelcome in her own home. That’s what I love about dogs. They are always in the moment. Happy just to be 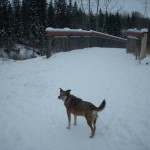 standing at the door, anticipating a walk, or maybe another visit from Santa, or chasing an almost invisible snowball in a blindingly white snowfield. We didn’t get very far. Followed the creek for a bit, and then the other Maggie showed up, so we turned around and went up the other side. Normally, we would have continued all the way through Whitemud to the ski hill, but about 45 minutes into the walk, Maggie sat down. That’s dog for, “I’m done, and in need of a belly rub and a light snack.” We ran down the hill, the snow driving into our faces. It was exhilarating, but cold. Hopefully tomorrow it will be a few degrees warmer, and we can go for a much longer walk.