Once more into the snowy breach (by the Macdonald Hotel)

Holycowthatwasagreatwalk. Really. It’s been so long. About a week since I’ve gone for a proper hike, and it felt GREAT. The decorations are packed away, a book has been cracked open for the first time in a month, and I am tentatively back to my usual eating and walking routine. It sucks to be off-kilter. Overfed and overstimulated, and almost completely underexercised. It’s the same thing every December. Apparently I’m a slow-learner. An astonishingly fast eater, though…

I could have gone for a walk yesterday, but it seemed to take the entire day to dismantle my tree and wrap everything up for another year. Bending down a thousand times to pick up fake pine needles, or some sparkly bit dislodged from a decoration does not count as exercise, but it should, damn it. After battling the tree (fondly known as Mangy-Anne), I had no energy left for a walk, so I did something that did not require any lifting, hauling, packing, wrapping, bending over, or the unhinging of my jaw. I read a book. Sebastian Faulks, A Week in December. I read for hours, from late afternoon, well into the evening (with a hour’s pause for Celebrity Rehab.) It was grand. I hope to do much more of this during my week off, barring any particularly tasty marathons on HGTV.

The trails were as I left them, snow-covered and mostly pristine. Courtesy of the flocks of drunken Waxwings 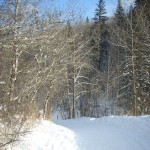 swooping about, some had bits of twigs and berries strewn across the path. Others, like the one near Skunk Hollow, seemed barely touched by hiking boot; just the criss-cross of skis. In spite of the overcast morning, by 11:30, the clouds buggered off just in time for my walk. I can’t overstate the impact of blue sky and sunshine on my overfestived brain. It’s not that I’ve been unhappy, it’s just that I’ve been indoors. Even though the sun has no warmth this time of year, what it lacks in heat (and vitamin D) it more than makes up for in cheer. Sort of like a G&T over ice. 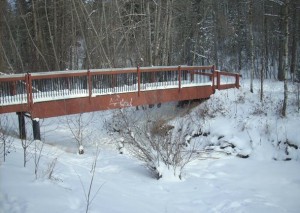 I did a loop from the middle of Mill Creek to downtown, and then back through the trail behind Skunk Hollow. About two hours. A bit slower than usual, I think, but I’ll pick up speed in the next few days (and weeks), once the vegetables overtake the shortbread in my sluggish veins. It’s supposed to get colder, which is a bit worrying. I’m moving south for a few days to take care of a beloved doggie, who is very much looking forward to taking me for some ‘awesome frolics’ (her words) in Whitemud Creek. Hopefully the weather will remain walkable for the rest of my holidays.