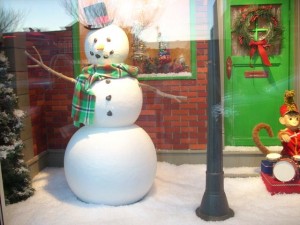 Gotta love my neighbourhood. Last year, The Tin Box on Whyte Ave, whose windows are always fabulous, added a moving Christmas display right out of A Christmas Story. No Red Ryder 200-shot Carbine Action Air Rifle, but it had a sparkling snowman and three monkey drummers, and it was a big hit. This year, the newly named Return of the Magic event has spread to nine other stores along Whyte Avenue, and it’s quite simply, a blast. A blast from the past.

When I was a kid, I remember riding a trolley bus downtown (thrill #1), to see the Christmas vignettes in the windows of the Hudson’s Bay Company (thrill #2), with my older sisters (thrill #3). That was many, many years ago (at least ten.) The trolley buses are gone, and so is the Bay (in that location), but the monkeys are back, and the bears. And my sisters? They still take me places. When I promise to be good.

I knew something was up when I was walking around Whyte Avenue last Saturday. A few of the stores had sheets

of brown paper covering their windows and posters with strange Return of the Magic teasers. Once I saw the snowman display at The Tin Box, I figured something whimiscal this way comes. Astonishingly, the vintage animatronic characters, which also includes bears, elves, and a Jesus, were found tucked away and forgotten in a basement. Re-furred and refurbished by White Rabbit Creative Enterprises of Edmonton to a sparkling, candy-coloured sheen, you could eat off those bears, but I wouldn’t recommend it. They look friendly, but you know, they’re bears.

It makes a lot of sense to set up these Christmas displays along Whyte Avenue. Unlike downtown, the area not only has pedestrians, it is pedestrian welcoming, with year-round tree lights, the occasional bar, glass store-fronts, and a whole lot of ridiculously creative window displays. The Wish List (otherwise known as the Christmas store) always has a crackingly good festive display, and Laurels on Whyte often incorporates a live Weimaraner into their art glass window arrangement. That is, if she has a mind to sit in the window…quite often she’s curled up by and/or on the cash register. Taking the windows of Whyte Avenue to this next level seems a natural progression. If only it would snow. It’s Christmas, apparently. 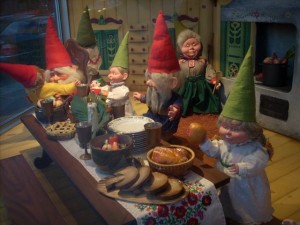 When Elves Cook at When Pigs Fly

As the darkness descends on this side of the hemisphere, chasing me out of the river valley and on to the streets, as it were, these shorter walks along Whyte Ave have some compensations. Let’s face it, I’ve seen some amazing things in the woods, but the squirrels do not wear band uniforms, nor do they play instruments. How very disappointing, and lazy. If I have to be ‘above ground’ for the next two months, at least I’ll have something to enjoy.