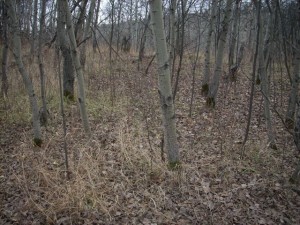 A vision of subtle

It’s raining, which means, it will be snowing soon. Don’t know why that should bother me, and in fact, it doesn’t.  I just hope that when it does snow, it’s the attractive stuff. Not the tiny, hard pellet stuff.

As I was walking home from the Strathcona Farmer’s market, the sun came out, which caused me to rethink my plans for the afternoon. I was going to catch up on some reading, but decided to go for a walk instead. The weather people are forecasting all sorts of nasty things for tomorrow, so a walk in the sun seemed a prudent choice. However, by the time I got into my gear, the sun went back from whence it came, and the clouds moved in. Tomorrow’s clouds, all heavy and grey with rain. I went anyway, and it turned out to be one of those gorgeous, mind-calming autumn walks where the sleeping landscape offers every nuance of earth-tone colour, and the chill, though present, never reaches the bone. 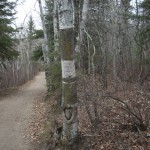 And then it started to rain. I heard it first, rustling the dead leaves. I was only about 20 minutes from home (or more specifically, the bakery), so the barely there drops were no bother at all.

The surface of the river has a stream of translucent ice crêpes, but not the thicker, and far more serious ice 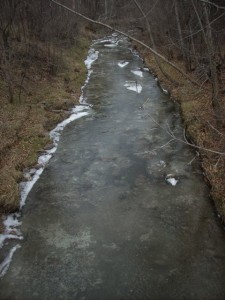 When Mill Creek freezes over!

pancakes that herald the freezing over of the North Saskatchewan. Also, Mill Creek is partially frozen, but the water is still running below and over the ice. Same as last year. There was no snow on the ground either, so the open paths and brown landscape does not seem that unsual. What is unusual is that I keep running into cats. It makes sense that the cats who are allowed to wander outside in this area would eventually make their way into the ravine, but I rarely see them. On day three of my four days off, I’ve now seen about six, and I even watched a black cat take out a mouse yesterday, which was rather surprising, especially for the mouse. I just happened to be looking in the right spot when a cat leaped out of the tall grass and seconds later, strolled casually through the stalks looking incredibly proud, with a dead mouse hanging from it’s mouth. I’ve seen the same look on my cat’s face when she pounces on a potato chip. Can’t imagine letting my kitty outdoors, especially in these coyote-lousy woods. Nevertheless, the cats, all of them, appeared to be happy enough.