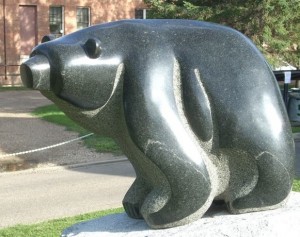 Addendum to yesterday’s ‘A Bear in the River Valley‘: Stewart Steinhauer very kindly provided the following background for the sculptures in Rossdale. It seems he is as eloquent and charming a writer as he is a sculptor.

“The typical mother and child motif is actually a riff on my Cree ancestor’s notion of earth as mother; the little figure in her “lap” is a character from an Ojib-Cree ceremonial story, part human and part eagle, in transformation. The whole thing is metaphorical, like most “simple” Cree stories. A sustained reading will take you down the what the bleep rabbit hole, but that reading requires getting right into the ceremonial space.

Same with the bears. They are metaphorical references to an extended notion of relationship, inter-relationship, inter-species relationships, and the larger relationship with our lovely little blue planet hurtling through space. I think these ancient metaphors were meant, on one level, as a set of guide posts, or land scape markers, to help us fragile humans in our social wanderings. I’m putting the metaphors into a concrete form, in granite, and placing them on the lands that were once the free home of my ancestors, as a message to some far future generation which may have developed our human capacity for intelligence into an actual intelligent practice. Mother Earth is very beautiful, and we are so lucky to be here, now….we just don’t get it, yet….as a species.”

Really lovely. Thank you Mr Steinhauer, for your thoughtful words, and the beautiful granite creatures that inhabit the river valley. I feel very lucky indeed to be here, now, especially when I’m walking in the river valley, amongst the trees and bears.