A bear was spotted in the river valley near Fort Edmonton Park last week. From the media reports, the impression was that this person was perhaps, you know, seeing things…mistaking a tree stump, or maybe a fat labrador for a bear, until Alberta Fish and Wildlife found some bear scat, and the ‘sighting’ became real. When a bear shits in the woods in Edmonton, everyone pays attention.

Coincidentally, I hiked in that same area around the time of the bear sighting, and I too sampled the local Saskatoon berry harvest, but I did not see a bear. Not even a fat labrador.

However, I can personally vouch for bears in the river valley. I pass one almost every day. This bear is huge, beautiful, and made of stone. It sits outside the Rossdale Community League year round. The sculpture is by Stewart Steinhauer, a ‘self-taught sculptor/foolish person’. A few years ago, there was a kneeling black bear and a polar bear, and I  think it was called Mother Bear Prays For Earth, or something like that. Extremely moving, and a really unusual feature in any community, but the bear is not the only stone resident of the neighbourhood. 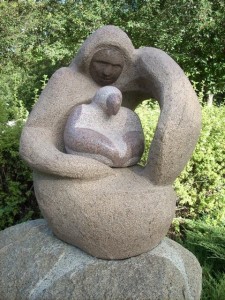 There is also a permanent sculpture a block up the street, next to half moon of benches. From a distance, it looks like a typical mother and child pose, but up close, it’s quitestrange, and rather sweet. It’s from Steinhauer’s mother earth series. I don’t know who is commissioning or purchasing these Steinhauer sculptures for Rossdale, but the residents are extremely lucky to have such a thoughtful benefactor. Aside from the annual June/July infestation of hideous green caterpillars, Rossdale is already a beautiful area of the river valley; these sculptures are literally gilding the lily. It seems ridiculously unfair, but at least I can visit them whenever I want, and to be honest, my neighbourhood is not without it’s own sculptural attractions, but nothing quite like these stone lovelies.

Other than a bear sighting, nothing out of the ordinary on my walk today, unless you count warmth and sunshine. Oh snap!