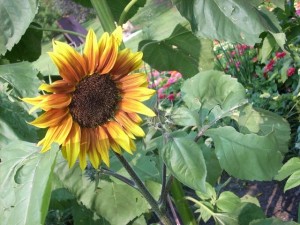 Such a beautiful face!

I’ve noticed quite a few poplar trees sporting yellow leaves in the river valley. One near 99 St is entirely yellow, but I think it shuffled off this mortal coil a few weeks ago. Just couldn’t take any more airport controversy, I guess.

The sun is setting before 9:00 now, and I’ve noticed that I’m waking up in the dark, or trying to wake up in the dark. In the middle of winter, it’s the light I miss, not the warmth. Having said that, it was a a bit chilly today, or at least the first part of the day. I don as little outerwear as possible in the morning, because I have to carry it home in my backpack in the afternoon, along with all the other shit I’ve brought. There are times when I’m sure my backpack is going to explode. It’s an unsavoury thought, having to crawl around in the woods, picking up tupperware lids, bits of leftover sandwich, an uneaten apple which permanently occupies the bottom of my backpack , my ‘day’ bra (as opposed to the sports model I wear for hikes), half-finished bottles of gin, and all the bits and pieces it takes to get me through a day of work. It’s worth shivering in the morning, trust me.

Saw a guy riding a Segway on the Cloverdale Pedestrian Bridge this afternoon. I thought it was a scooter scooting up behind me. Nope, just some guy in a helmet, standing at a dopey angle on a motorized dolly. There is no way to look cool on a Segway. David Bowie would not look cool. Clint Eastwood (circa Dirty Harry) would not look cool. Barack Obama would not look cool. And those are the coolest dudes around. Not that looking cool is a requisite for modes of transportation, but there is absolutely nothing sexy about those things. They are the PT Cruisers of two-wheeled vehicles.

Other than the first scattering of autumn leaves and a dork on a Segway, it was a relatively bland walk home, via the downtown/McKinney route. Warm, but not hot. A slight orangey haze in the sky. Made it door to door in about 60 minutes, 55 of which I hardly remember at all.