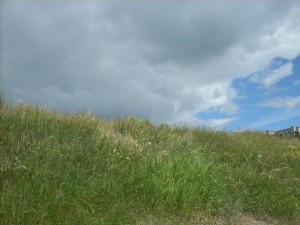 Little cloud on the prairie

The theme of today’s walk? Bulldogs. Also, pitbulls, the dogs with Riddler grins. Gotta wonder…is there a legalize weed event going on somewhere in the river valley? Doesn’t that international inhalathon take place on April 20th? Maybe it’s just a coincidence. I have noticed that some days one type of dog prevails over another, but it did seem weird to see all those stout little creatures on the trails. And their dogs.

It’s coolish today, but still managed to work up a sweat running up various staircases encountered along the way through Mill Creek. Even though I often take the same general route, especially if I’m starting from home and not work, it’s easy to switch it up with different monkey-paths, staircases, and add-on trails. I rarely get bored, but I do find this part of summer in the river valley to be uneventful, in the sense that everything is at its peak. Nothing is noticeably growing or dying. There is no discovery, only enjoyment and acknowledgement, which is just fine. I am, however, looking forward to fall, just because change in the river valley is always exciting. Seasonal change, that is, not change as a result of drought, fire, or pig-headed, hypocritical city councils hell-bent on building a LRT system through the river valley. Pretty coloured leaves and flocks of migrating birds. Now that’s good change.