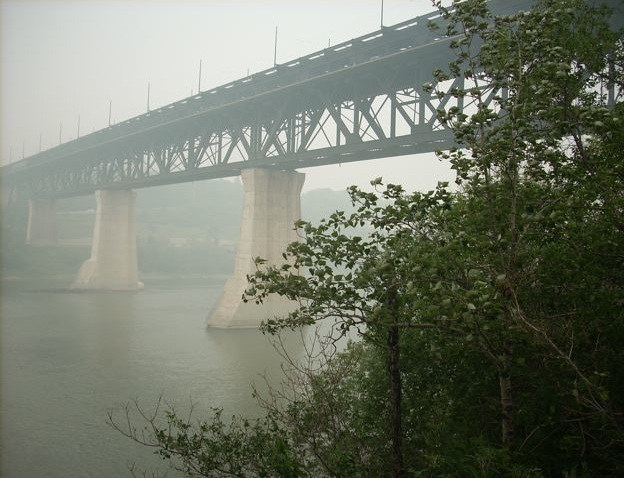 Smoke on the water, there’s fire in the skyeee

Or maybe just a schmoke?

Wow. It’s really something out there. Noticed it around ten, when my office was suddenly awash in orange light. An hour later, the smell of smoke was chokingly thick. The fires are in BC, near Williams Lake, but it feels like it’s right next door. Even looking down the long hallway at work, I could see smoke.

While I was walking outside at lunch, I almost ran into a fat honeybee. I had to duck, because the bee appeared to be stationary, suspended in the air, not even buzzing. I wonder if this bee, and bees in general, get discombobulated by the smoke? I know it’s used in beekeeping to calm them down, and this bee was definitely calm, downright dopey in fact, but is there enough smoke in the air to affect the little fella so drastically? Maybe it was just a dumb bee.

With all due sympathy to the poor folks (trees and animals) in BC, and asthmatics, it was a spectacularly weird and beautiful walk home. Everywhere, a watercolour painting. Buildings completely obscured, trees blue in the distance, landscapes coming to a point, and then disappearing. 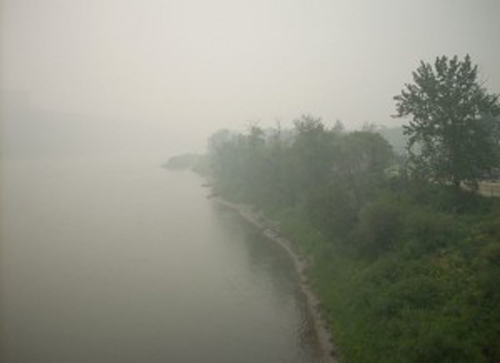 Chatted with a fellow who was walking his bike up a hill. He said it’s part of global warming, and he’s probably correct. The pine beetles, which have only now become a problem with our warmer winters, have killed or weakened large swaths of trees in BC, turning them to tinder. He also mentioned the floods in Pakistan, and while I agreed with everything he said, I couldn’t help but be overwhelmed by the beauty of the landscape. Familiar surroundings made so strange by the smoke. It’s stunning! There, I said it. 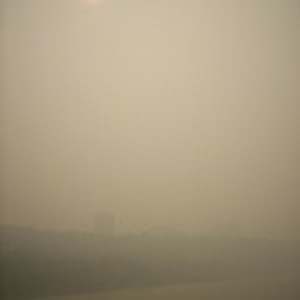 After an hour, my eyes were getting irritated, but I didn’t notice any difficulty breathing. Must be all that dark chocolate I consume.

2 replies on “A Schmoke and a Pancake?”