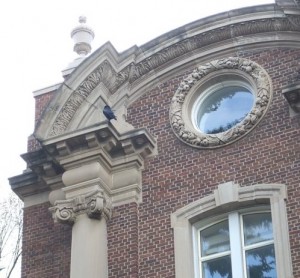 May appear smaller than actual size

Shorts, a t-shirt and single-digit temperatures are not a good mix. On the positive side, my legs finally have some colour. It’s like they’re blushing.

There is a raven’s nest on top of the old Arts building on campus. Noticed it at lunch. Actually, I noticed  two guys pointing up, and then I saw the nest, partially obscured by the HUGE raven perched on its edge. The bird was fantastic, like a beautiful, black gargoyle. And the sound coming out of that thing! The raven’s neck feathers were puffed out in agitation, and it was screaming at us, or maybe it was screaming at the wind, which is much more of a threat to the precariously placed nest than the gawking idiots scuffling about below. When I returned with my camera several hours later, I watched the raven swoop in for a quick drop-off at the nest, but it flew off before I could snap a picture. Very impressive.

The parade of animals continued as I made my way through the river valley. 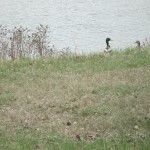 Saw two ducks, a male and female, sitting on the bank of the North Saskatchewan River. Their presence, and perhaps the presence of a nearby nest was driving the magpies crazy. They were louder than the cars on River Road.

A brown hare was sitting on the grass, keeping an eye on the magpies,

the ducks, the cars, and me.  All this drama, and then the batteries fell out of my camera.

The weather people are forecasting rain again, but I don’t believe them anymore. The ground on both sides of the path running through Rossdale is completely littered by branches and occasionally, entire trees that have fallen prey to the drought, and most especially the wind. Some of the damage is from the BIG WIND STORM of 2009, but alot of the damage is recent.

So…I’d like to say a special thanks to the trees for not falling on me. Judging by the sound and frequency of the creaks, it was a definite possibility.