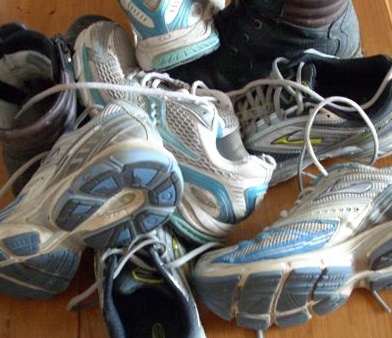 Shoescape from my very first blog post in April, 2010

Well, I finally launched myself out of my sister’s basement (hoisted might be a better word) and moved back into a walkable neighbourhood. It took six years, most of them very happy but largely unwalkable (from a commuter standpoint). I’m not going to belly gaze too much on that one. I already know I’m prone to inertia when it comes to major life changes, and the location in south Edmonton with my family – furry and non-furry alike – was just comfortable enough, and my career, at times, too precarious to make any sudden moves.

And so, six years later…

Instead of moving back into my familiar haunt in Old Strathcona, however, I’ve opted for downtown, in Oliver. It’s even more walkable, but alas, it is not two blocks from my beloved Mill Creek Ravine or ten minutes from my (also beloved) Whitemud Ravine. But, what it lacks in immediate ravine access it more than makes up for in walkability to work, amenities and the river valley. I just moved in last week, so between a spare room half-filled with boxes (mostly books), and building new bookcases for said books, I’ve not had much time to explore the ‘hood, although I am vaguely familiar with it.

I walked home once last week, and it was great. Not through the river valley, but across the High Level Bridge and then along the path that snakes around the edge of downtown above the river. It took about 45 minutes. Eventually, I will take the various river valley routes home, but it’s just been too busy. I don’t feel that relaxed at the moment. Far from it. There’s always a thousand things to do, in the evening, at work, and especially at home. I need a week off to get everything sorted.

It’s strange to be on my own again, which sounds crazy coming from a person who has done just that for most of my adult life. I am only about a 20 minute walk (or five minute drive) from Tom, and my sisters are short(ish) drives away, but when I come home, it’s just me. No Molly. No Maggie, or Stella, or Wanda. I might have to cat up. It’s awfully quiet.

I am looking forward to some actual leisure time that’s not about opening boxes or frowning at the visible consequences of my acquisitive book habits. Wandering in the neighbourhood. Walking instead of driving to stores. Walking to Tom’s. Walking in the river valley. Discovering new routes and pathways. Being in nature every day. Watching the river. Watching the seasons. Ending my work days in the woods, not underground waiting for the train.

Of course, there have been hundreds of walks since I moved in with my sister, and many of them have been in the company of either Maggie, or Stella, which has been a wonderful gift. I’ve learned the intricacies and intimacies of Whitemud Ravine, a total joy. And even with Tom, I’ve “discovered” the beautiful trails in and around Glenora. What I haven’t done, and what I’ve missed terribly, is my commute at the end of the day, on foot. It’s taken a big toll on my life, mentally and physically. Yeah, I periodically managed to find a way, but nothing sustainable over six years.

Oliver is my doorway back into the thing that dramatically changed my life for the better almost 25 years ago. Walking.