I’m off for a week, so lots of Stella walks and yesterday, a walk with Tom in Mill Creek Ravine, sans Stella. It just wasn’t possible. We always stop at Route 99 for a late lunch, and I suppose Stella could have stayed outside, but she wouldn’t have liked that, and neither would I. She’s a people person. Not quite as much as Maggie, but in the same territory.

It was, as always, spectacular in my favourite creek. The day started off with a mix of cloud and fog, but by noon the blue had asserted dominance. With all the rain, the ravine was damp, the water was deep, and the foliage was lush and green. I am very aware that yellow leaves and autumnal temperatures are just around the corner, so I’m trying to appreciate every green second of summer.

Came across a nice piece of graffiti of a skull on a blue background. Upon closer inspection, in the eye sockets, a pair of googly eyes!! Not sure if the artist put them there, or if the graffiti was vandalized, if that’s possible. It made my day, more than it was already made by being in the ravine.

Sudden, and rather odd graffiti of a skull (although I like the blue) 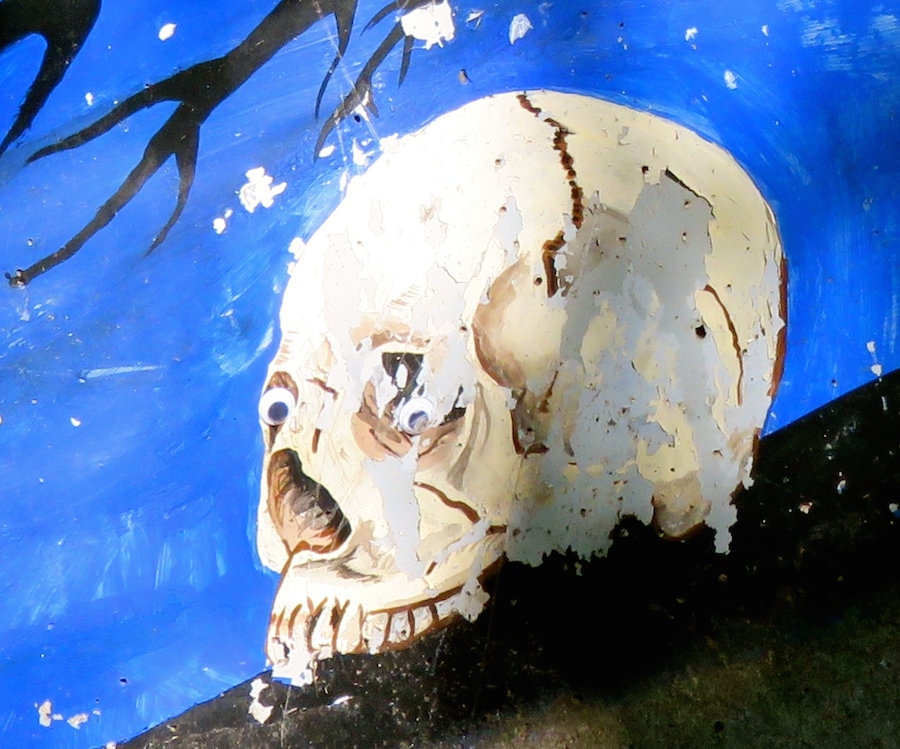 Detail of skull, with googly eyes

There were lots of people in the ravine, probably avoiding the promised heat of the afternoon. I don’t want this week to end. I don’t want summer to end.

Yeah, it’s a manhole, but the grass was so inviting…

This morning (Wednesday), I took Stella to Whitemud Ravine via Aspen Gardens, and like Mill Creek, it was ludicrously lush. The only drawback with Stella is that sometimes I have to carry the gob-soaked ball. Most of the time, she carries it, but not always, especially when it’s covered in spit and dirt. And she loves her ball so NOT bringing it is out of the question, at least according to her.