Just what you think it is….

Where’d I go yesterday? Oh yeah, Whitemud Ravine. The warm weather has returned, so I headed into the woods via the Aspen Gardens entrance. It was an unremarkable remarkable walk, with one exception – everywhere I went, I was preceded by shit. In spite of all the dogs who frequent the ravine, there is very little poop on the trails. And this stuff was fresh. And it wasn’t dog. I think it was coyote, which is a type of dog, but this shit was not like what I routinely collect out of Maggie’s ass, and it was full of berries. Deer don’t poop like that. And there was A LOT of it. Gotta be coyote, or more likely, coyotes. I must have passed 15 little presents on the trail, the multii-coloured berries still whole and glistening in the sun. In another context, these delicately tumbling piles could have been waffle toppings.

Just what you think it is…in context

The weird thing is that they were on the trails at all. Coyotes don’t like to make their presence known…usually, so I’m surprised they were loping about in the open. Not just the gravel trails either. I saw piles on the upper paved paths as well. And why was there so much? I will probably never know the answer to this question, so I will have to be content with the fact that even though Maggie was not with me…I was still walking with dogs. I also saw a few pileated woodpeckers, but they were not as fascinating as the shit. (Sorry guys.) Addendum: the nice folks (or folk) at the Edmonton Urban Coyote Project said the following about the, well…you know: “Fruit is a very common food for coyotes and is really obvious in their scat. Coyotes will actually preferentially leave scat in really obvious places on trails to mark their territory (as opposed to dogs, who usually go off to the side).” So, coyote. Confirmed.

Today, I had lunch at the university, and then walked down Saskatchewan Drive to north Mill Creek Ravine. I’d heard there was a lynx sighting (I think it was bobcat), and I wanted to investigate. I didn’t see any cats, but I was attacked by wasps. They’re really aggressive little buggers at the moment, or maybe I just smell like garbage.

I decided to walk on the lower path, which I haven’t done for more than a year. Back when I was ‘discovering’ Mill Creek Ravine, I used to take this path all the time – not having yet branched out to the other paths. After awhile, I rotated between the lower trail, the middle paved path, and the upper path, which I still prefer. The lower trail is much as I remembered it, except the far north end near Connor’s Hill. The area around the bridge is completely flooded, in spite of the lack of rain. Looks relatively recent – the signs are still up, but like every other sign in the river valley, I ignored it. The ground still had moisture in it, but the mud wasn’t wet, just very rutted. The lower branches on either side of the trail were covered in mud, and there was a giant dam of branches and other ravine detritus near the outtake tunnel (or whatever the thing is that takes Mill Creek to the river). Another mystery.

Further up the trail, one more mystery. The steep, foliage-less hill that kids used to bike down has filled in, although the narrow trail is still visible. The ground opposite, which used to be just grass, has also grown over. Where there was no bush, there is now bush. This has to be intentional. That hill is very dangerous. My orifices (all of them) used to clench when I saw some kid at the top of the hill on his bike, the ubiquitous summer gaggle of boys below, egging him on.

Two walks, two days, each with ome inexplicable factor thrown in. The rest of today’s walk was memorable only because the sun was so hot, but I did notice that the river has turned a deep, deep turquoise, as it is want to do in late summer. It was really beautiful. 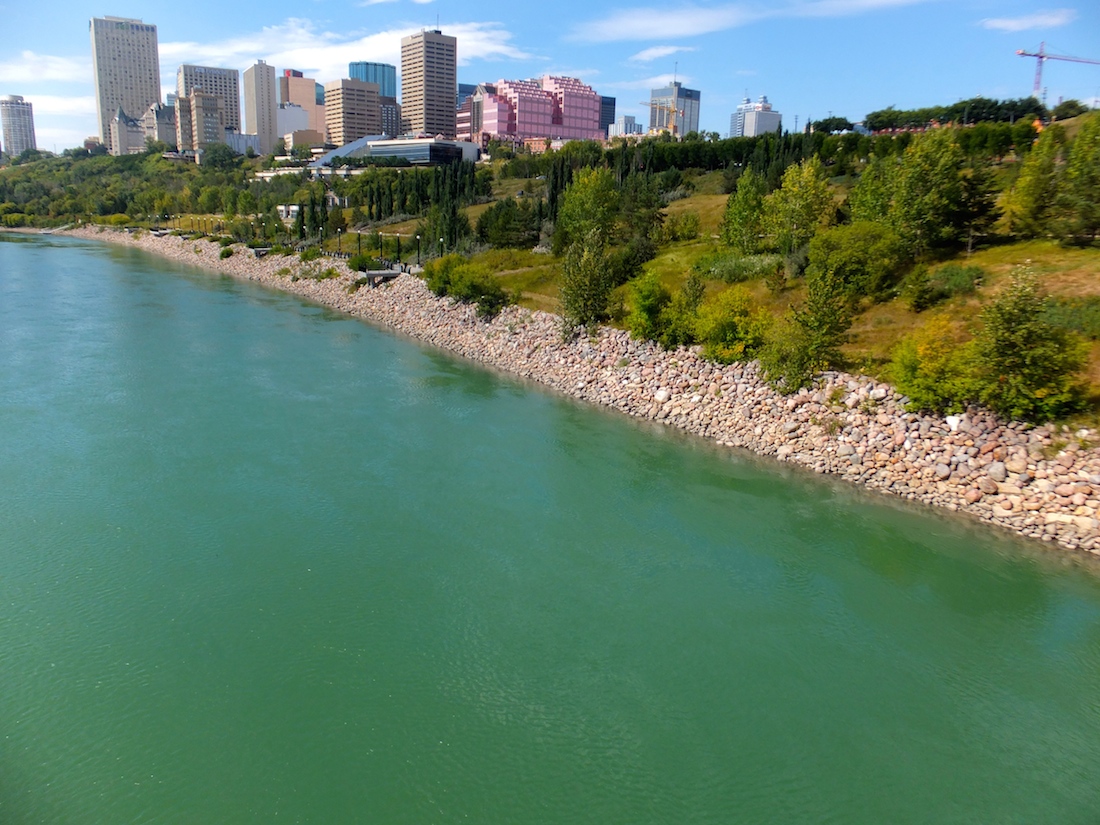