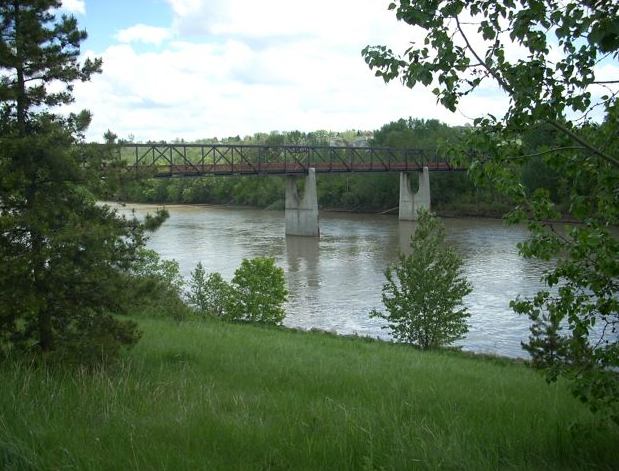 It fills me with rage, but there is nothing I can do about it. As Tracy Morgan (30 Rock) says-it’s happening people. The beautiful Cloverdale pedestrian bridge over the North Saskatchewan River is going to be destroyed to make way for a newer bridge which will accommodate the southeast line of the LRT. After many information sessions, I am still not convinced that cutting through the river valley is the most expedient and least expensive route for the train. I have written about this at length in OTHER POSTS, so I’ll refrain from further kicks to this dying horse, but I refuse to get on board with the project, or the City’s disingenuous efforts to ‘include’ the public in their decision-making process.

In the Edmonton Journal article on June 1, Elise Stolte presented the Transportation Department’s design ideas for the new bridge, under the heading ‘What Do You Think?’ I think it doesn’t matter what I think, or anyone thinks, especially the people who use that bridge, and the river valley trail system (the so-called ‘gem’ of the city) every day.

“The transportation department released images of six possible bridge structures prepared by consultants. They are not holding a competition. They will pick one option as a final recommendation to city council. That decision will be made by balancing the capital costs, expected ongoing maintenance costs and public opinion.”

When I say ‘beautiful’, it’s not that the existing bridge itself is beautiful, although it is designed in such a way to allow the maximum appreciation of the beauty that surrounds it. It’s a pedestrian bridge, so depending on the time of day, and season, it’s wooden boards squeak with a continual procession of walkers, runners, bikers, Sunday strollers, musicians, geese, and very often, visitors taking photos of themselves and the gorgeous Edmonton vistas this bridge affords. The bridge is part of a trail system that inconspicuously and rather serenely connects the lovely Louise McKinney Park to the southern side of the river. The LRT expansion in to the river valley will exact a terrible toll on this area, and the adjoining Henrietta Muir Park, the Muttart Conservatory grounds, the Edmonton Ski club, and Connor’s Hill-which runs parallel to the bucolic Mill Creek Ravine.

Who cares what the bridge looks like? Based on past history, it will be functional but ugly, and even more intrusive than the current LRT bridge extending from just below the High Level Bridge to the University. Maybe it’s not anger I feel. Maybe it’s sadness. Something near and dear is about to be harmed. Irreversibly.