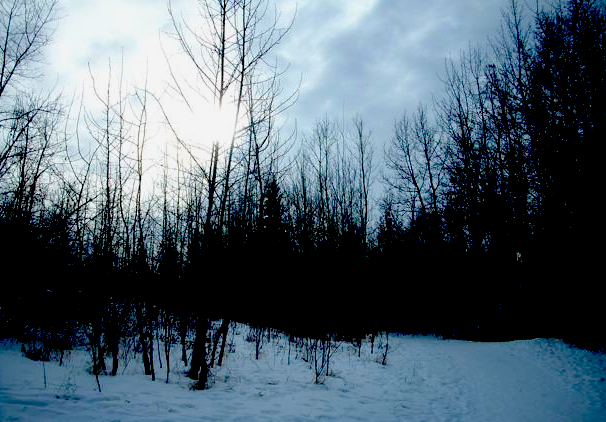 What a grim day. Maybe it’s because I’m dog-sitting for a sister who is visiting another sister who is temporarily basking in the warm sun of Scottsdale, Arizona for the winter months. Maybe it’s because the snow keeps falling, and the skies have been cut-wrist grey for days and days. Maybe it’s because it’s close to zero, but the wind is bitterly cold and bites right through my gloves. Didn’t walk to work this morning, because I thought it was supposed to snow, and so I grabbed a few extra minutes of sleep. Turns out, the morning was a window of loveliness that I spent on a bus. Enough time to take the dog around the block, not enough time to change my plans and head for the trails. After a traumatically stressful day in the cubicle, the snow was falling like rain so I took the bus again. Walked from the Low Level Bridge through a white field to Rossdale, the snow pelting my eyes, the entire landscape and most of my brain bleached of colour. Wrapped the dog in plaid and stepped out the door to the same white field, a pocket of blue bags fluttering in the wind. Hardly made it across the street before the dog, shaking in spite of his coat, demanded that we turn around, and quickly, his daily ablutions complete. When I removed his coat, I gave him a hug, his fat-starved body warmer than a March sun.

Winter is too long in this city. It doesn’t matter that it’s been uncharacteristically warm, we’ve still had months of ice, scarves, and cold fingers. Our shoulders still brace against the wind, and it will be months before a single blade of grass synthesizes a molecule of light into green.

I don’t think my daily overdose of vitamin D is working anymore, but the cheez whiz is tasty and the pastel covered chocolate plentiful.

I hope the sky is blue tomorrow.

Just checked a few posts from last March. Seems the weather, and my response to it, are remarkably similar year to year.