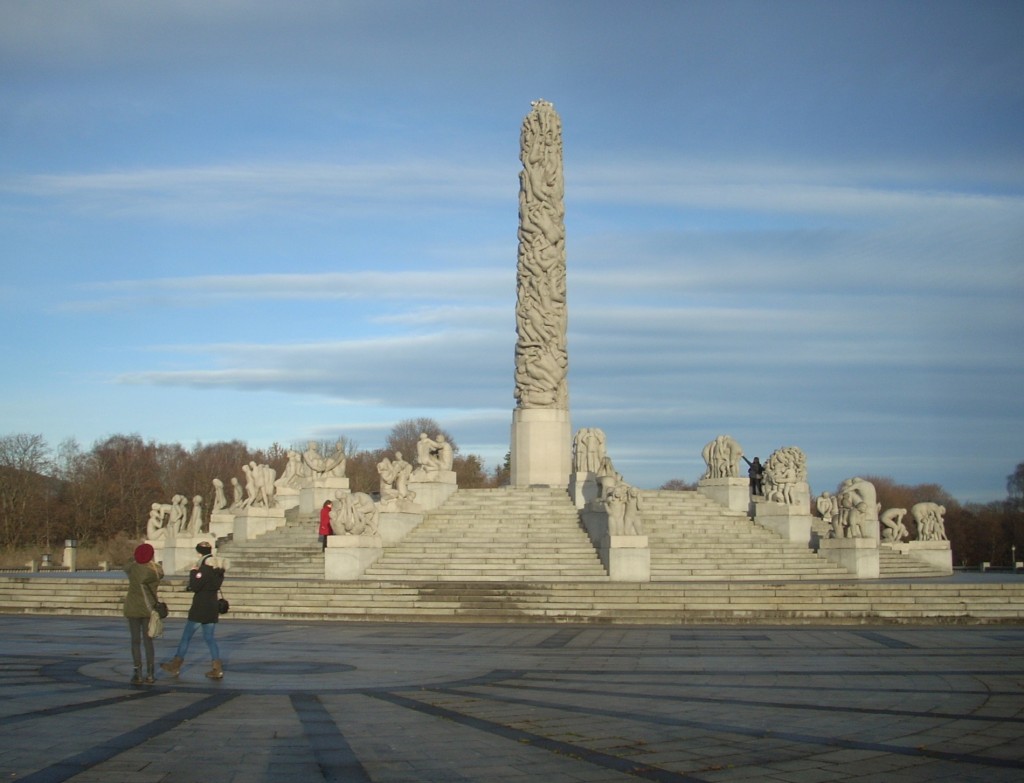 Well, that one’s off my list. I’ve always wanted to visit Norway. As a connoisseur of Expressionism, one must pay homage to the painter who brought the angst to the canvas-Edvard Munch. This is a man who has had a lot of influence in my painterly life, and in some ways, my writerly one as well. I’m working on a short story about the theft of The Scream and when I workshopped it, the main criticism was locational. Now that I’ve been to the Munch Museum, which by the way DID NOT have The Scream, or any other finished Munch paintings, I have no excuse for sloppy setting details. More Munch later… 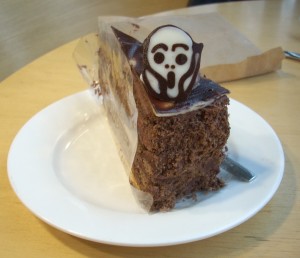 We took the four hour bus ride to Oslo on Wednesday morning. Pretty awesome bus, by the way. Nicer than the train. When we arrived, we exited the station in the wrong direction. Cranes and what appeared to be an interchange under construction. Walked half way over a really cool bridge, and then turned back, and I have to say, my first impression of Oslo was not good. The station appeared to be located in a slum. Lots of graffiti, run-down, boarded up buildings, and very few people, which is extremely unusual for the Scandinavian cities I’ve visited thus far. Of those who were out and about, most were young men, and a few women, most of whom wore veils and scarves. Food signs advertising kebabs. A mosque. This is Oslo? Felt like we had walked into a ‘situation.’ The lack of people around was quite eerie, and the grey skies and light rain didn’t help. Couldn’t check into our hotel for several hours, so we made our way through the streets to the Munch Museum. The museum is located beside a big park, and is quite modern, not like the crumbly old buildings housing most of the other art collections I’ve seen in Gothenburg and Stockholm. Tons of security. Had to take off our purses, and remove all metal objects. Once again, my leather shoes set off the machine. I was kind of surprised by all the to-do and then I remembered, oh yeah, they’ve been robbed multiple times.

Anyway, the first gallery had Munch’s sketches and preliminary paintings for the ‘Munch Laboratorium: The Path to the Aula.” This was a competition for the centennial celebration of Oslo University (Aula) in 1915, which included a festival hall with monumental decorations and paintings. They were interesting, and even in his sketches, Munch was Munch, with the curvy lines and crazed expressions. However, when we asked about another floor, or gallery, we discovered that this was essentially it, and that The Scream and many of his ‘famous’ paintings were in the National Museum, our next stop. Fine. We bought a shitload of stuff from the shop, or I did, and had a bit of cake at the cafe. The cake had The Scream on the icing. Heh.

The streets leading toward the National Gallery got a bit nicer. A few more people, but still strangely deserted. The flags on the old gallery were advertising a show of Giacometti, Hodler, and Klee. Whaaattt? Could this get any better? Huge fan of Hodler, and the other two. We saw this show first. Much to my delight, I was treated to a couple of huge canvases by Arnold Bocklin, another painter I love, and then up the marble staircase to the 19th Century. 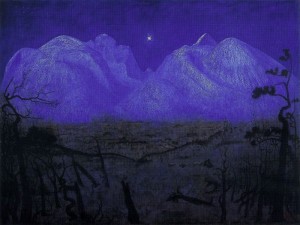 Harald Sohlberg-Winter Night in the Mountains

As I’ve come to expect, there were many little galleries, the ubiquitous mass of school children being lectured by a tour guide, and that weird sort of anxiousness I feel in galleries like this…afraid I might miss something, and yet overwhelmed by all the beauty. Found my beloved Caspar David Friedrich in a room dedicated to the Romanticist landscapes. Just a few canvases; they seem to prefer Dahl. Harald Sohlberg’s paintings were achingly gorgeous. I was very impressed with his blues. And then Munch. A room of bloody reds, haunted faces, and predatory moons. Just like home. Unbelievable. Am I really here?

Of all the galleries and museums I’ve seen, the National Museum of Art in Oslo was my favourite. I’m such a huge fan of 19th century art, especially of the northern, Romanticist variety, and this gallery was full of things to love. There were other artists, but by the time I finished with Munch, I was almost overwhelmed, and could barely see the other paintings. Blinded by beauty, I guess.

After this, we found our hotel and chilled for an hour or two. In the evening, walking around the area, we found the people. Seems they were hiding, and the next day, the sun came out and we discovered Oslo anew. It is a beautiful city after all, with that same sort of Gamla Stan architecture, although smaller, and more subdued, like Gothenburg. 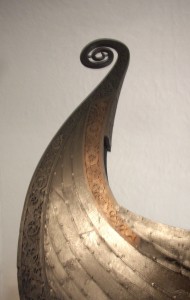 Took a bus to Bygdøy (pronounced Big Day) and visited the Fram Museum, the ship that sailed to both the north and south poles. Read some interesting stuff about Nansen, who is a national hero in Norway, but I confess I’ve never heard of him. We went to this museum because a friend of Sharon’s is a distant relation to Admundsen, the arctic explorer also featured in the museum. We then walked up to the Viking Ship Museum, which has two full ships and a frame of a third. Very graceful, beautiful designs, and the artifacts found with the ships were incredible, some of which I’ve seen on the covers of books about Vikings.

The last excursion of the day was to Vigeland Park, the biggest park in in the world devoted to the sculptures of one artist. Unfuckingbelievable. So gorgeous. As far as sculptures are concerned, I prefer a Giacometti over a Vigeland, but it was really something to see so many monumental sculptures of human figures in one place, often atop one another. So many naked bums, so many schlongs. Many different kinds of groupings, ages, poses, most sculpted in granite, I think. The main sculpture is an obelisk, a kind of human totem pole, or a big 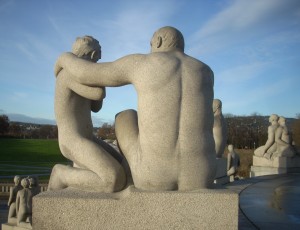 Son, have you seen my pants? 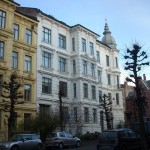 on the way to central station

We were both dog-tired by this time, so we headed over to Central Station to wait for the bus. The walk down to the station was gorgeous. Lots of embassies and lovely, old mansions. Found another Christmas market in the square. Spent a few hours drinking a variety of caffeinated beverages at the station and then headed home in the dark. Must say, it gets dark early here, and in Gothenburg. I guess that’s to be expected.

When we arrived around 10:00 in the evening, it was heavily misting outside. My last big adventure in Scandinavia. This morning, we went to the market to buy some more swaddled bread, and my last Kanelbullar. Tomorrow, planes, trains and automobiles. By the way, it’s raining sideways today, and yet the Swedes still look beautiful. What the fuck?