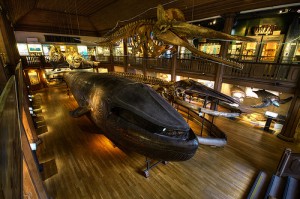 It's real, and it's spectacular (ly sticky)

I touched the mighty, wet whale today. In the Goteborg Naturhistorika Museum. Sharon had mentioned this earlier during one of her skype calls. On a previous visit to the museum, she had seen the Malm Whale, the only stuffed blue whale in the world…and touched it, as one would. The skin of the whale was sticky, and fragrant (not in a good way), onacounta being a 100 year old giant, stuffed tuna. It was really rather impressive. No other way to truly understand the size of a whale than to see a stuffed one, or perhaps swim with one, which I’m not about to do, as most things in the ocean disgust me. The bones of the whale are hung above the not so plush version below. Not crazy about taxidermy, but it was fascinating to see the ‘Gothenburg Leviathan.’ I touched it too (couldn’t resist) but not the slimy parts. Lots of rivets in that thing. Apparently the jaw unhinges and people can go inside on ‘special occasions’ like Christmas and, every four years, Election Day, also known as Valdagen, or Whale Day. It used to be open all the time until the turn of the last century, when a couple was caught in a ‘compromising position’ inside the whale. The ‘mouth of sin’ was closed until 1939, when it was reopened for as a fundraiser. I shit you not. 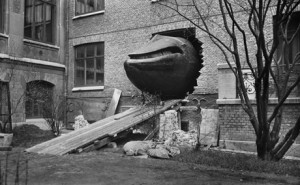 The rest of the museum was kind of haphazard. Dioramas with unlikely parings of animals, including a reindeer and a camel. I had to ask my sister, “Is a camel a deer?” Nope. Not sure why they were keeping company. There were a few of those Victorian naturalist cabinets, which are always fascinating in a creepy/beautiful sort of way. Also, a two-headed baby in a jar. Full-term. Again, I shit you not. We actually doubled back so that Sharon could take a photo. “The kids will like this,” she said.

Kind of a quiet day. Ventured into an English bookstore and bought a few things. Also, yet another Swedish bookstore (there are lots) and found “Sagan Om Den Lilla Farbrorn” or the Tale of the Little Uncle. (Better than Tale of the Funny Uncle….an entirely different genre.) Very sweet. The illustrations are beautiful, no translation required.

Friday, all three of us are going to Liseberg, an amusement park that has been pimped up for Christmas. It’s a huge event, and a famous Christmas market, apparently. Can’t wait. And then Stockholm on the weekend.