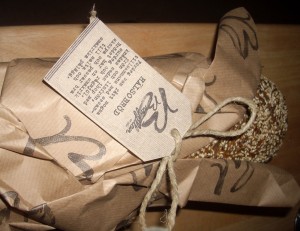 There are few things in life I love more than bread. Walking through the main market (Saluhallen at Kungstorget ) today, which is reminiscent of Granville Island, we came across a bakery stand, with the most amazing assortment of breads. The one I bought came swaddled in paper, wrapped in twine. It was a beautiful thing, and the seedy, dark bread was incredibly tasty. Especially when slathered in butter, which we think has some magic ingredient because although it tastes like butter, it’s also deliciously sweet. Yum. 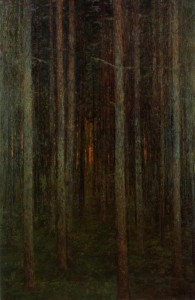 The Forest...up close and personal

Walked to the Goteborg Konstmuseum (Gothenburg Art Museum) today and saw some lovely paintings. The sixth floor has the 19th century stuff, so the bulk of my sucking wind happened on that floor. And I did suck wind. Awesome painting by Prince Eugen entitled The Forest, which I’ve seen in books but have now seen in person. It’s extraordinary. Also lots of Carl Larsson and other Scandinavian artists. The lower floors had some interesting paintings, but nothing as cool as The Forest.

After some hot soup, off to the Goteborg Stadsmuseum  (Gothenburg City Museum) to look at some Viking artifacts. I guess I’ve forgiven them for invading England. After all, if it wasn’t for the Vikings, we wouldn’t have the word thing, and thing is one of my favourite words. They have the remnants of an old Viking ship in the main hall, but mostly just planks. The rusted swords and bits of jewelery were more interesting. Also enjoyed the 1000AD era, with the the wooden religious icons. All elongated faces, along the lines of the Bayeux Tapestry. Cool. 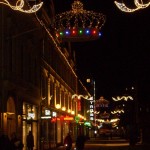 After that, a walk to the harbour and then home. Later in the evening, we walked through downtown to a Hemkop, which is like a small Safeway, for some victuals. The streets are lit for Christmas, and the lights are quite unsual. I imagine this city is very pretty in the snow, but I am happy to avoid it for as long as possible. Looks like there’s plenty back home…