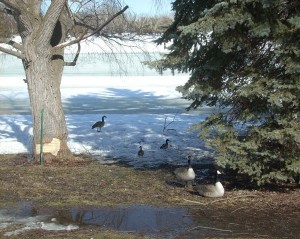 Dumb decision. During the spring thaw, stay away from dog parks, and parks in general. It can be a bit sloppy, and in a dog park, it’s hard to say what actually constitutes the slop. Nevertheless, I hoped to see a gaggle of gooseflesh, and I was not disappointed. Laurier was perhaps not the best way to get to Hawrelak, but once you’re wet, you’re wet, and there’s nothing left to do but enjoy the geese. I’m not so sure they were enjoying themselves, as there was a lot of goose to goose honking, but some kind soul had sprinkled seed on the snow, so at least they had something to eat between the fights. There was some duckage as well, and gulls. A large number of people too, just out for a walk, or driving around the park. It was a really lovely day.

Too early to hit the Emily Murphy trail, so walked up the hill beside Hawrelak to the University, and then down Saskatchewan Drive. I really wanna toss my boots and get back into my running shoes, but the trails are still too mucky, and most are still snow-covered. Maybe in a week, or two.