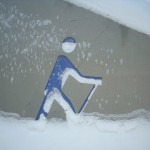 Now that the sun is setting at 4:53 PM, I have a few of the shorter river valley routes back, including Skunk Hollow and Rossdale, but only just. Still pretty dim at the end. By February, I should be able to take some of the longer routes. Unbelievably, it snowed yet again this morning, but by the time I left work 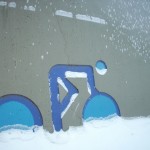 Is that a ten-speed? Nerd.

it stopped, leaving overcast skies and about 2 cm of snow on the unplowed trails.

Walked through the Kinsmen and then under the Walterdale Bridge. Turns out, even the trail icons were not spared a face full of the white stuff. I almost felt sorry for them, especially the biker. Doesn’t look like he was dressed for it.