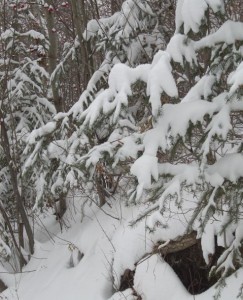 Friday in the Park with Donna

Ahhh…gotta love office Christmas parties. Especially lunch-time Christmas parties. Especially lunch-time Christmas parties where everyone gets to go home after all the gifts have been exchanged (or stolen, depending on the game), and the last email has been ignored. My work day ended just after 2:00 PM, which means, of course, a rare winter walk in the river valley on a weekday. It’s been so busy lately, it was a thrill to do something other than stare at a computer while the snowflakes beckoned outside the window on a not-too cold and entirely walkable day. Weeks, I think, since I’ve taken myself for a long walk. Popular opinion was that I was getting awfully antsy (bitchy.)

The sky was overcast, but the snow was gentle and soft; an afternoon begging to be photographed, in other words. However, my camera froze solid after about 15 minutes. I was wearing so many layers (fleece and bear grease), it was hard to accurately gauge the temperature. And I kept hearing shovels, but it was just the hat-muffled sound of my arms swinging against my parka. Could’ve sworn I was being followed.

After a sprint through the woods near the University, I headed over to the extremely picturesque (though christly 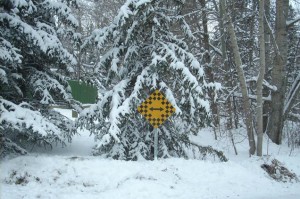 expensive) neighbourhood of Rossdale to check out the decorations. One house in particular is always worth a look this time of year because of the huge coloured balls hanging from the mountain ash tree. It’s beautiful, and unsual, especially today with the little caps of snow topping the ornaments. And then, over to my neglected little parkette, Louise McKinney. Nothing much going on there, other than more snow, so continued over to Mill Creek. It was pretty quiet everywhere, actually, other than my ever-present shovelers. No other walkers. Not even a dog. The unpaved trail I usually walk was almost unpassable. So much snow (20+ cm) over the last week, it was a bit of a slog. A lovely slog, but a slog nonetheless. Some girl ran by me on snowshoes. Snowshoe people are such show-offs.

It was dim by the time I exited the ravine, about two hours after I left work. That’s about one hour, 35 minutes longer than each of the previous week’s walks. I feel so smug. Bring on the Turtles.