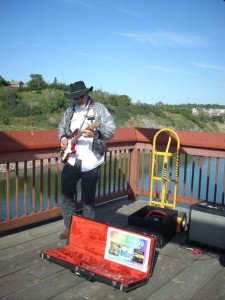 Just on the other side of the Low Level Bridge, the east side, I heard the sound of an electric guitar in the distance. As I got closer, I realized it was coming from the Cloverdale Pedestrian Bridge. A guy in a mesmerizing silver sequined jacket playing blues guitar across the North Saskatchewan River.

It was a lovely thing hearing Brian Gregg‘s music wafting throughout the river valley.

It’s the bridge. That bridge. Connected to that park. It attracts all sorts of wonderful things. I have stated many times how much Louise McKinney Park and the Cloverdale Pedestrian Bridge mean to me, and to thousands of others who wander along it’s paths everyday. How the park’s eastern edge (with the rose garden), and the bridge will be gouged and destroyed to make way for the southeast expansion of the LRT. How the bridge is actually one of three that will be obliterated, along with the 98th Avenue and Connor’s Hill pedestrian bridges. And what about the destruction to the Muttart grounds, and to Henrietta Muir Park on the south side of the river? It’s just too sad to think about.

But…while we still have the park, and this amazing bridge, it is truly something to be celebrated. And a blues player with an electric guitar on a hot summer’s day is just the guy to do it.

Thanks sparkling dude, you made my day.