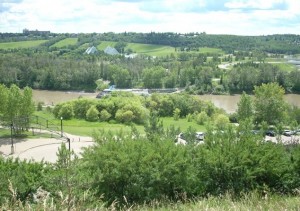 As I was shuffling through a pile of newspaper clippings this morning, I ran across a review of Latitude 53’s most recent exhibit, the National Portrait Gallery. Final day, July 17th. Today. Damn! Having sketched a few faces in my time, and being a fan of good, especially humourous portraiture, I didn’t wanna miss this one. Also, the show was inspired by Edmonton’s failed (ignored) bid to locate the actual National Portrait Gallery in our city, and I’m always interested in creative ‘fuck-you’s’, regardless of the medium.

Latitude 53 is located downtown on 106th street, so it was easy to include a visit as part of my walk. Started at Skunk Hollow, over to the Kinsmen, across the LRT bridge, and then up the stairs to Ezio Faraone Park. Managed to half-run, half-walk the stairs, with only some minor heaving. Nice to see the Legislature grounds have just as many people wandering about on a Saturday as during a weekday. Passed by several ice cream stands. Why don’t I bring change with me? Another creamsicle not eaten.

The gallery was empty except for the receptionist and me. Not a surprise. It’s the last day of the show, and there are mimes in Churchill Square.

The first thing I saw was Trevor Anderson’s documentary Absent Friends about the High Level Bridge. I thought it was terrific! Only a few minutes long, and filmed in a kind of grainy, wintry black & white, it conveys not only the strange history of the bridge, but also it’s reputation (well-deserved) as the premiere place to commit suicide in Edmonton. Funny, West Edmonton Mall has always struck me as the epicentre of despair in our city, but apparently the bridge holds that ‘honour.’ (I too have had a few troubling thoughts on the High Level Bridge at various times in the past, but I’ve decided to wait for the Rapture.) The gravity of Anderson’s short film is so over the top in places, I had to laugh. I think this might have been his intention, but who knows? The rest of the show was pretty interesting. I especially liked the painting by Anya Tonkonogy of Rich Trefry, and the unlikely needlepoint portraits by Megan Morman. Unfortunately, the show was teeny-tiny, and it would have been great to see more work. Glad I made it though…

After my little gallery sojourn, I continued my walk through downtown, passing by the very busy 104th Street Farmer’s Market, and then over to the Churchill Square where I watched a grimy looking clown chase a runaway balloon animal. A poodle, I think. Not sure if he was officially part of the Street Performer’s Festival. I’m guessing not.

Meandered my way through the crowds to Jasper Avenue, entering Louise McKinney Park a few blocks east of the Shaw Centre. As far as summer days are concerned, today was outstanding. A bit windy, but just windy enough to allow my skin to glow, rather than sweat. I was expecting another droughty summer, with crispy grass and a plague of grasshoppers, but the river valley is juicy with life, and a deep, deep emerald green. I guess I can stand a few more bad-hair days for the sake of some moisture in the soil. It’s the least I can do.