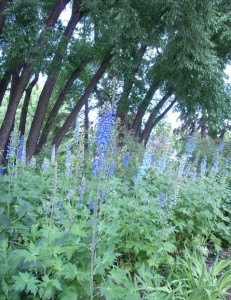 blue things by the Muttart

A walk that was like a swim. That’s how I would describe it. Not that it was too hot, but the temperature varied as if I were wading through a pool. At noon, when I left, it was predominately overcast, and the air was cool. The sun peaked out occasionally, warming my skin, but the heat didn’t really kick in until the second hour of my walk. And then it got wet. Humid.

In the deeper parts of the ravine, it was like wearing a sweaty handshake. Sometimes…humidity feels really good, like being part of the air itself; no separation between skin and the heat radiating all around. Other times, it feels like goo. Sticky, glompy, goo. But not today. And the last ten minutes of my walk, the sun slipped behind a cloud and a cool breeze dried up the parts of me that had melted.

On holidays again this week. Extended walks in the river valley, and hopefully some different paths to explore. A ‘staycation’, but by choice. I’m nothing if not self-amusing, especially in a pair of running shoes. I just wish the worms would f-off once and for all. They’ve lingered far too long this year, and even today I was dodging the little blighters in a previously uninfested part of the ravine. To a certain extent, it limits where I can walk, although there’s so much river valley, it’s not really an issue. Just an annoyance. And occasionally…an embarrassment, depending on my reaction.

Walked for two hours between north and south Mill Creek. There are many monkey paths calling to me from the main trails, so I’ve been taking little side-trips down river banks and up deeply foliated hills, which more often than not, lead to a street or a staircase. Occasionally, an entirely new trail is discovered. I’m like the David Thompson of the south Edmonton river valley trail system in that respect, but thus far, I’ve not been offered any naming rights to these areas. Therefore, until further notice, the trail I ‘discovered’ today shall be known as, ‘that path near the third slope with the two rocks lying next to a tree with that thing growing out of the side of it.‘ Boy, it was really something.