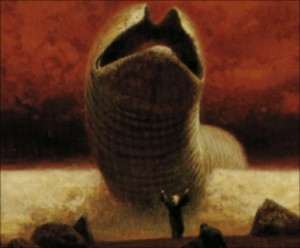 And now, a word about worms.

A few years ago, in a short piece for See Magazine, I compared my annual confrontation with the worm to the movie Dune:

“In late May, early June, when I’m walking through Rossdale, I think of Jurgen Prochnow as Duke Leto Atreides, scanning the sand dunes for killer worms and saying, “Worm-sign! Is that worm-sign?” Of course, he’s German so it’s more like “verm-zein” but each year in late spring I ask the same thing. It starts with one or two tiny green worms hanging from the trees canopying the otherwise beautiful path that runs along the North Saskatchewan River toward the Low Level Bridge. And once there is verm-zein…only a Level-5 contamination suit with helmet could get me to walk through there.”

I have alluded to the worms that are not worms but caterpillars in previous blog posts, but I have not elaborated on what they truly are, and the degree to which they disrupt my life and the lives of perfectly healthy trees in the river valley in June and July. I know them as worms, but they are in fact Larger Boxelder Leafroller Caterpillars. I have also heard them called Ash-leaf Cone Caterpillars. Whatever their true name, they are green, they hang from silk threads attached to trees in the river valley and they fill me with a fear normally reserved for actual threats to my life, like fire and calculus.

In a recent Edmonton Journal article, it was suggested that the five-year cycle of the leafroller caterpillar is nearing its end. However, the authority quoted in the article stated that the caterpillars appeared in the Rossdale area in 2005. I say unequivocally that the green devil was present earlier than this…at least as far back as 2003, although I do agree the infestation started (or was most noticeable) in the Rossdale area. I have been keeping a walking journal since 1996, and there is no mention of worms prior to 2003. 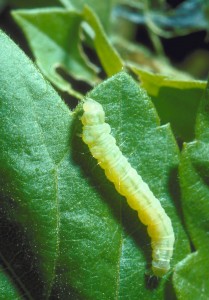 The caterpillar starts it’s cycle of horror by eating the leaf of an ash tree, or whatever comes to hand (or legs), and then it migrates on a silk string to another leaf. It rolls up that leaf and builds a cocoon. A few weeks later, a small, grey moth emerges. The part of the cycle that I’m least fond of is the migration stage. On several occasions, I have been in Rossdale when hundreds of worms were hanging from every tree along the path, as well as the trees and shrubs along the river. In the sunshine, they are easy to spot; the green is almost florescent. At these moments, the entire neighbourhood appears to be decorated with worms and in no way are these decorations ‘tasteful’ or ‘festive.’ The gruesome little trapeze artists swing down from the trees at staggered intervals, so it’s almost impossible to avoid them other than avoiding the trail altogether, which I try to do.

The infestation now extends from Devon to Fort Saskatchewan, but in most areas, the worms are a just a minor annoyance. It’s easy to dodge one or two hanging from a tree. However, it’s impossible to dodge a hundred. Or a thousand, at least without spastically throwing myself in the path of oncoming bikes, or having a sudden, stress-induced catastrophic brain hemorrhage. And while it appears that the caterpillars do not permanently damage the trees, they make them look like shit until the leaves have a chance to recover, usually sometime in August.

Last year, so much of the foliage along the river bank from Rossdale to 98 Street had turned crispy and brown, I was convinced the trees were ravaged beyond repair. However, some manner of late-season chlorophyllic sorcery unfurled the leaves and re-filled their veins with green blood, which was a slightly disappointing development in that if the caterpillars had actually killed the trees, maybe the city would spray. Not that I’m a fan of pesticides per se, but you know, it would free up an extra path or two in the river valley in the late spring/early summer. Three-eyed carp are still edible, right?

A few days ago I thought I’d take a chance and try the lower path on the east side of the Low Level Bridge. It was a risky move. This area is often heavily infested, but it was late June, and I foolishly assumed that the the fat caterpillars were close to rolling up for good. No such luck. Within seconds, the worms were dropping from the canopy as if they were expecting me. It’s a short distance from this part of the trail to the open area of Louise McKinney Park, but there is no point in running. I focussed my eyes straight ahead and dodged what I could. At the end of the path, I performed the dance of the recently incinerated, frantically patting and pulling at every inch of my body and head. No worms, but a considerable number of stares.

I suppose I could be mature about the caterpillars. What’s a worm or two in your hair? What possible harm could such a tiny, squirmy thing do? Rappel off your forehead in the middle of an intimate dinner with your new special friend? Settle in for the night and lay eggs? Really, it’s the bikers that have the most potential to suffer, as they obliviously ride the river valley trails with their mouths open just wide enough. And in a week or two, the worms will have metamorphosized into moths and the problem will cease to exist. Until next June.

3 replies on “The Green Devil”