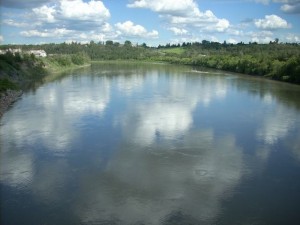 Well, I’ll be damned. Michael found a place for his Amusements! When I crossed Cloverdale Bridge today, I was greeted by the sight of a ferris wheel at Louise McKinney Park. A ferris fu*&ing wheel! Also, a mini version of the Scrambler (always my favourite ride), and all the usual accoutrements of a carnival: games of chance, bags of blue and pink cotton candy, and people wearing spandex (that shouldn’t.) On the upper tier of the park, there were performers on the stage. Judging by the flowers and dangling ribbons, I’d say some sort of Slavic deal. There were tents as well, the first one offering free Canada Day flags and pins. I pinned a small flag to my black tank top, feeling instantly patriotic. Unfortunately, I was almost the only one on the trails today not sporting a red piece of clothing. I don’t own a red piece of clothing. At least, not one that isn’t a sweater which I only wear on or near Christmas. Red is not my colour, but that doesn’t excuse the lack of patriotic clothing in my drawers. It was therefore fortuitous that I should stumble across a stand giving away Canadian flag pins on Canada Day, in a park which usually is stand-free, and almost always ferris wheel free.

The previous 90 minutes of my walk through Mill Creek were uneventful in comparison to Louise McKinney Park. I’m surprised it can accommodate such a thing as a small carnival, but that park is nothing if not absorbent to the whims of City Hall. At least the carnival is temporary. The LRT route is not. However, it’s Canada Day, and the clowns are out in full force!