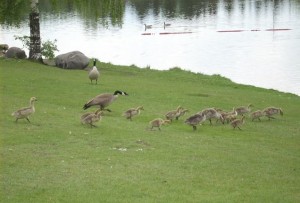 …in Hawrelak Park, with the exception of the geese. And the goslings. Many fuzzy goslings. The smaller they are, the more golden. The older ones are less fuzzilicious, and grayer, like their parents. Apparently, some geese are far more fertile than others, or perhaps Hawrelak has an extensive daycare program on site. One pair had about 20 goslings under their collective wings, all of whom were being ordered about by a fishwife of a mother goose, with the inevitable befuddled dad looking on from the sidelines. In the water! Out of the water! Down this way! No! Not that way, this way! It was very amusing, and kind of familiar.

At the north end of the park, there was a sudden invasion of angry protesters with placards and yelly voices. Hard to imagine what sort of support they hoped to acquire in an empty park on a cold day. (The geese were clearly busy.) As I got closer, I could see the signs had flowers and sparkles, and the whoops of righteous anger were actually whooping school children. The dead giveaway was the Panago Pizza truck parked by the shelter where the young rebel rousers were gathering. Real protesters don’t eat pizza; fair-trade trail mix is what soothes the civically unrested. 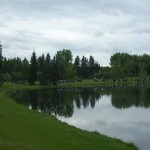 marching for a slice

Spent the early part of the afternoon at Hole’s Greenhouses drooling over containers of flowers that were so perfect and beautiful they seemed edible. Didn’t buy anything. Might get a frost tonight, and it would have looked pretty ridiculous hiking home with a potted begonia in my arms. Actually, I did buy a plaque with a sculpted bee on the surface.  I am very fond of bees, and the plaque fit nicely into my backpack. Tempted by the gargoyles but they didn’t seem quite as portable. Next time.

After several other visits in St Albert, got dropped off at Laurier…a very mucky Laurier, and then over to a wet Hawrelak. Still cold outside. The clouds are sodden and unsettled. But…no rain today. And no snow. On Saturday the snow came down so straight and fast it looked like it was being pulled to the ground by powerful magnets.

What a weird May.

According to Josh Klassen, coldest May since 1996. Twice as much precipitation as Jan thru April combined.