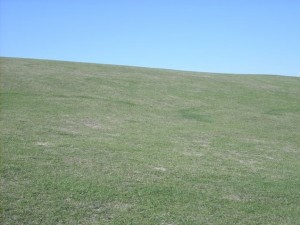 a perfect balance (by Muttart)

The first thing you notice is the green. Second, the smell. Third? There is no third, not just yet. Not until you’ve soaked in the verdant transformation of the landscape just days after a blanket of snow wrapped Edmonton in a frigid embrace. It’s like someone hit the refresh button. I would have preferred rain, but snow did the trick, and where would we be without a dump of the white stuff in May? Not at this latitude, certainly, and not with the same level of fatalism that is so uniquely Edmontonian when it comes to predicting (and complaining about) the last snow of the season.

I hit the trails early this morning. Just a few other joggers and me. Oh, and one guy looking for bottles. And some geese. Also, gardeners at the Muttart picking up perennials and topsoil. And some sort of Cub Scouts event. Funny, it seemed quieter than usual. Walked my favourite loop (about 90 minutes), through Mill Creek, Muttart, McKinney and then back again. It’s the M M & M route. Not to be confused with the M&M route (which makes the M M & M route an absolute necessity.) I always feel so smug when I walk in the morning.

No action in the frog bog yet. A few ducks but no froggies. Maybe I missed their annual ‘So You Think You Can Sing’ courtship competition. It is brief, but spectacular. Spectacularly weird.

Speaking of spectacular, after my walk I wandered over to the Strathcona Farmer’s Market to get my usual green things, and I ran into a mob of red things. Runners. Mostly men, in scarlet ball gowns and dresses, wigs, and sneakers. It was very impressive. Even more impressive than the skateboarding bulldog last week.

Kept bumping into them on my way home. Finally, one particularly fetching fellow in a deep-cut wraparound dress (with bonus chest hair) stopped and asked if I wanted to support their charity. Absofreakinglutely. These fussed up folks are members of the Edmonton Hash House Harriers, running for Camp Fyrefly, which is a camp for gay and lesbian youth. I last spotted them running amok down 99 St, soliciting drivers for donations. A sea of read satin gleaming in the sun. Simply delicious! Can’t think of a better use for a ball gown.