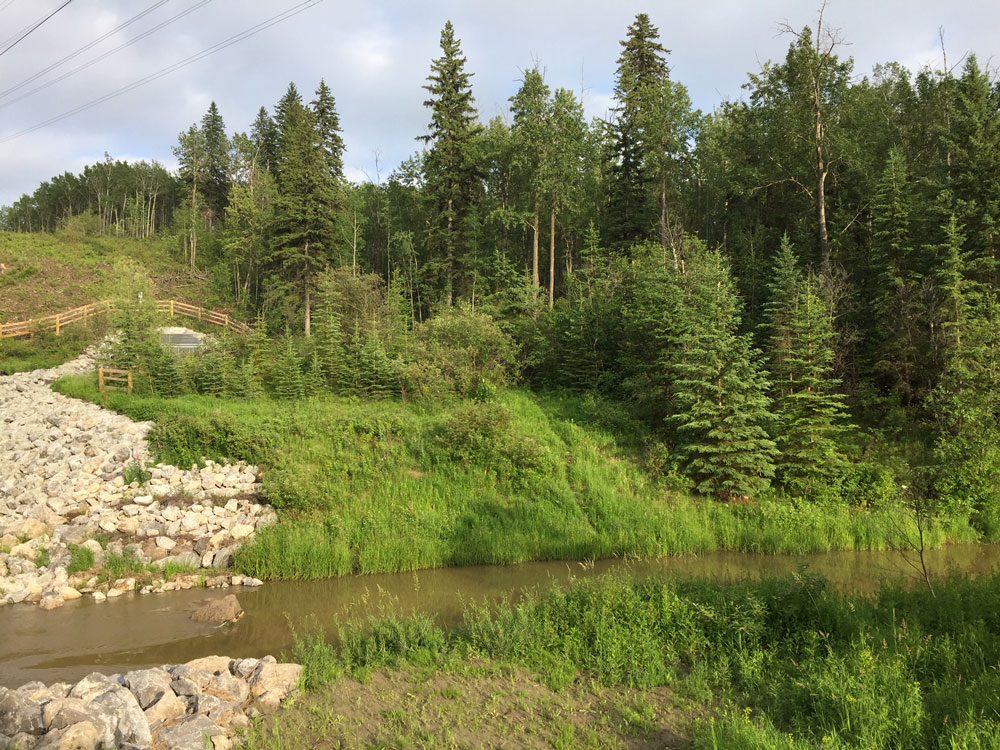 God knows I love a rainy day. If I am not at work, it’s like free time. I don’t feel pressured to do anything but read. And drink coffee. And listen to the lovely sound of raindrops on kittens, or something like that. But this is getting ridiculous. We’ve had so much rain from mid-June to now, mushrooms have become the official plant of Edmonton, and I swear some of them are becoming sentient.

According to local weatherologist Josh Classen this is only the second rainiest period (June 1-July 7) in the recent past at 138 mm of rain, and we’ve had more rain since he made that graphic. However, enough complaining. Yesterday evening (Wednesday), the clouds broke after an exceedingly gloomy day, and the sun and blue sky were like a spa day and jail break rolled into one. It was beautiful. 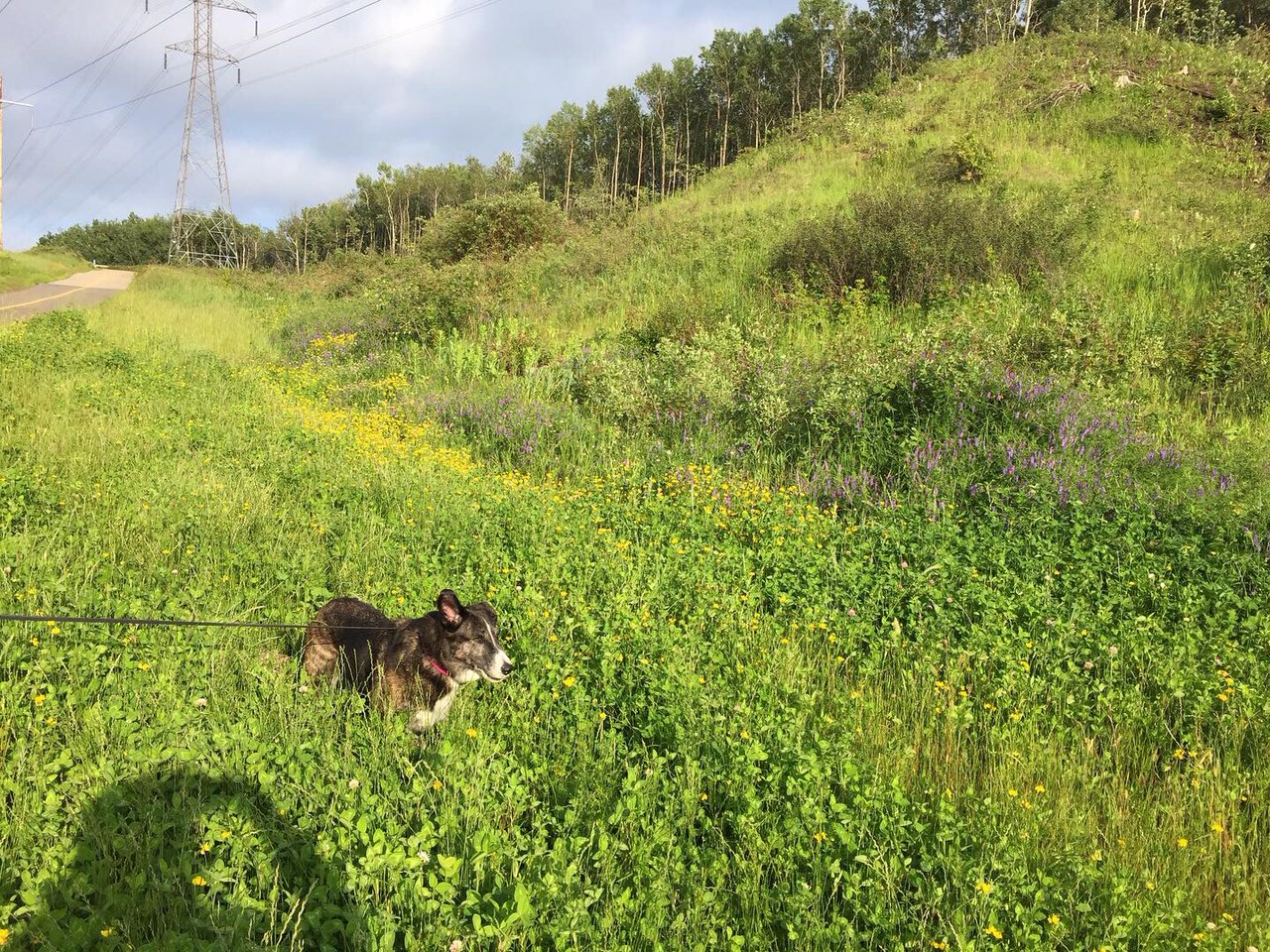 I drove over to Sharon’s for dinner, and a walk with Stella. We walked along the powerline and then into Whitemud Ravine. The creek, as expected, was very high and fast which made Stella even more nervous about crossing the wooden bridge, but she made it and we had a great time. She looked particularly lovely nosing about in the clover. 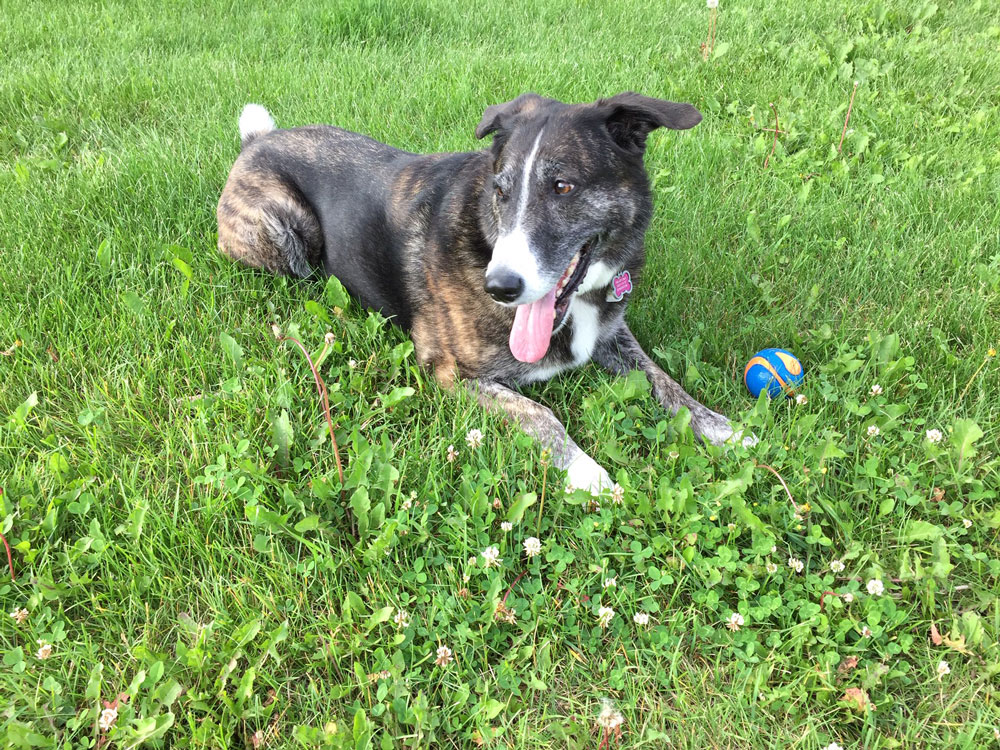 The good thing about the rain is the lushness of the foliage, and a reprieve from the always looming drought, but today it’s once again overcast and cool. Looking forward to my day off on Friday which is supposed to be sunny and warm. O Great Mushroom Lord of the Sky, let it be. 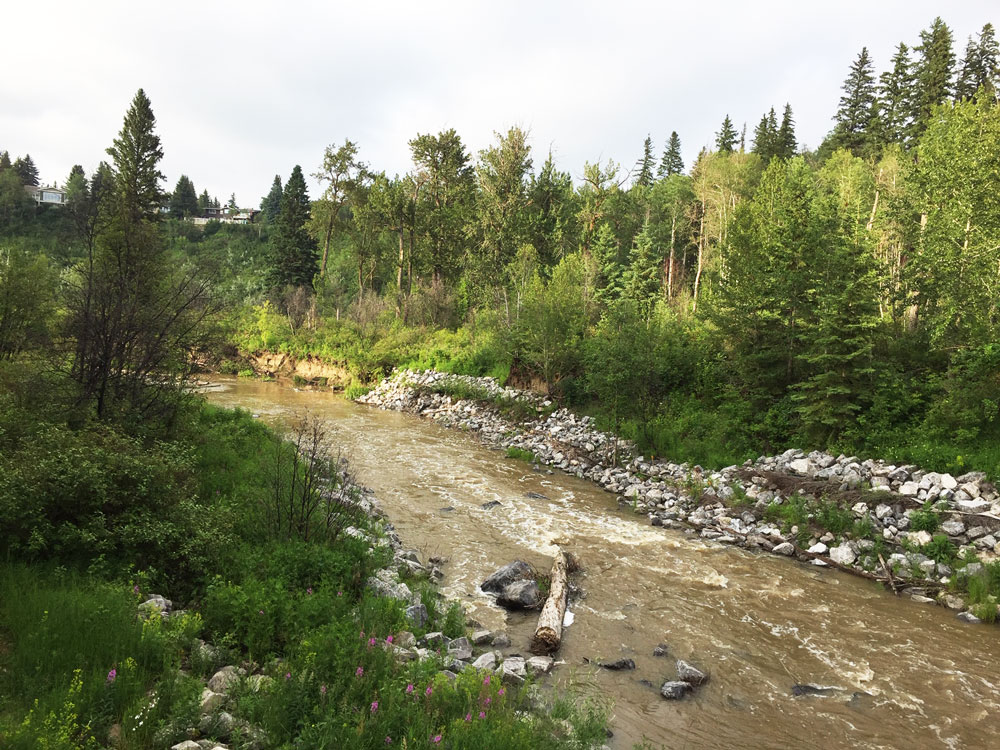 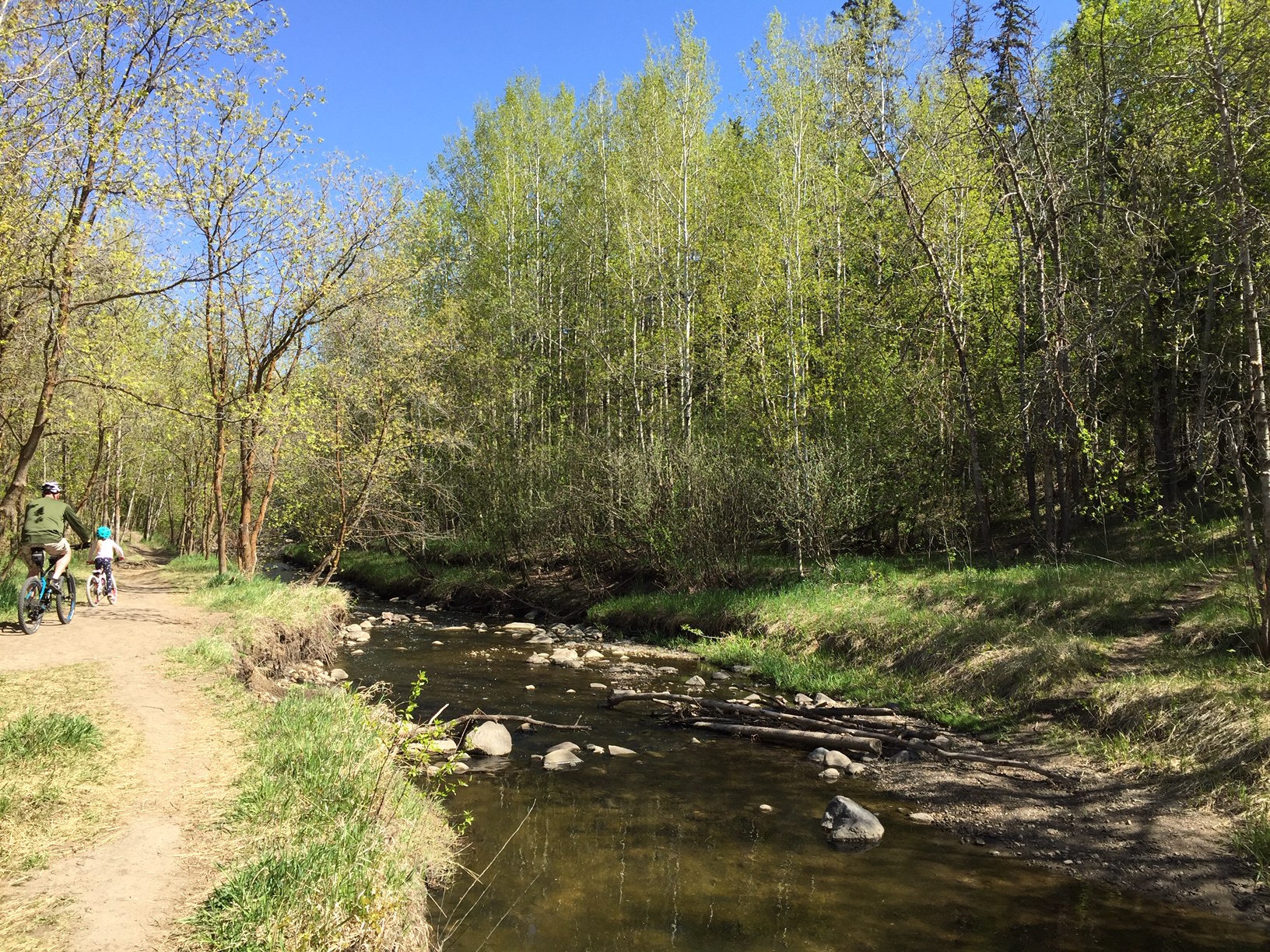 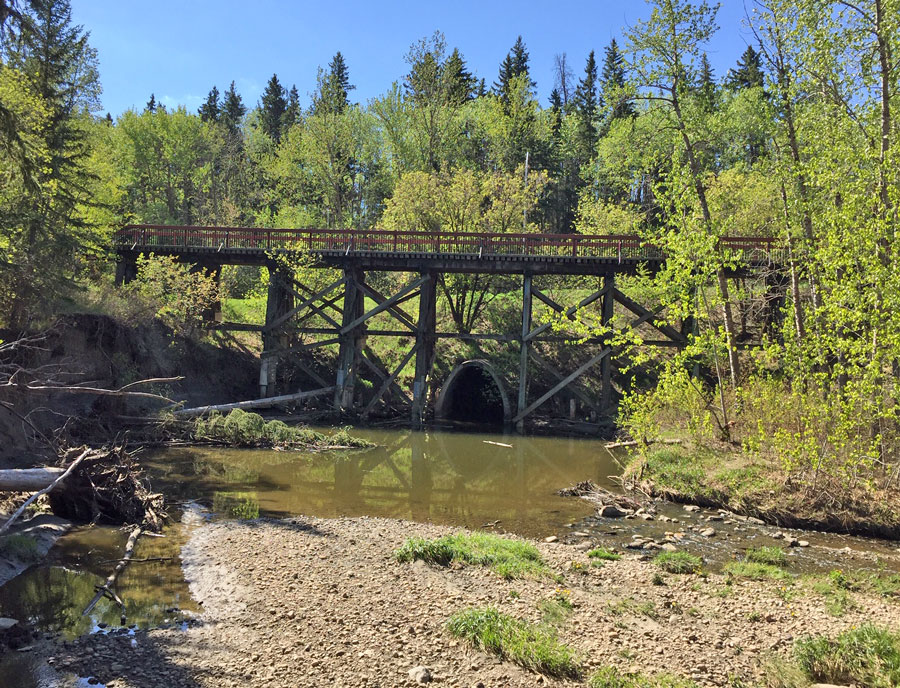 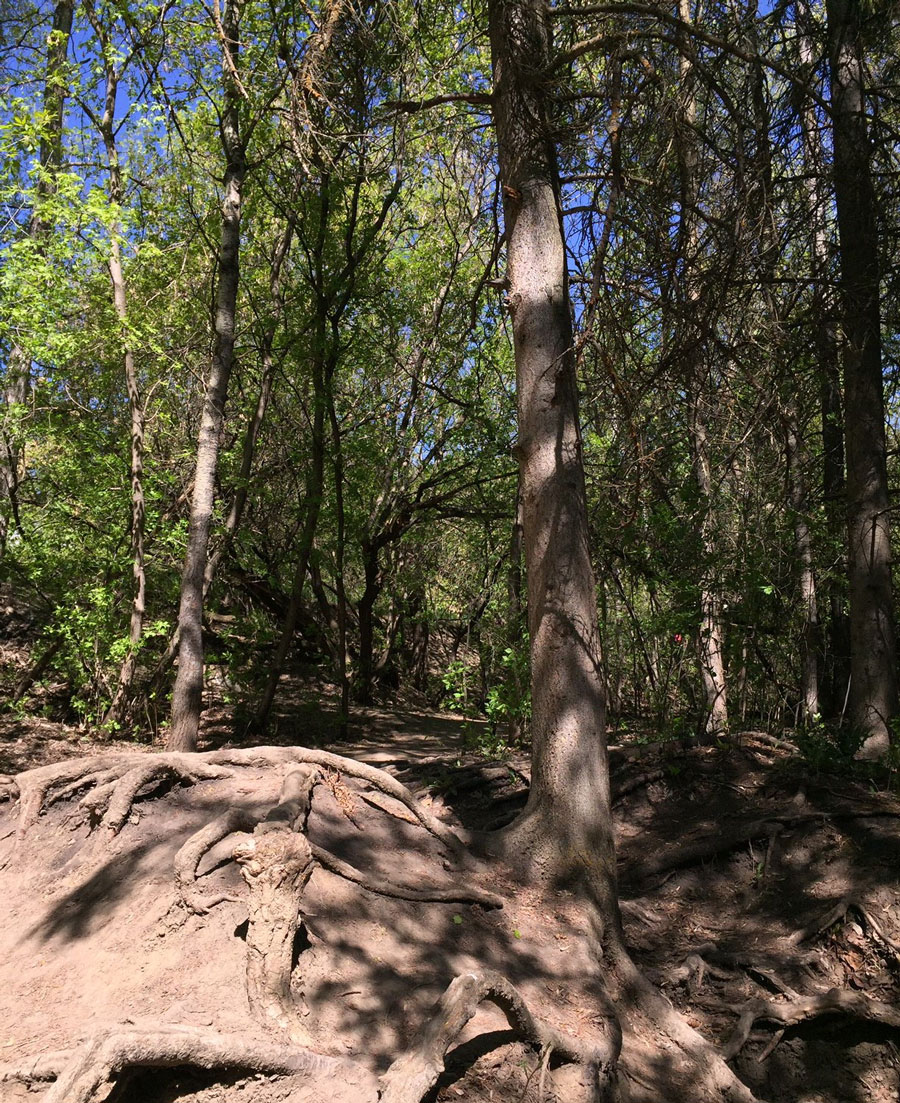 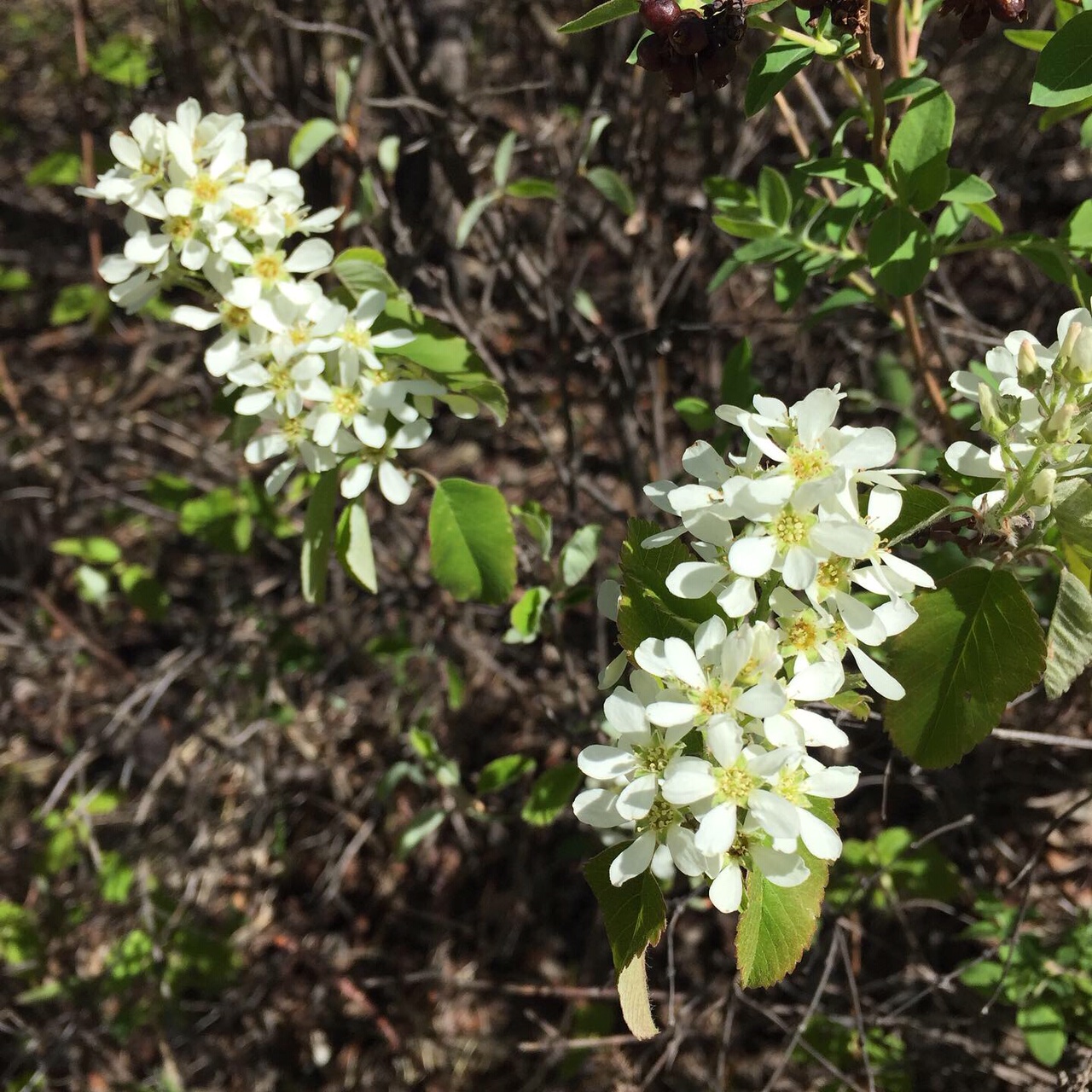 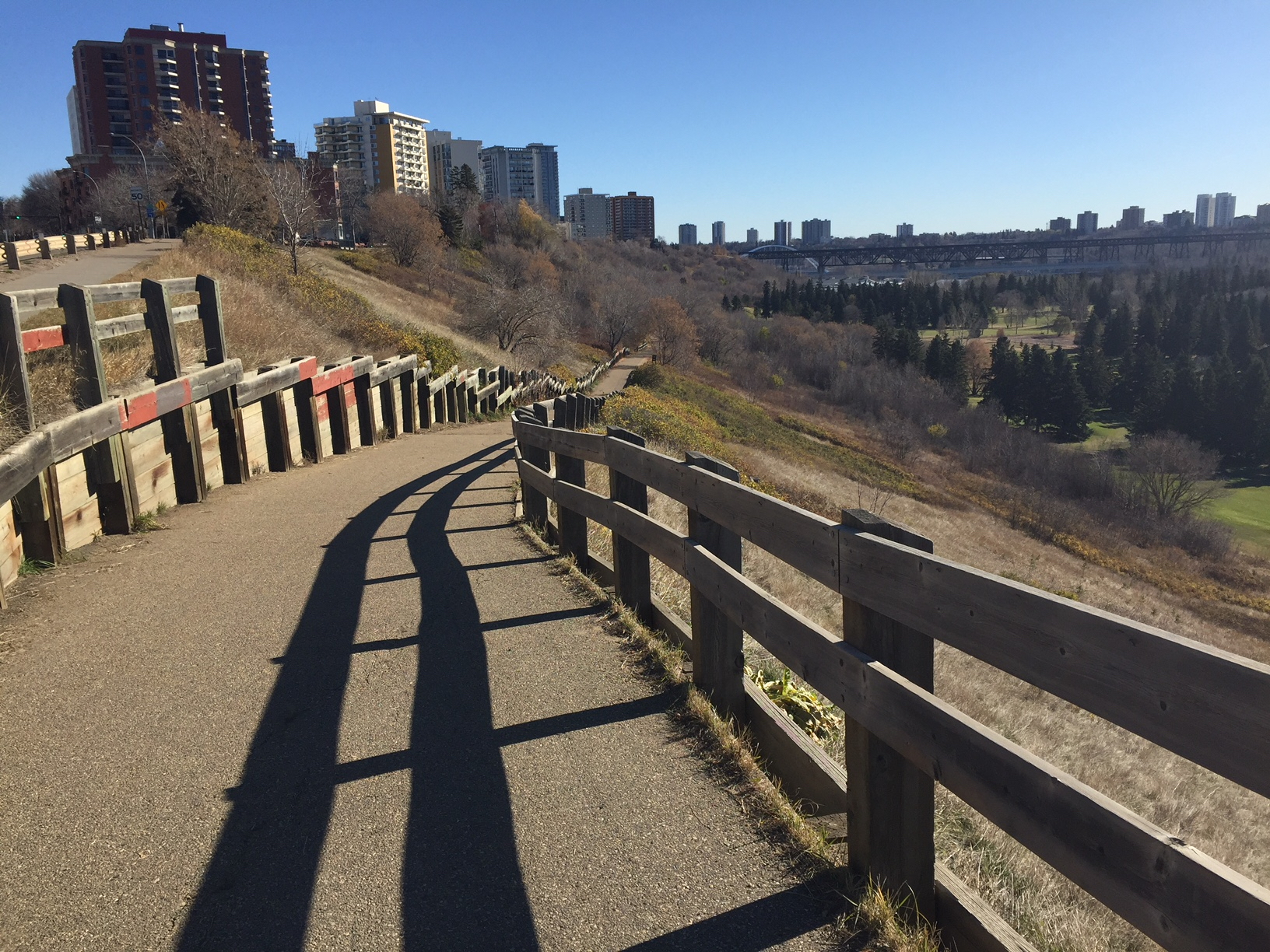 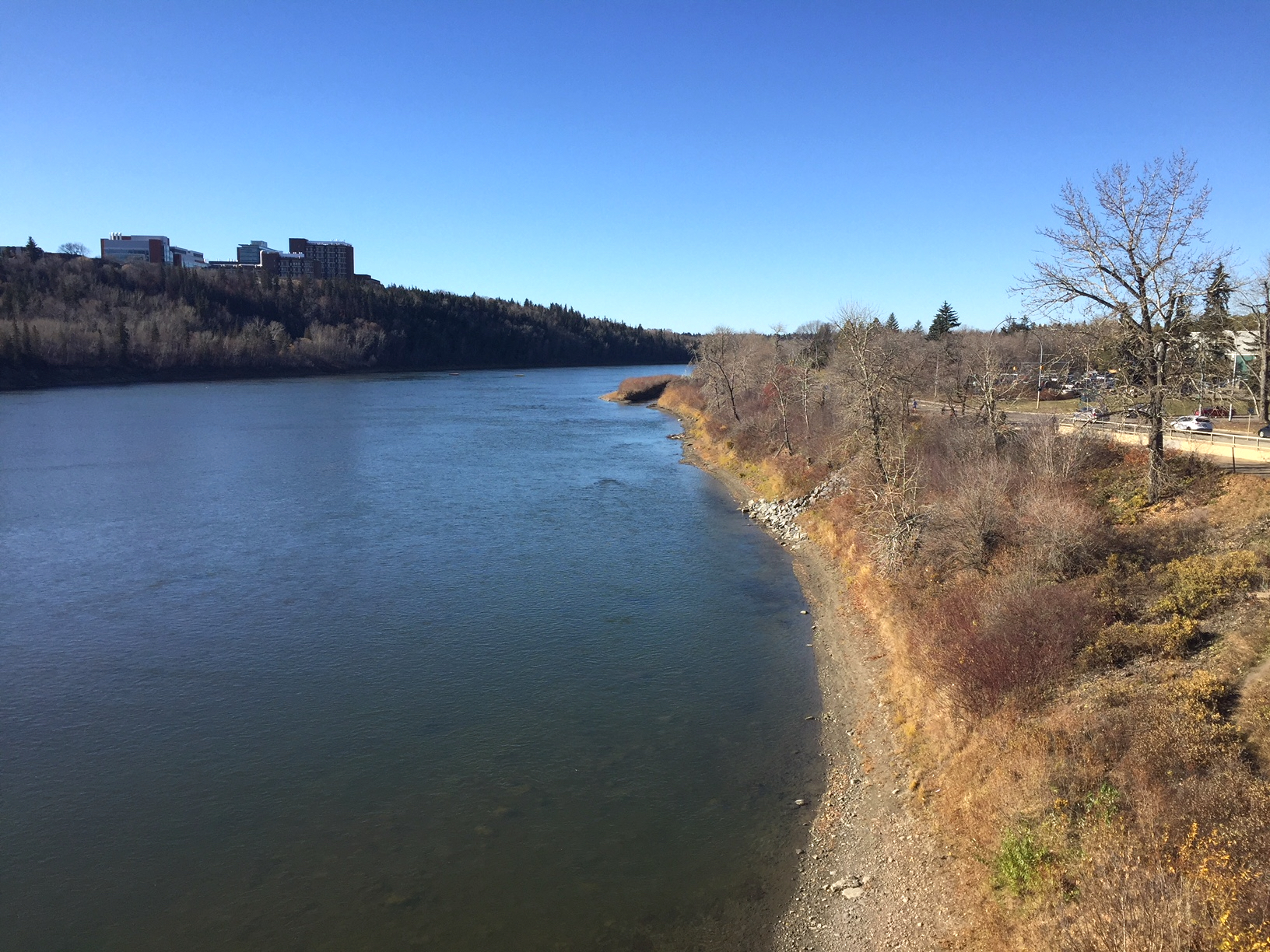 Well, I don’t want to overstate it. However, today –  the first day of Canada’s legalization of Cannabis, summer returned. Blue sky, a temperature of 25C!! and some non-cloud clouds here and there as people everywhere seemed to be imbibing. It was a happy day. And a beautiful day. Not that I use, but it seemed to lift the mood of the country, or maybe it was just the weather.

Once the second dump of snow left in early October, it was like it took the rest of the leaves with it. What emerged was no longer peak fall, but full on, leafless fall. It too is beautiful, but like all the seasons this year, it seemed to come all of a sudden. 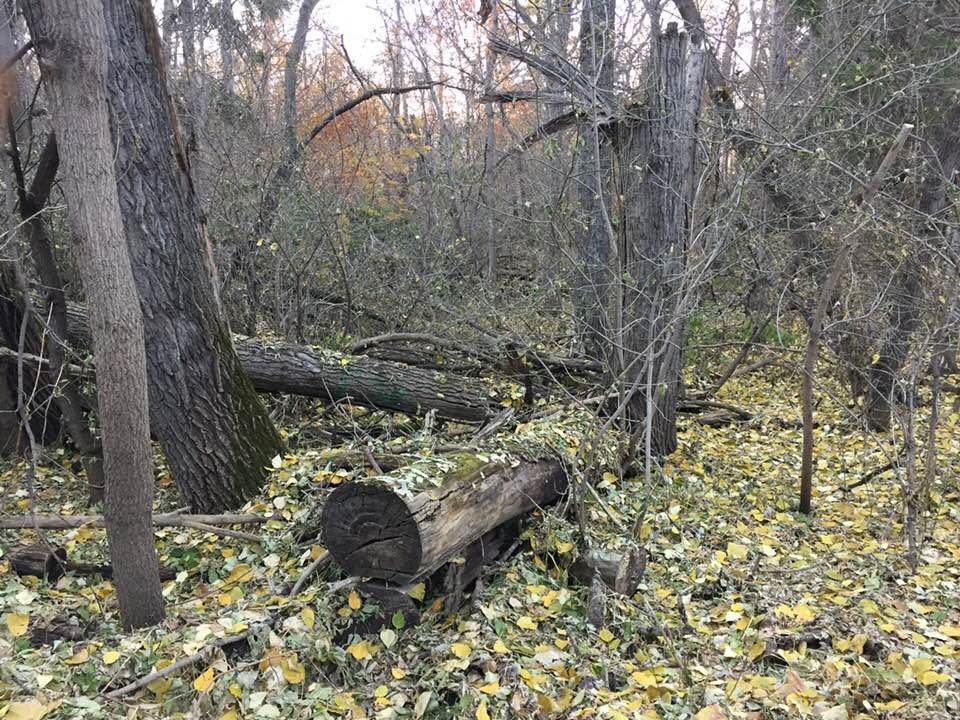 Walked home from work, down into the woods and then up to the Legislature grounds. Nothing spectacular…I unfortunately had to stay a bit late. But still, it has been a gorgeous October for the most part. About time, after the weather suck that was September. 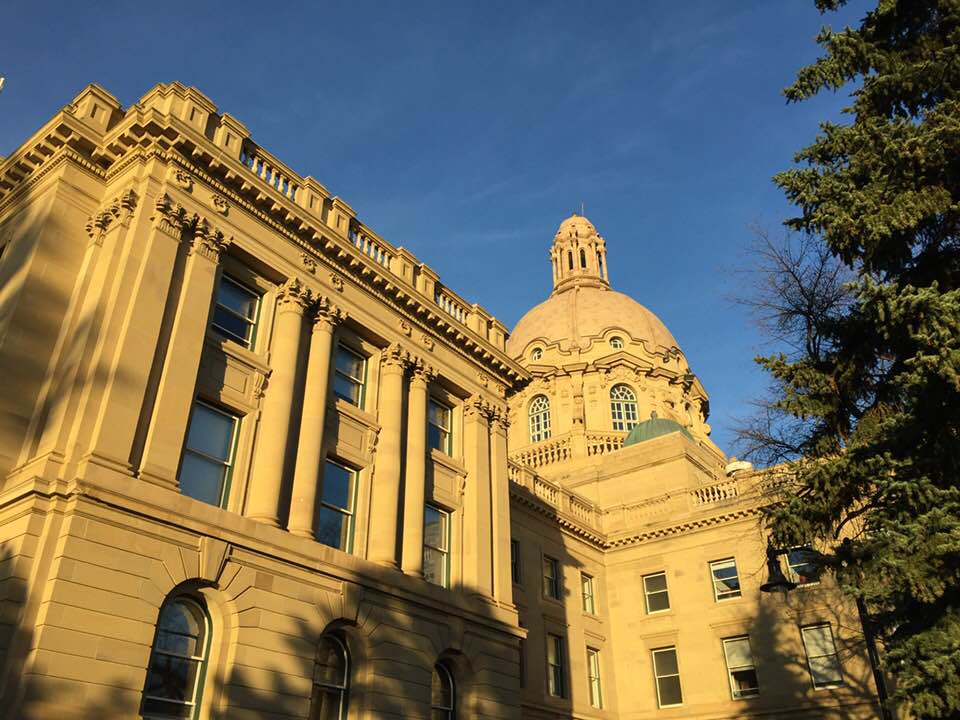 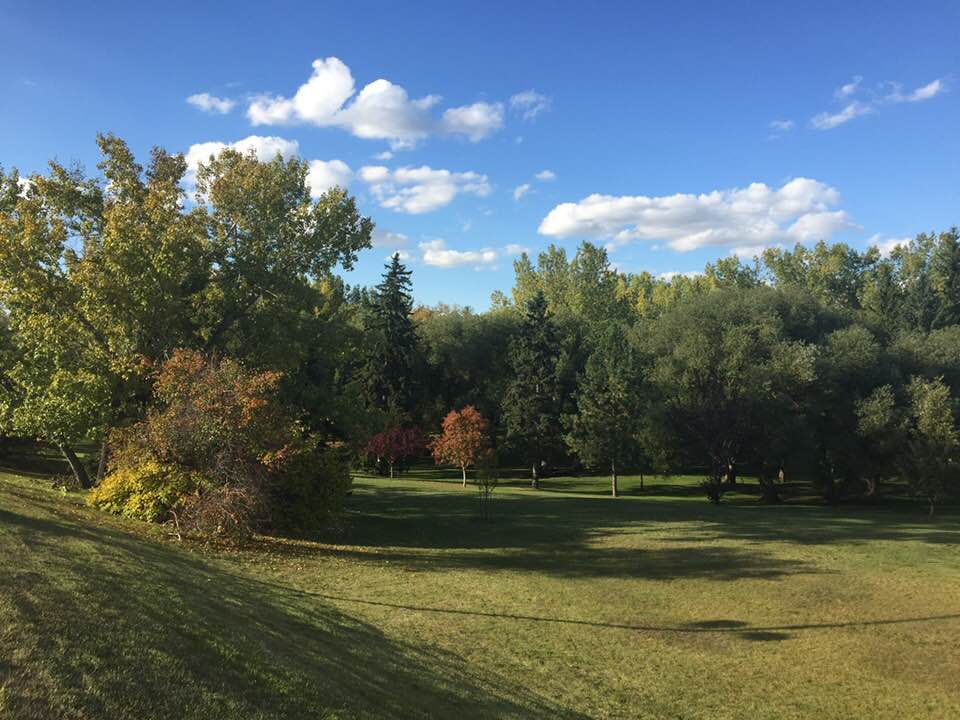 Yes, it’s still technically summer, but in Edmonton in the middle of September, especially this September, it’s just a word that elicits fond memories of a season that has already passed.

But yes, Wednesday, after a week (or is it longer?) of inclement weather, it was finally nice enough to really enjoy the changing colours of the river valley. And it was beautiful, especially against a blue sky. How I have missed you! 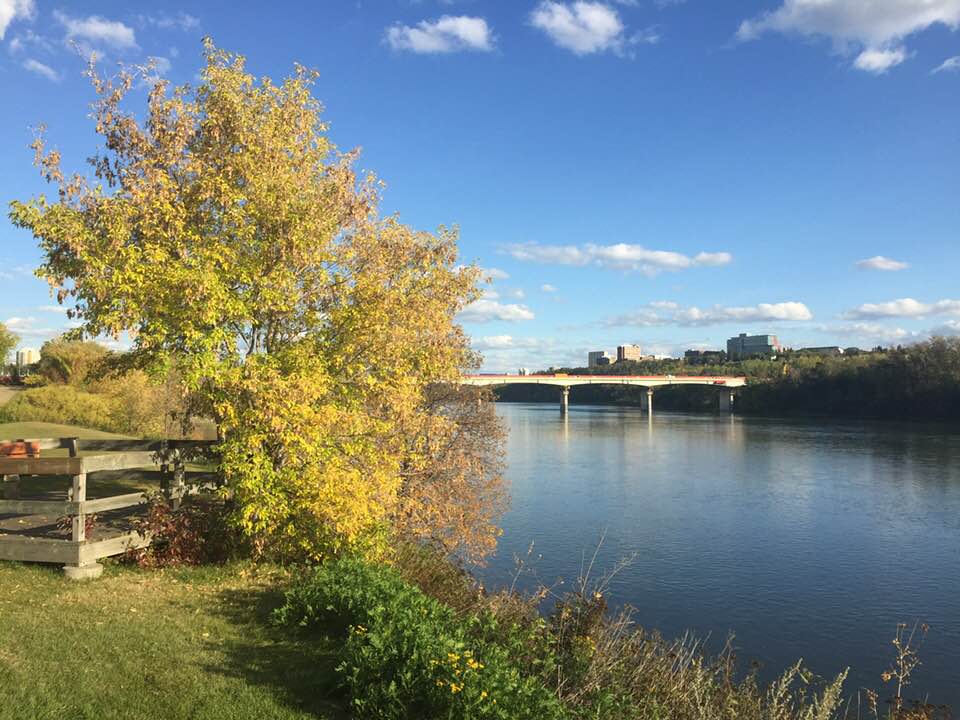 I walked from the university, over and then under Groat Bridge, and then west through MacKinnon Ravine and finally Glenora, followed by Oliver. About an hour of gorgeous vistas and autumnal scents. 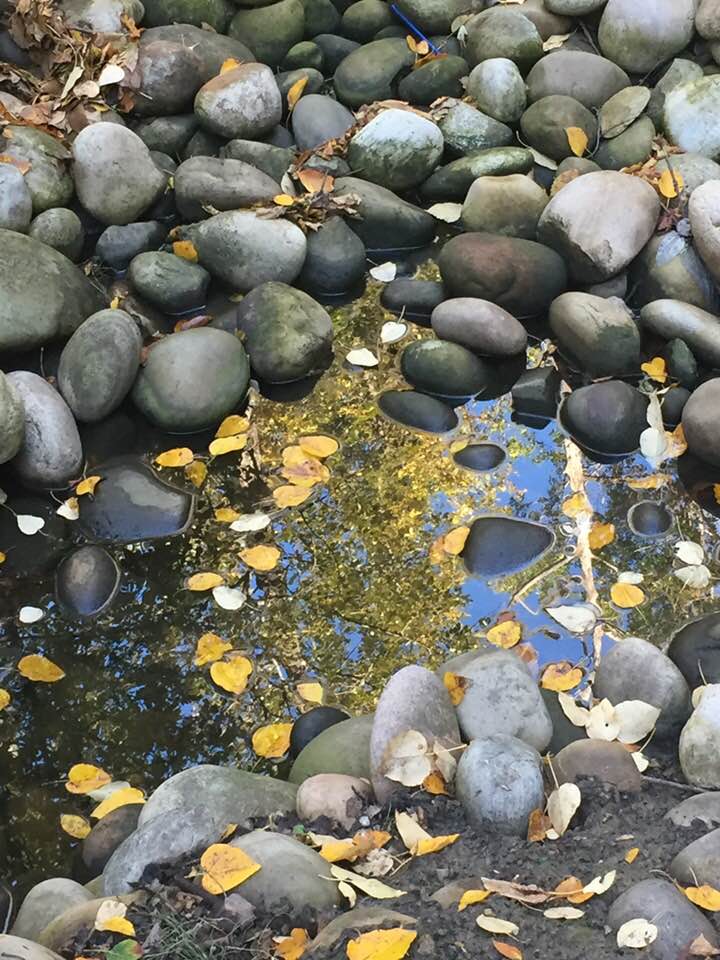 And a random wasp nest. 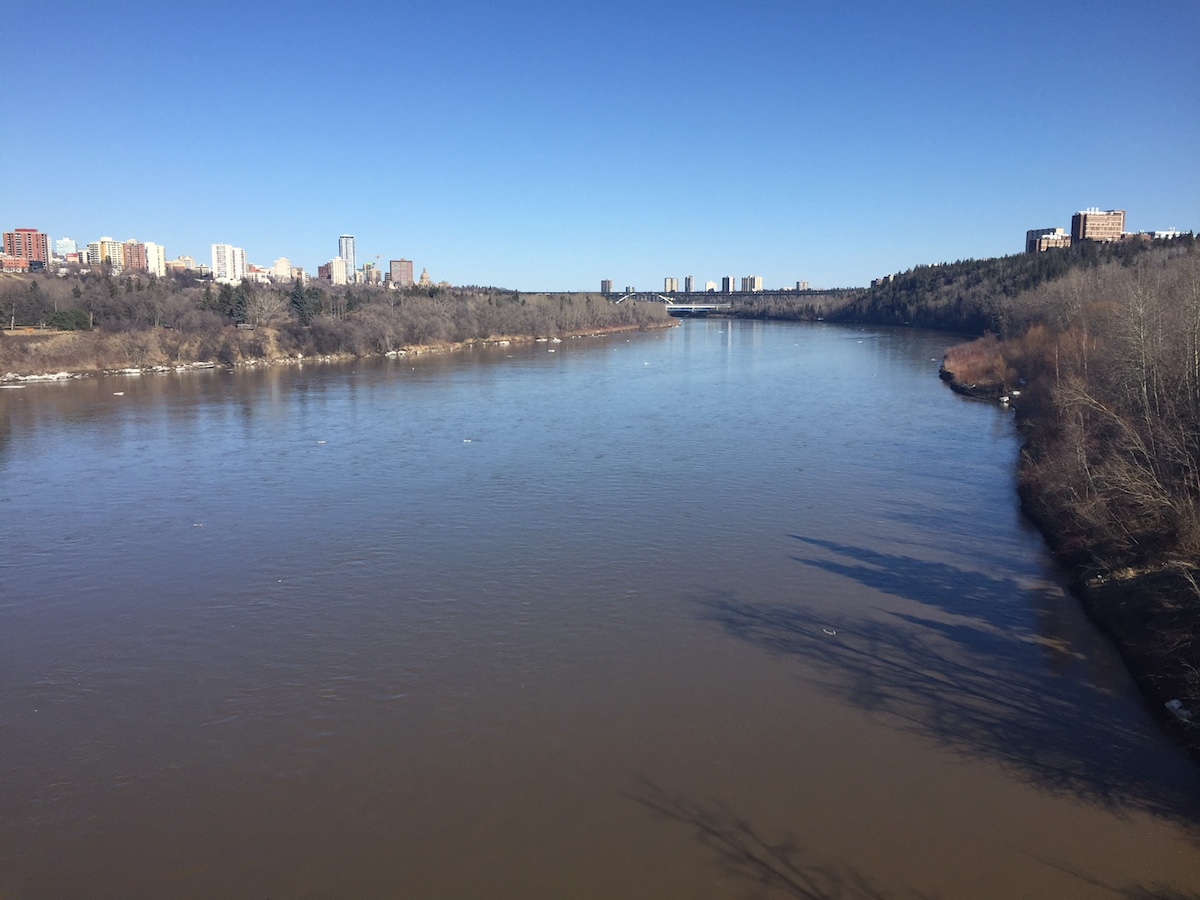 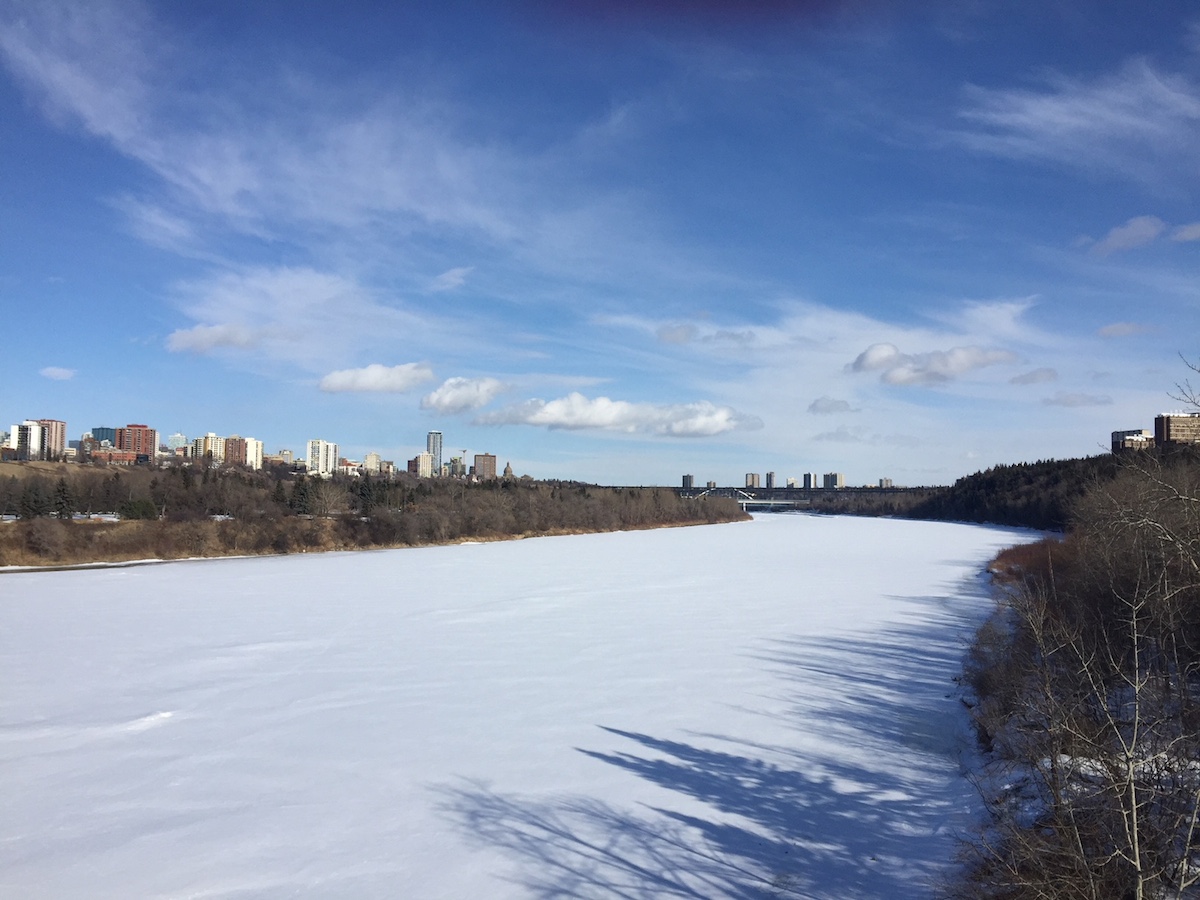 And suddenly, the river is open! Suddenly, in terms of what amounts to a weekend. Not suddenly, when you realize spring arrived on March 20, notable only for its absence. Still, I am grateful for the beautiful day and weekend we had, which consisted of rain (but not snow) on Saturday and hurricane-force winds (but sunny!) on Sunday. I was going to take Stella for a walk on Sunday, but she was limping and I was working, so we played in the backyard instead.

Today, for my 40 minute walk home – gorgeous, warm and calm. I took the Groat Bridge route to see what this first day of a three-year construction project would like, and it was no problem. The pedestrian path is not yet affected, but it will be. As for the traffic, it’s one lane each way. This won’t be a fun rehabilitation, but hopefully, this route will be accessible in some form for the duration. I will be taking other routes for the rest of summer.