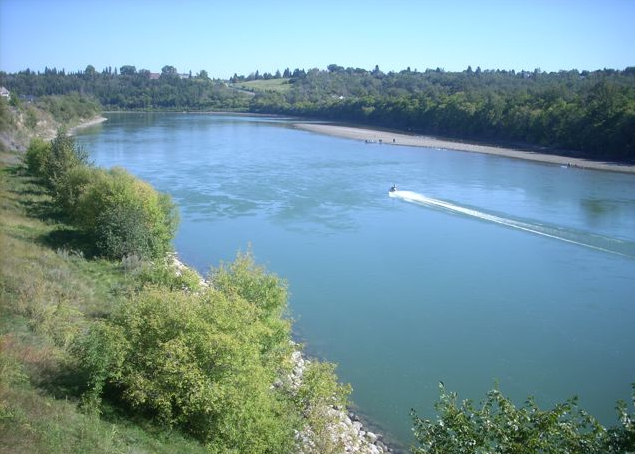 A beautiful, gorgeous day, especially after I left work. Yes, that time of year, but I only stayed for about four hours and I was outta there by 1:30…plenty of time to enjoy the day and shake off the pesky remnants of an exhausting week. Walked through the Kinsmen and then Skunk Hollow (via Queen Elizabeth Park), a route I haven’t taken for a very long time. It was its usual lovely self, in spite of my absence. The leaves are lemon-lime, and quite brittle-looking, especially the poplars. They’re the first to ‘go’ in Autumn, although technically it’s still summer.

After a jaunt through the monkey trail above the North Saskatchewan, headed into Louise McKinney Park, which was full of Saturday river valley enjoyists, like myself. As per usual on the weekend, there was a wedding party on Cloverdale Pedestrian Bridge having their photos taken against the backdrop of the city. Also, as per usual, I was taking photos in the opposite direction. The river is low again, enough to make seagull island visible. By the sound of the squawking, the seagulls were very happy about this. A few people and a dog on the island as well, which may or may not have made the seagulls happy. The river is in late summer turquoise bloom, a colour that is difficult to capture on film, but splendid to behold on a warm Saturday afternoon.