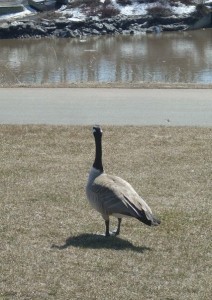 Could’ve used my shorts today, wherever they are, and a sleeveless t-shirt. Incredibly nice and warm. I was one of hundreds of bodies on the trails, which included butterflies fluttering about on the upper trail in Mill Creek. They are deep brown with a yellow fringe on their wings, and they always return to the same part of the trail in early spring. So early I often see them perched on the snow. All the gang is back, in fact: the spiders, ants, and all the little flying things that make the atmosphere seem summery even when there are still mounds of dirty snow just about everywhere. Can’t help but be grateful for their evocative presence.

There were many, many people in Louise McKinney Park enjoying the sun or a bit of exercise. Kinda flies in the face of those who think no one ventures into this little parkette unless there is a dragon boat race or some other major draw. Nope, today the draw was the warm weather, the chance to be close to the river, and the variety of trails in and around McKinney. The City is once again building something along the main trail. Not sure what, but there is an ugly little detour, and even the lowest part of the trail, which is both paved and unpaved, is partially blocked off. Hope it’s not another public washroom.

Lots of geese about, including one lone goose who looked rather lost in thought, if that’s possible. They seem  a mile

wide and an inch deep to me, but what do I know? I believe there are five geese living in Louise McKinney Park and vicinity. Also, countless ducks, none of whom appeared particularly thoughtful.

I looped back through Mill Creek, which still has some major muck going on, but not enough to warrant boots. Wonderfully fragrant in the heat of the afternoon. A bit of rain and we might just see some green.