I seem to be out of sorts today so my walk home was more of a wander. An aimless wander through downtown and eventually, the river valley. While I was still downtown in the vicinity of the Hotel MacDonald, I passed a very happy guy who had a large, wooden skeleton in full grimace dangling off his shirt (which was open to his belt.) He also had a Canadian Flag stuck in his chest pocket. A patriot, and three days early!

Minutes later, I found myself in Louise McKinney Park facing what looked like the remnants of an ancient Druid stone structure, or perhaps a veiled message to the aliens. The symmetry of the formation does suggest a code of some ilk, although I have to assume that if aliens are capable of space travel, their communication skills would have evolved beyond that of cleverly piled rocks. So, I don’t know. Well, actually I do know. Now. It’s part of The Works festival, and it’s called The Turtle Rock Effigy, by Leah Dorian. A Turtle Rock Effigy must be code for something, but I’m too tired to look it up. 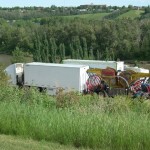 Michael looks for a place to amuse himself

Further along, I spotted several large trucks parked near the stairs. One of the trucks had Michael’s Amusements written on the side in a jolly sort of font, and above that, a not so jolly face of a clown. Another truck had a dismantled midway ride strapped to the side. There were several shirtless guys standing near the trucks, looking a bit sad, like the clown. As mentioned, Louise McKinney Park is beautiful, but small, and unlikely to attract a crowd large enough to justify Michael or his amusements, even in combination with the Turtle Rock Effigy. I’m sure there is a reason, but again, I am too tired to investigate. Suffice to say, my sortlessness was not helped by these encounters. Not at all.