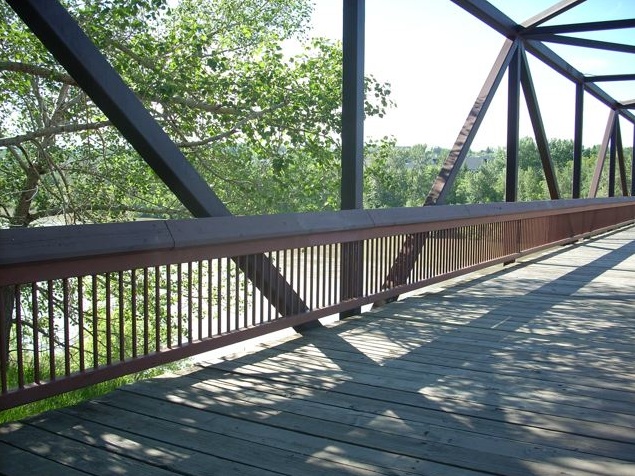 Rolled out of bed and into the river valley this morning. It’s the best way, really. No worries about hair, and there’s the smug factor; I got up early and I DID something! As opposed to, I got up late and stared into a bowl of Nut ‘n Honey for an hour.

Even though it was only 14C when I left, I managed to work up a sweat on the various hills and staircases along the trails. Took the monkey path behind Skunk Hollow, and then Low Level Bridge, etc., Saw a few more worms hanging from the trees near the bridge, so Rossdale is definitely out until July. Took a picture of a worm but a photo just doesn’t capture the tiny horror of the thing.

Passed by a woman who was walking her basset hound. She had earphones on and the music was so loud I could hear it clearly from a distance. I don’t get it. The woods, especially in the morning, are a symphony. The creeks are babbling, the leaves are rustling, the robins and warblers are singing their hearts out, and she’s choosing oblivion? I even felt sorry for her dog, who probably would have appreciated a more engaged walking companion. (Unlike cats, dogs enjoy that ‘shared experience’ thing.) I blast my iPod too when I’m walking, but only when I’m next to traffic, and never in the woods. It’s unsafe, and there’s no music that can compete with water burbling over rocks.