Today, Tuesday, on the second day of the merry month of June, from 1:30 to 3:42, I experienced the best walk of 2010, thus far. Just a gorgeous day. Warm, sunny, and waiting in front of me, an entirely new trail to explore. I’m ashamed to admit that in all the years I’ve been walking in the river valley, I’ve failed to connect with the southern part of Mill Creek, simply because…well, I don’t have an excuse. However, today…I walked up to 76th Ave (Mill Creek extends to 63rd), and took my first enthusiastic step into the southern end of Mill Creek Ravine. Have to say, and I am biased on this issue, Mill Creek is the loveliest neighbourhood in the city. Just the walk to the ravine was fabulous, once I veered off 99th street. The houses are mostly small, but incredibly well-kept and funky. Big trees. Lots of birds. And then there is the ravine…that beautiful, meandering thing steps from everyone’s door in Mill Creek. I feel very lucky to live in this neigbourhood.

There are many access points into the ravine. Sometimes they take the form of gravel or paved paths, but most often it’s a set of wooden stairs, which is what I encountered today at the end of a dead end street near 76th 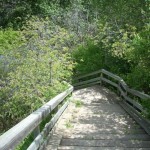 . Hard to explain the excitement I felt descending into an unexplored area of the river valley. As a card-carrying nerd, I spent most of my childhood indoors reading or drawing, so my particular form of mid-life crisis is all about getting lost in the woods. Maybe one day I’ll even climb a tree! Nah. Who am I kidding? Gracelessness is not something you outgrow.

Back to the trail…

Like Mill Creek Ravine north, the southern end has many little wooden bridges. Within a very short distance, I counted four of them, each one lovelier than the next. The ravine seems deeper here, or perhaps the trees are just taller. Twenty minutes into the hike, I was under the bridge on 82nd Ave, and shortly after that, Mill Creek Pool. Tomorrow, if it’s not raining, I’m going to start from 63rd.

On an adjacent path near the pool, a fellow was playing his fiddle. No, that’s not a euphemism. He had a real violin, and he was standing in full sunlight on a hill, playing a tune, and playing it very well. I’ve encountered musicians a few times in the river valley playing their instruments for the amusement of the squirrels. I understand the motivation. It’s like dining al fresco; tofu weenies, or whatever is being served, just tastes better in the great outdoors. Same with music. As a frequent visitor to the Folk Fest, I can attest to the fact that something happens to a song when it floats on a breeze and mixes with other ambient outdoor sounds, like birds, and even airplanes. I can also attest to the fact that this transcendent experience ‘on the hill’ at the Folk Fest rarely translates to the recorded version, although my skin doesn’t burn quite as badly when I listen to a CD.

After Mill Creek Pool, the trail branched off in several directions, one of which led to a familiar path. I continued walking for another hour. Why stop? It’s not like I have a job or anything. At least not this week.