Seems like an entire season has passed since I posted something here, but it’s been just a little over three weeks. In that time, or more specifically, in the last week, fall has arrived. The last week of August was cool and rainy (as opposed to the entirety of summer – which was warm and rainy). I have a few days off, and this morning we took the neighbour’s dog Teddy down to the ravine, and it was positively autumnal. Leaves along the paths, wet and cool, the sour (and evocative) smell of rotting foliage. The temperature forecast is in the teens for the foreseeable future. What happened??

Teddy of the Trails

I have been walking, just not posting. Mostly, it’s been with Tom, in and around Whitemud, with lots of after-work walks from the university to Glenora. All pleasant, of course. About a week ago we went for an evening walk down to the river, which was at its highest this year. Funny, when the City of Edmonton announces that the river is peaking and for people to stay away, it always has the opposite effect. Even on that rainy evening, the banks were full of looky-loo’s like us, admiring the power of nature. 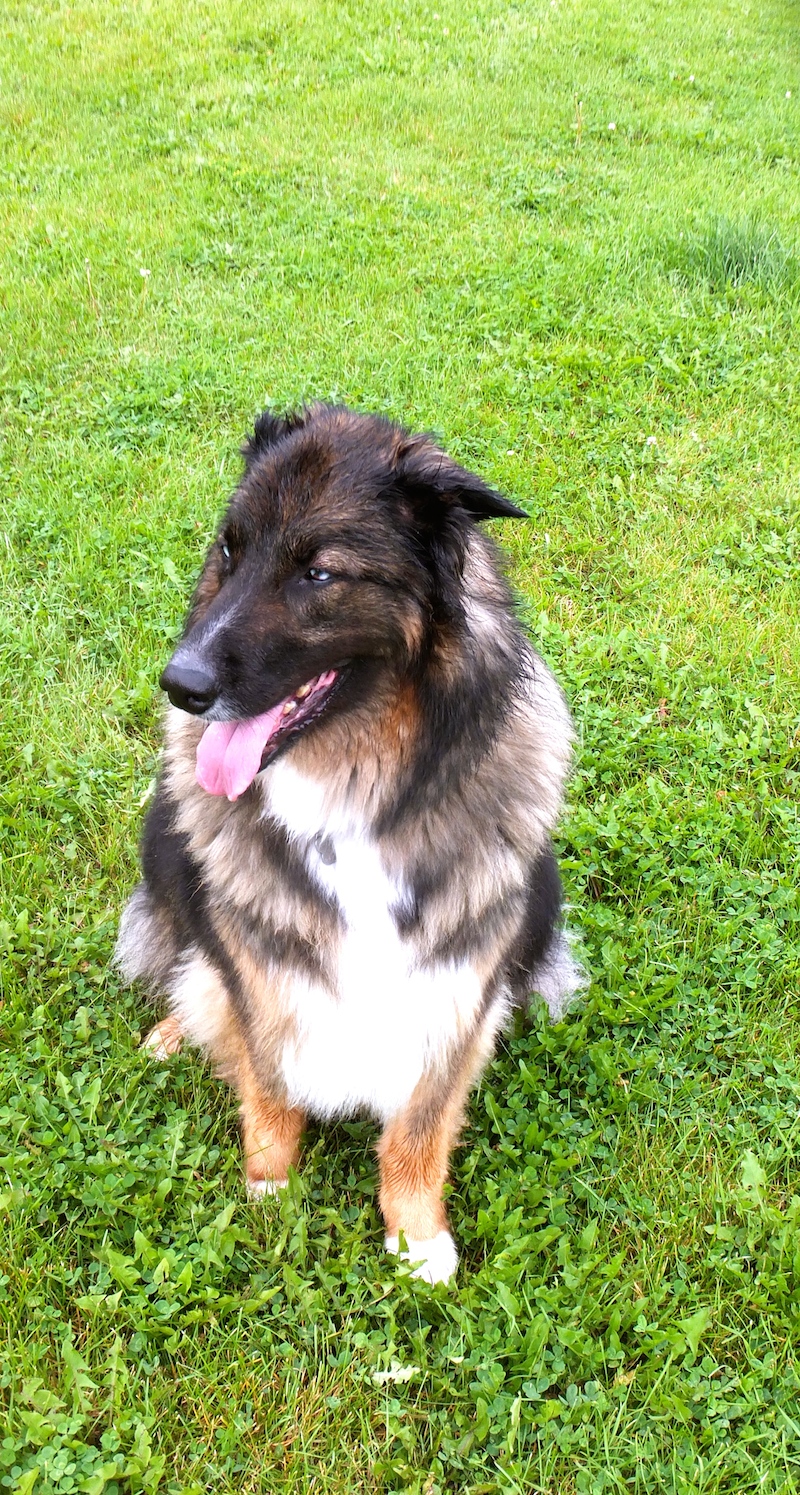 So much rain this summer. The grass is a deep emerald green and Sharon’s garden has never looked so beautiful and lush. And yet, the trees are starting to look dry and yellow. A sunny, hot day would largely erase the signs of fall. Above ground, that is. 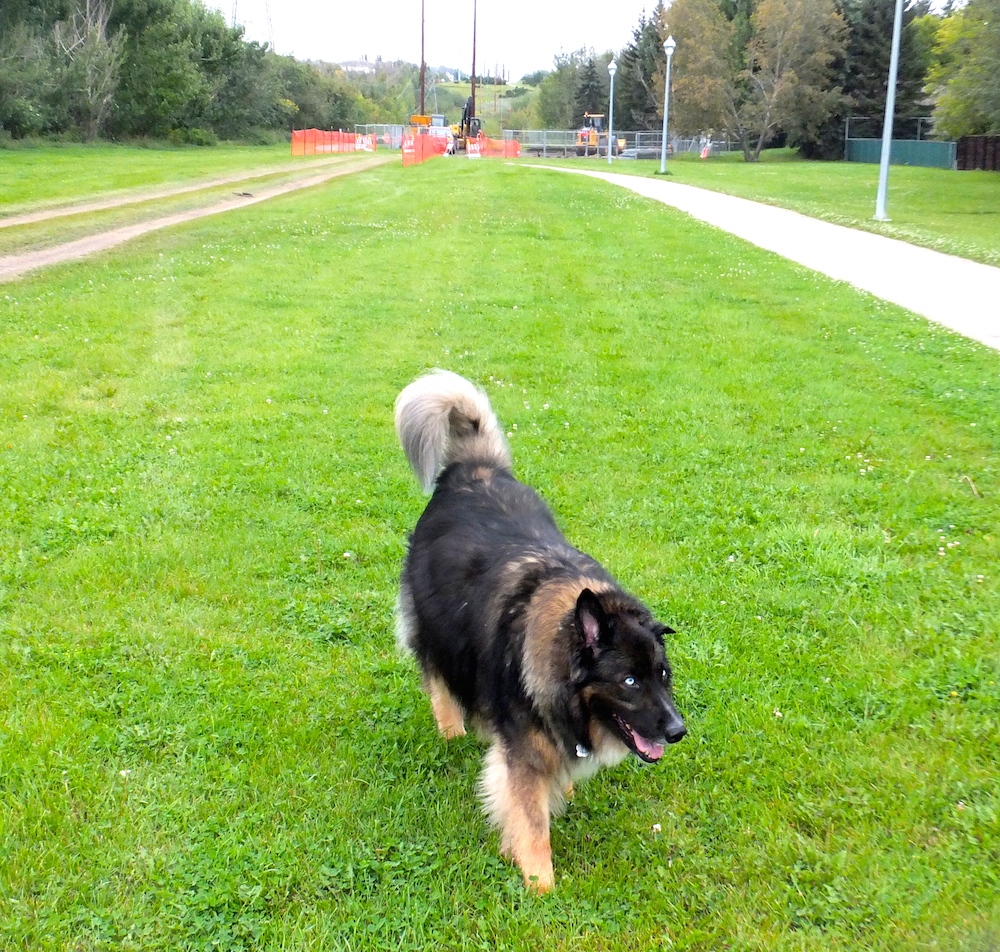 Teddy of the powerline

Walking with Ted was wonderful. It’s been about a year since Maggie has been able to walk into the ravine, and I really miss having her beside me. Ted is a gentle giant, with piercing ice-blue eyes. He is actually a Great Pyrenees cross, but there must have been a husky in the woodshed at some point to account for those laser eyes. Though he’s a friendly doggie and happy to meet and greet the other dogs on the path, like Maggie, he’s a people person. It was no trouble at all to keep him close to us.

Teddy of the bush

Sharon, Teddy and I took the path into Whitemud Ravine via the powerline. The bank is collapsing again, so there was machinery and workers about, putting in some kind of an emergency ‘band aid’ fix (their words) to keep the water from flooding and taking out the bridge like it did a few years ago. At the bottom of the hill just past th bridge, we took a right into the woods. The path is still lush and overgrown, but about two weeks ahead of the rest of the ravine in terms of seasonal change. The trail was soaked in rain and fallen leaves. Ted’s face and fur was beaded with moisture but he seemed very happy trotting ahead of us through the dripping bush. We even spotted what looked like some moose tracks in the mud. 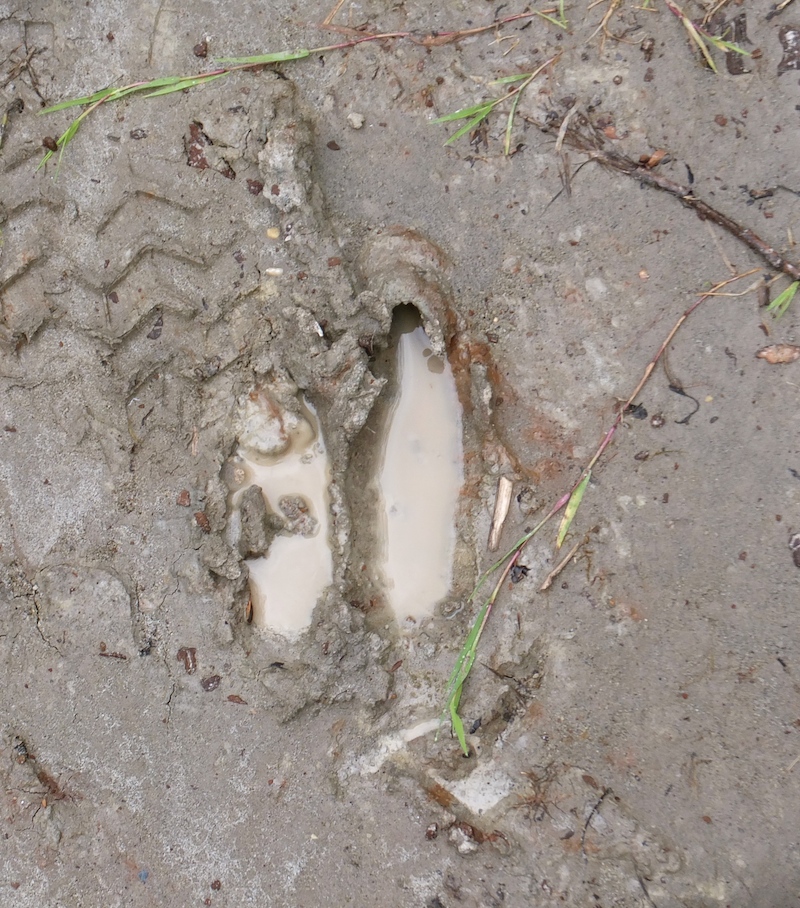 By the end of the hourish walk, all three of us had soaked feet/paws. Teddy rolled in some green grass to…actually, I’m not sure why dogs roll in grass. They seem to really enjoy it. He DID NOT enjoy going back into his house, but I think we were all in agreement that it was a fantastic walk. For October.