The hoodoos of Whitemud

Everywhere we went! Started out on the path below the ski hill, north Whitemud Creek, I believe. Very beautiful. Denser, and more undulating than south Whitemud. Reminds me a bit of Mill Creek. We were on our way to the trail that winds around Fort Edmonton Park so that we could pick saskatoons.

However, a lost cell phone took us briefly back home, where the cell phone lay nestled amongst the morning newspapers on the kitchen table, and not drowning in a puddle somewhere along the path, as we’d feared. So, back to the trail, but this time we drove over to the staircase that leads to path under the Quesnell Bridge. First time I’ve been up close and personal with the Talus Dome, the $60,000 collection of silver balls just to the side of the freeway. I have no problem with the balls, just the location. It’s tough to see from the road. I can imagine it on Rice Howard Way, or in another more pedestrian area of the city, and I think it would be kinda cool, but here it looks like a truck spilled its load.

Blinky of the North Saskatchewan

The trail by Fort Edmonton runs along the river. We chatted with a nice fisherman, who came up empty-handed fish-wise, but was carrying a fair amount of gear. He told us about all the different types of fish in the river. “Oh, you wouldn’t want to eat them, of course. Or at least not often. Lots of mercury. They look good, though.” I said, “No three-eyed fish then?” He laughed. “Nope. No Blinky’s.” Heh.

The Saskatoon bushes (trees?) were all over, but many still had green berries. However, we did find ripe berries in the higher branches. Sharon and I took turns pulling down branches so that we could pick the fruit, as we were not in possession of Coppernickel’s tool for picking high-hanging elderberries. 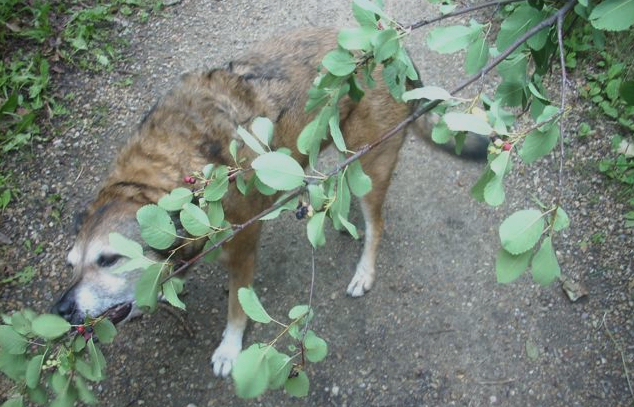 Maggie is a champion berry-picker. She cleans the lower branches as if she was born to it, although rather rudely, she did not add to our bag, keeping all of them to herself. After about half an hour, we had a bag full of berries, and our fingers were running purple with juice. They are very tasty. Like blueberries, only purple…