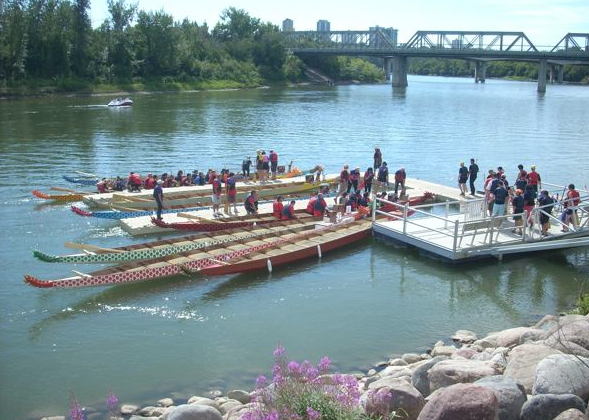 Against my better judgement, I ventured out in the early afternoon for what turned out to be a marathon walk. It was hot, but I made a point of leaving the shadiest parts of the walk for the second half, to prevent a premature death from heat-stroke. Headed over to Louise McKinney to watch a bit of the dragonboat races, which is always very entertaining. As I strolled by, three teams were boarding their fire-breathing vessels for the final race. 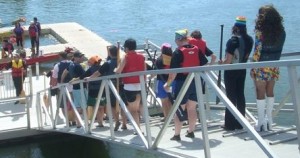 Not your average drummer (far right)

The drummer (coxswain) of one of the teams was dressed in long, curly wig, flowery dress, and some really kick-ass white leather platform boots. Awesome. Simply awesome. Gotta say, I enjoy a hairy-legged man in disco boots, especially when he’s yelling commands at me. Lucky girls. I didn’t stay to watch the end of the race, as I had a date with the shade, but when I left that team was in second. I hope they pulled it off.

Last year, the city was engulfed in smoke from forest fires. There was some question as to whether or not the dragonboat races would proceed, but the valiant rowers persevered. I suppose dragonboaters are used to smoke, albeit smoke from dragons, not trees.

The south Mill-Creek section of the walk was cooler, although when it’s 30C outside, the heat and humidity penetrates right through the shorts. Just sayin’. Followed up my righteous two-hour walk with an equally righteous chocolate milkshake from Route 99. It’s not so much a case of self-sabotage as it is self-cooling. I’m just that smart.